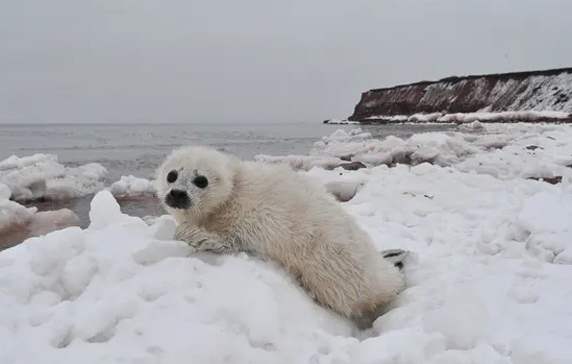 It’s not the first time the seal pup observation season has been cancelled – since 2010 there have been five winters with insufficient ice in the Gulf of St Lawrence due to unseasonably warm temperatures.

“It takes four months to build up a good ice cover,” says Peter Galbraith, an oceanographer with Canada’s Department of Fisheries and Oceans (DFO) and a climate emergency specialist for the gulf. “You need December, January, February and March to be cold. That’s the ice season. A few days at -20C aren’t enough to form good ice.”

Little or no ice, or ice of poor quality, is not just a problem for the tourists, who can’t land in a helicopter, but also a problem for harp seals. They migrate to the Gulf of St Lawrence from the Canadian Arctic and Greenland in December, giving birth in late February to early March. As “ice-obligate” animals, harp seals need ice as a platform for having their pups, suckling and for the first few weeks after weaning when the pups learn to swim and feed themselves.

Mike Hammill, head of the marine mammal section and a pinniped, or seal, expert with the DFO, says: “The ice needs to be quality ice. Seals prefer ice floes to be at least 30cm thick and they should also be fairly wide, about 36 metres.”

When the ice is too thin and unstable, pups can die. “The ice breaks up from the waves,” says Hammill. “Or you’ll get a storm come through and the swells bang the pieces of ice together and they grind up or break. Some pups may be crushed and others might get thrown into the water. If they’re repeatedly pushed back into the water they tire out and drown.”

Back in the 1980s and 1990s, tourists coming to see the “whitecoat seals”, as the newborns are called, used to generate as much income as the annual seal hunt. “When I started in 1990 [seal tourism], was going big guns at that time,” Hammill says.

But the situation now is a serious concern to the islanders, known as Madelinots, many of whom switched from seal hunting to seal tourism in the last few decades.

In the years when the ice cover was consistent, the whitecoat seals observation season would last four or five weeks. Now, two weeks is a bonus. “We normally get a few hundred people during the season, so that’s a lot of income lost,” says Mario Cyr, a film-maker, photographer, diver and seal-pup expedition leader. “And it’s something we love doing, that’s incredibly beautiful to witness.”

Guests come from all over the world, some year after year, to see and photograph the pups. “The Château Madelinot and the Îles de la Madeleine are unique in offering this experience,” says Bérubé, “because the coast of the islands really is the chief spot for observing the largest harp seal nursery in the world and we have good access to it.”

A cancelled season causes a great deal of disruption and disappointment.

Cyr, a born and bred Madelinot, says the loss of business is bad but he is also saddened by what’s happening to the seals. “Last year there were many more harp seal pup fatalities than in previous years.” Due to the lack of ice in recent seasons, harp seals have been forced to turn back east towards the coasts of Labrador and Newfoundland. “Sometimes the mothers tour the gulf for five or six days, searching for a spot where there’s enough ice to give birth,” says Cyr.

Before 2010 consistent ice cover was taken for granted on the islands. But after the past decade, “we’re all seriously asking ourselves what’s going to happen”, Cyr says.

Whitecoat observation tourism is not an easy business, says Bérubé. “I’m selling something I’m not sure I can deliver. For the magic to happen, the stars and the planets have to be perfectly aligned – there has to be ice, there has to be seals. But when everything falls into place and we go through with the season, the clients appreciate it 1,000 times over.”

As to the future, Cyr says he and his colleagues are worried but he knows that eventually seal tourism off the Magdalen Islands will come to an end.

“We need to keep in mind that seals always return to the place where they were born. So, if we skip a year, like now, nothing changes genetically for the seals. But if it goes on for three or four years in a row, during which the seals don’t give birth to their pups here, then they won’t come back because they will have changed their migration route. So for each year that we lose, that makes fewer who will return. These are the effects of climate change that are really visible.”

In 50, or even 30 years from now, “it will probably be an even split of years with sea ice on the gulf and years without sea ice, and 50 years later we’ll be at almost never,” Galbraith says.

For now, Hammill maintains that at 7.6m, the harp seal population is in good shape.