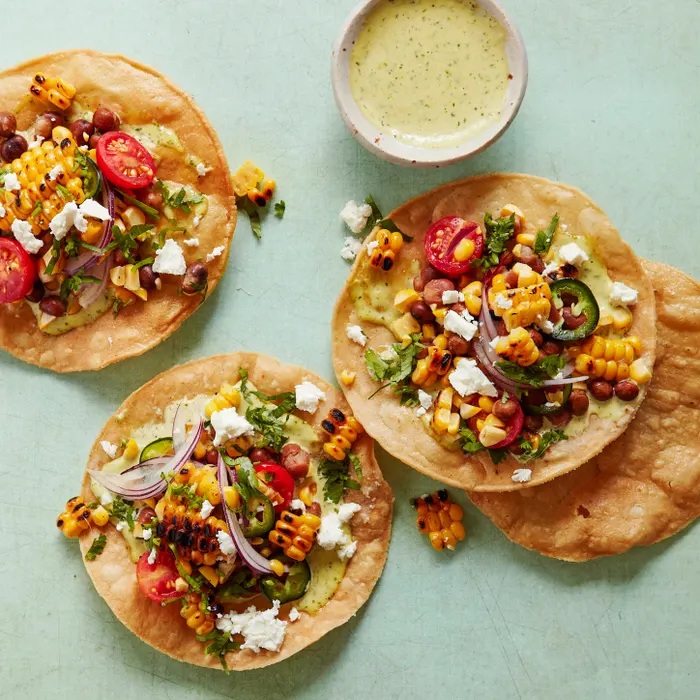 We have had versions of this vibrant, rich-tasting bean salad on the menu at Wahaca since we opened. In late summer, I like to toss in some charred corn, too, which is delicious on a crisp corn tortilla, especially when spread with a garlicky, roast jalapeño aïoli. The dangerously moreish aïoli adds a silky, background note to the whole dish, and an extra lick of flavour: the blend of fresh lime, sparkly chilli heat and umami garlic turns an otherwise wholesome dish into something infinitely more compelling.

Late-summer corn and the ripest summer tomatoes with a grilled, garlicky, chilli mayo on a crisp tortilla base. Hell, yes.

First char the corn, using a griddle pan or a barbecue. Remove the husks and silks from the corn, rub the cobs all over in vegetable oil and sprinkle with sea salt. Griddle, grill or barbecue, turning often, for six to eight minutes, or until blackened all over. Leave to cool, then cut off the kernels with a sharp knife.

Put the corn in a large bowl with the beans, vinegar, two tablespoons of olive oil, onion, tomatoes and the juice of two limes, and toss to combine. Slice enough of one of the chillies to get a tablespoon’s worth, add to the bowl with a few tablespoons of finely chopped coriander stalks, toss again, then taste and adjust the seasoning.

Heat an inch of vegetable oil in a deep frying pan and, once it’s sizzling hot, fry the tortillas until crisp; if you’re using pitta instead, cut out circles to the size of a tostada (use a cookie cutter) and fry until crisp (or, if you prefer, brush with oil and bake until crisp).

To make the aïoli, toast the remaining chillies in a small, dry frying pan over a high heat for seven to eight minutes, until blackened all over. Remove and discard the stalks, then put one chilli in a blender with the egg yolks, garlic, the rest of the coriander, roughly chopped, half a teaspoon of sea salt and the remaining juice of one lime. Blitz to a paste, then, with the motor still going, slowly, slowly pour in about 200ml vegetable oil (or 100ml each of vegetable oil and olive oil) in a thin, steady stream, until all the oil is incorporated and the aïoli emulsifies. Taste and adjust the seasoning by adding a little more chopped chilli, lime juice, salt or a pinch of caster sugar, as necessary.

Spread the aïoli on one side of the tostadas, top with the bean salad and add a few feta crumbs, if using. Serve as a starter, light lunch or part of a spread.

And for a simple flex …

To make this vegan, swap in a tin of chickpeas instead of one of the tins of beans and use the chickpea water instead of the egg yolks to bind the mayo. Or blitz garlic and roast chilli into a bought vegan mayo – there are some great ones around these days.