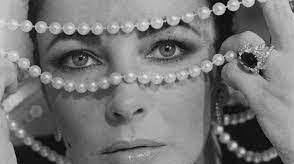 It was worn by kings and queens in paintings – and eaten by Elizabeth Taylor’s puppy. Matthew Wilson traces a history of La Peregrina – and of pearls in art.

It was spring 1969, and in the top-floor apartment of Caesar’s Palace in Las Vegas, Elizabeth Taylor was in a blind panic. Her most beloved item of jewellery, a drop-shaped 25.5mm (1inch)-long natural pearl, which her husband Richard Burton had recently spent a fortune on, had vanished. The pearl in question – known as La Peregrina – was one of the most famous in world history, prized for its size, perfect shape and impressive provenance. Before Taylor owned it, La Peregrina had been owned by some of the most powerful dynasties in European history, and had appeared in portraits by artists including Peter Paul Rubens and Diego Velázquez. Taylor was on her hands and knees, scouring every inch of the suite’s shag carpet, all to no avail. Then she noticed one of her Pekinese dogs dolefully chewing on something. “I just casually opened the puppy’s mouth”, she wrote in her book Elizabeth Taylor: My Love Affair with Jewellery, “and inside his mouth was the most perfect pearl in the world.”

The picaresque life story of La Peregrina is one that opens a door on to the significant role pearls have played in human culture as signifiers of beauty, power and wealth. Photographs of Elizabeth Taylor often capture her passion for natural pearls. They became synonymous with glamour and fame in the 1950s and 1960s, worn by women such as Coco Chanel, Jackie Kennedy and Marilyn Monroe: the celebrity aristocracy of the 20th Century.

But the cultural significance of pearls goes far back in history: it is believed that the earliest evidence of pearl hunting comes from the 5000s BC in various sites on the coasts of the Indian Ocean. An obsession with them led to the formation of some of the world’s oldest trade networks that linked the pearling centres on the coasts of India, Sri Lanka, the Persian Gulf and the Red Sea with the cities of the ancient world. They came to symbolise Aphrodite, the Greek goddess of love, who was believed to have been born from the sea. She is often represented emerging from a shell or wearing pearl earrings in Roman art, such as in Pompeiian frescoes dating from the 1st Century AD. A pairing of pearls and ideal beauty was forged very early in art history.

The Romans were particularly fanatical about pearls. In the 1st Century BC, Pliny the Elder described how “the topmost rank of all things of price is held by pearls”. The extraordinary funerary portraits from the Faiyum basin in Roman Egypt exemplify the obsession with pearl necklaces and earrings, even if the original owners actually possessed false ones fabricated from silver and glass. Real ones were so valuable that one Roman general in the 1st Century AD, according to Suetonius, could fund a military expedition by selling off just one of his mother’s pearls. Suetonius also claimed that the Roman’s invasion of Britain was inspired by the promise of pearling sites in the barbarian country’s rivers.

Even religions were shaped by pearls: the Parable of the Pearl in the Gospel of St Matthew features what must have been a common sight in the Roman world: a pearl merchant. It records Jesus’s comparison of a pearl to heaven itself, and the commitment that the believer should make when it is discovered: “the kingdom of heaven is like a merchant looking for fine pearls. When he found one of great value, he went away and sold everything he had and bought it.” A pearl’s scarcity, shapeliness and pure colouration also made it an apt symbol for Jesus. Yet early Christian writers like Ephraim the Syrian, Origen and Clement of Alexandria openly criticised people who saw them merely as items of jewellery and missed their true, Christian significance. Nevertheless, by the late Middle Ages and Renaissance pearls were incorporated into decorative crucifixes where they served as symbols of the purity of Christ and the Virgin Mary.

Wealth, beauty and spiritual purity: these were all the associated qualities of pearls when La Peregrina – the largest example yet seen – was discovered in the Gulf of Panama in the late 1500s. The fact that it was instantly sent to King Philip II of Spain speaks volumes about global geopolitics in the Renaissance period, and points towards another association that pearls possess in art.

Spain’s conquest and colonisation of parts of the New World began with Cristopher Columbus’s discoveries in the late 1400s. In fact, the first significant discovery he made in these new lands was a haul of impressive pearls. Echoing the Romans’ motivation for expansion into Britain, the Spanish were encouraged to commit to a full-blown colonisation because America was apparently a treasure trove of pearls. So, when you see a portrait of a Roman wearing pearls – just as when you see La Peregrina in multiple portraits of the Spanish Royal family who owned it – they don’t just signify beauty or purity. They also symbolise the exotic, money-making colonies and the immeasurable power gained through imperialism.

One example of this is a portrait of the Spanish Queen, Margaret of Austria (Philip III’s wife) by Juan Pantoja de la Cruz, where La Peregrina takes pride of place affixed to her chest. It is similar to a later equestrian portrait by Velázquez of Queen Elizabeth of France (Philip IV’s wife), where the pearl sits amid a sea of dynastic monograms and symbols on the fabric adorning the sitter. La Peregrina had been made a Spanish Crown Jewel, so it was also a symbol of royal lineage. It is mentioned as a treasured possession of the Spanish Crown in various memoirs of the 17th Century, including the French Duke of Saint-Simon and Mademoiselle de Montpensier, who recorded King Philip IV of Spain wearing it jauntily in his hat at the wedding of his daughter Maria Theresa to the Sun-King, Louis XIV of France.

Objects, such as La Peregrina, had to do the heavy lifting, symbolising the opulence and virtue of the women featured in these portraits

In Cruz’s, Velázquez’s and Rubens’s portraits, the women all look rather stiff, formal and inexpressive. This is because of the limitations that had been put in place for royal portraits in the Spanish court – the sitter had to limit themselves to a restricted repertoire of poses and no smiling was allowed. Objects, such as La Peregrina, had to do the heavy lifting, symbolising the opulence and virtue of the women featured in these portraits.

A few other sizeable pearls were sent back to the old world at this time including one confusingly titled La Pelegrina, which is of a similar shape to La Peregrina, and which was also originally owned by the Spanish monarchy. Yet another pearl with a similar drop shape as La Peregrina was owned by Mary Tudor in the middle of the 1500s. A 1554 portrait of her by Hans Eworth, which shows the pearl prominently, was owned by Elizabeth Taylor and Richard Burton when it was believed to depict La Peregrina.

The pearl depicted in Vermeer’s painting Girl with a Pearl Earring is most likely fake, or imaginary (Credit: Alamy)

The most famous pearl in art history is undoubtedly the one worn in Vermeer’s Girl with a Pearl Earring (c 1665), which is about the same dimensions as La Peregrina. However, it was impossible that the impoverished Vermeer could have gained access to a pearl even remotely as big as that. His one therefore must have been either entirely imaginary or a fake pearl made of varnished glass. Vermeer did include pearls in a large quantity of his paintings, usually as a token of wealth and status, but occasionally there was a religious subtext, such as his Allegory of the Catholic Faith (c 1670) where the pearls are a reference to holy purity – a subject dear to the heart of the artist, who was a Catholic in an overwhelmingly Protestant country.

The real La Peregrina remained in the possession of the Spanish royal family until the early 1800s. In 1808 Napoleon invaded the country and put his brother, Joseph Bonaparte, on the throne. When the French were ousted from Spain in 1813, Joseph brought the pearl back with him to France and gave it to his sister-in-law Hortense de Beauharnais. It was then inherited by her son Charles Louis Napoleon Bonaparte, the future Napoleon III, President and Emperor of France in the mid-1800s.

When Napoleon III needed to boost his finances, he sold it to the English James Hamilton, Duke of Abercorn. Hamilton’s wife, Louisa, reportedly suffered the same panic as Elizabeth Taylor, misplacing La Peregrina several times during society functions, including once between the cushions on a sofa in Buckingham Palace. It remained in the possession of the Dukes of Abercorn until it was purchased for $37,000 at auction by Richard Burton in 1969.

After retrieving it from the mouth of her Pekinese, it became one of Elizabeth Taylor’s prized possessions. La Peregrina was to be immortalised in visual culture once again by appearing around Taylor’s neck in various iconic photographs and films including Anne of the Thousand Days (1969). In December 2011, following Taylor’s death, it was sold at auction for $11.8m (£8.4m) to an anonymous buyer.

On average, only one oyster in 10,000 will produce a pearl of moderate worth. The chances of producing one on the scale and flawlessness of La Peregrina are incalculable. Its name means “The Wanderer” and the odyssey of this marvel of nature, from the oyster beds of the Gulf of Panama through the hands of some of the most prestigious individuals in world history, is a reminder of what pearls have meant to different people over the course of time. Pearls aren’t just an ornament; they also speak to us about imperialism, power, wealth, spiritual purity and our understanding of ultimate beauty.