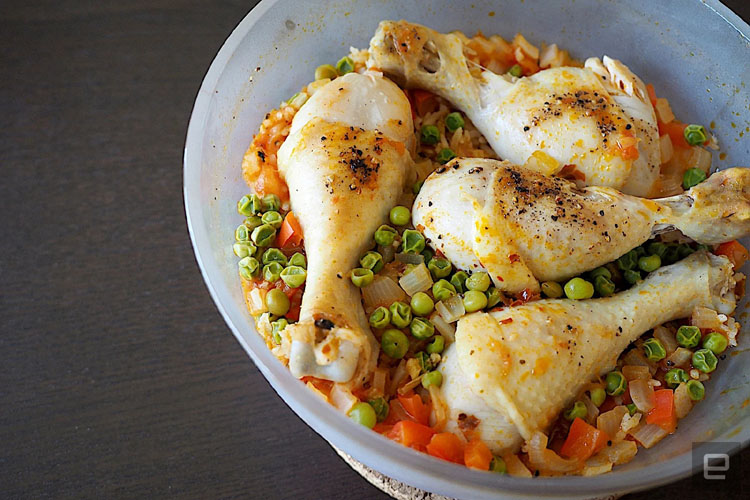 I’m a sucker for newfangled kitchen appliances. I bought into the Instant Pot hype a few years ago and tried out an air fryer as well. (I ended up getting the Breville Smart Oven Air, a toaster oven with an air-frying setting.) I also own a host of other contraptions cluttering up my kitchen cabinets: a juicer, food processor, ice cream maker and two sous vide machines.

Yet, the appliance I use the most is the humble microwave. Like many of you, I use it mainly for reheating leftovers or warming up frozen dinners. I’ve never really considered using it for actual cooking, except for the occasional “microwave mug cake” recipe I’ve seen go viral on social media. Oh, I’ve heard of cookbooks from the ‘70s and ‘80s that tried to sell the public on the wonders of microwave cooking — I’m sure my mom even bought a few back in my youth — but those have largely turned out to be full of culinary deception. (A roast beef dinner via microwave? I don’t think so.)

But a few months ago I saw an Instagram ad for a new line of cookware that was designed to be used specifically with the microwave. It’s called Anyday, and it was co-founded by renowned chef David Chang of Momofuku and Ugly Delicious fame. The ad showed luscious photos of mashed potatoes, mapo tofu, mac and cheese, and a chicken and pea dish that all looked really delicious. Could all of this really be made with just the microwave? Perhaps the best kitchen appliance was under my nose all along? Needless to say, I was intrigued.

According to Anyday, the main thing differentiating its cookware from regular microwave-safe containers is its glass lid. It has a silicone gasket that blocks splatters and keeps moisture in, as well as a knob at the top that can be pulled out for steam to escape through air vents. The knob can also be pushed down to create an airtight leakproof seal, at which point the containers are also stackable. In contrast, my existing set of Pyrex containers just have regular plastic lids, which even the manufacturer recommends shouldn’t be used in the microwave since they can warp.

I should note here that the Anyday lids do have stainless steel rims, which you might think is a little dangerous to put in the microwave. But they’re actually safe on account of their smooth, curved shape, which prevents arcing. The company does warn against heating up two dishes at once, however, as the combination of two stainless steel lids might result in sparks flying.

Also, the Anyday dishes themselves are made of a frosted borosilicate glass which can withstand large temperature fluctuations without cracking. This last part is important, as certain ceramics and glass aren’t completely microwave safe. For example, I tried heating up a potato once on a plate I bought from IKEA, and it ended up splitting in two. The plate, that is, not the potato.

Still, I was a little skeptical. So I went ahead and purchased a full set of Anyday cookware just to try everything out. That’s four dishes total — shallow and deep in medium and large sizes — which is admittedly quite expensive at $120. Alternatively, you can get the medium set of two dishes for $55 or the large set for $75. You can also opt to buy each dish separately; the two medium ones go for $30 a piece while the large options are $40 a piece. That definitely makes this pretty pricey compared to an average set of microwave-safe containers — a full 18-piece Snapware Pyrex set, for example, is just $30.

The Anyday set comes with several recipe cards, which are very handy to start out with, but the best place to find recipes is on the Anyday website. You’ll find everything from one-ingredient recipes (e.g., you just want to steam some rice) to full recipes such as black bean soup and squash curry. On each recipe page, you can select your desired serving size as well as the wattage of your specific microwave oven, which will determine variables such as dish size, cook time and what power level you should use.

I’ve used the Anyday cookware for several weeks now, and I’ve actually been mostly impressed with the results. The first recipe I tried was a chicken and rice meal with peas and marinara sauce. I was nervous about whether it would work, but it turned out to be delicious, with the chicken cooked through to the bone and the rice tender and fluffy. The Thai pineapple chicken recipe also worked out well. I think I would’ve preferred it if the onions were browned and caramelized like they would be on the stove, but for microwave cooking, it was completely satisfactory.

One dish in particular was a revelation for me: Silky Chinese steamed egg. This is a recipe that can be quite tricky to master on the stove, as you need to steam it slowly over a gentle heat. But in the microwave, it’s a matter of heating the custard solution at a lower power level for just four to five minutes, depending on your microwave wattage. (The company’s site recommends Power Level 4.) I’ve never really fiddled around with my microwave’s power settings before, but now that I see it can result in a smooth custard, I will definitely be using it more often.

Another killer application, at least for me, is poached eggs. I usually find poaching eggs to be a bit of a chore; you have to heat up a pot of water, carefully drop in the egg and hope you’re able to rescue it when it’s done just right. It’s especially challenging when it’s six in the morning and I haven’t had my coffee just yet. But with the Anyday and the microwave, all I have to do is fill up a shallow dish with cold water straight from the tap, crack an egg into it, cover it, nuke it for two minutes and it’s done. The yolk is cooked just enough so that it’s a little runny, which is how I like it. I almost couldn’t believe it.

The experience wasn’t perfect, however. For example, I tried using the Anyday to cook white rice, and even though I followed the recipe exactly, the water in the dish boiled over, pushing the lid up and spilling out into the microwave. As a result, the rice wasn’t cooked correctly, and I had to add the water back in and cook it further. I tried cooking the rice in a much larger dish later on and it worked out better, but I wish the site had suggested that instead of me finding out on my own.

Speaking of the recipes, I should note that not all microwave ovens are the same, even among those with the same wattage. My microwave, for example, is apparently more powerful than normal, and it took way less time for me to steam broccoli than the site recommended. I also found that not all microwave ovens’ power levels are the same either. My Power Level 4 could be your Power Level 3. I definitely had to play around with different variables in order to get certain foods to cook properly.

Plus, there are certain kinds of cooking that the microwave just cannot do. You’re just not going to get the same kind of browning that you can get on the stove or in the oven. You can’t use it to deep fry or roast or bake. What you’re basically doing is steaming food, albeit in a more controlled way. The microwave won’t replace your stove or your oven or your Instant Pot completely.

But, for all its flaws, I still think the Anyday cookware is great. It’s made me realize that the microwave has a lot more uses than just reheating leftovers. It’s opened up a whole new world of culinary possibilities that I had not realized existed before. Sure, the mac and cheese I made in the microwave won’t be as amazing as the one baked in the oven, but the former can be done in under 10 minutes, and it still tastes creamy and cheesy. I’ve also made instant ramen in the Anyday and the microwave to great success.

It might not make the best food you’ve ever tasted, but for college students and time-pressed parents and professionals, the microwave might just be the most versatile appliance in the kitchen. As long as you have the right cookware for it anyway.