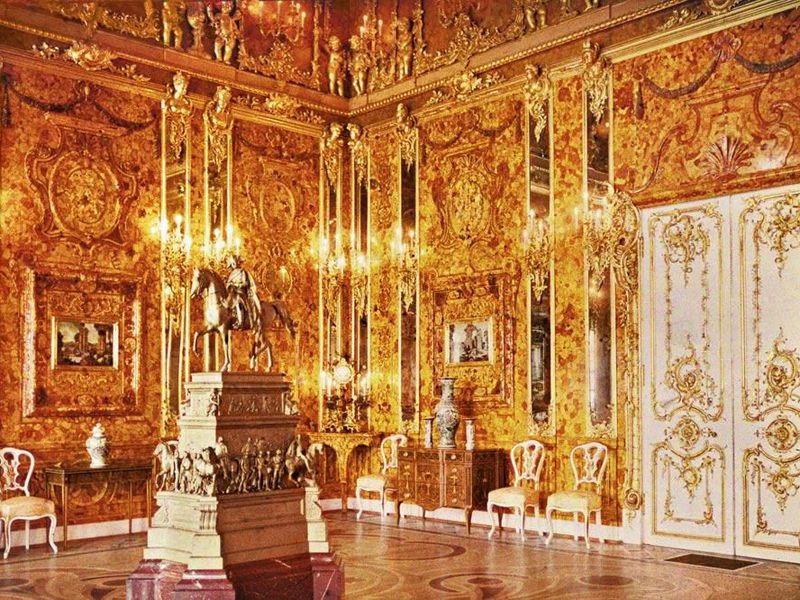 Luminous and fragile, amber has long inspired reverence. Protected by Prussian law starting in the 13th Century, the fossilised resin was a sought-after substance for crafting royal and religious objects throughout Eastern Europe. The Amber Room, a series of panels crafted from six tonnes of amber mounted on gold-leaf walls and adorned with mosaics and mirrors, was a paean to the material’s beauty and status.

Designed for royalty in Prussia and Russia, lost to war in Germany and eventually reborn in a St Petersburg palace, the room remains a mystery as captivating as amber itself.

The recreated Amber Room is on display at Catherine Palace in the Tsarskoye Selo State Museum and Heritage Site in St Petersburg (Credit: ksenija18kz/Getty Images)

The Amber Room was originally designed in the early 18th Century as an opulent 16sq m showpiece chamber for Frederick I, the King of Prussia. In 1716, the chamber was gifted to the Russian Tsar Peter the Great, and it was eventually was moved to the Catherine Palace near St Petersburg. To match the spacious rooms of the palace, Italian architect Francesco Bartolomeo Rastrelli was called upon to expand the room. Under his guidance, the original panels were incorporated into a 55sq m room decorated with more amber, candelabras, mosaics and gilded figures. The Russian Baroque marvel became known as the “eighth wonder of the world”.

When Nazis invaded Russia in 1941, they dismantled the Amber Room and moved it to Königsberg castle in what was the German state of Prussia. According to Anatoly Valuev of the Kaliningrad History and Arts Museum, Königsberg was a “transfer base for [looted] cultural objects, which would be stored in the city for the further transportation to other parts of Germany”. But when the Red Army seized the city in 1945, no traces of the Amber Room were found.

Some thought the room might have been destroyed by fire. “But no traces of burning amber were found,” said Valuev. “And it was assumed that the room survived after all, and it was hidden in the castle’s basement or it was taken somewhere else.”

The search for the fabled Amber Room continued. In 1946, Koningsberg became part of Russia and was renamed Kaliningrad. Two major investigations yielded no sign of the room. Soviet specialists continued to explore hundreds of locations around the city and in the ruins of the town’s castle. In the 2000s, teams with more advanced equipment continued the search and found artworks and jewellery in a hidden part of the castle’s basement. But still no Amber Room.

Even if the Amber Room were found, said Tatyana Suvorova of the Kaliningrad Regional Amber Museum, it would likely be a shadow of its former self. “Amber is a complex material; it is quite fragile, and it changes over time,” she said, adding that if the chamber was to be rediscovered, “This would be the greatest happiness, [but] it would be a fact of history not a work of art. Because such artworks made of a fragile material require very delicate handling – they require a museum environment.”

As hope faded that the Amber Room would be found, a new idea emerged. In 1979, the former USSR began reconstructing the room guided by two remaining original items: a single box of relics from the room; and 86 black-and-white photos of the space taken just before World War Two.

The reconstruction took 23 years, but today the recreated Amber Room is on display at Catherine Palace in the Tsarskoye Selo State Museum and Heritage Site in St Petersburg. With walls glowing orange and gold, this new Amber Room brings the ancient allure of fossilised resin to life once more.