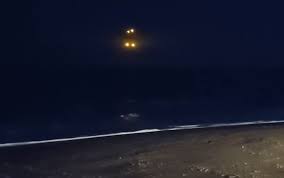 FLORIDA (Sputnik): Sightings of UFOs jumped by about 1,000 in the United States last year, with more and more people reporting mysterious objects in the sky. The National UFO Reporting Centre (NUFORC) said there were 7,200 sightings in the US last year.

Two glowing objects have been spotted moving across the skies over Palm Coast, Florida. William Fuentes, who captured the incident, described the objects as two orbs of light flying at a high speed. He said the “UFOs” flew in the sky for some time and disappeared shortly after he began filming them.

​The development comes several days after former Pentagon official Luis Elizondo claimed the US government doesn’t want the public to know about UFOs. Elizondo, who headed the Advanced Aerospace Threat Identification Programme often referred to as the Pentagon’s research unit into UFOs, told the New York Post he had interviewed US servicemen who encountered UFOs on an almost daily basis.

In one instance, an eyewitness reportedly told Elizondo how fighter jets had a “near collision” with a cryptic “sphere encasing cube”. The former Pentagon official claims to have analysed data from radars that allegedly revealed the mysterious object moved at extreme speeds of 14 miles per second.

Elizondo claims that when he tried to share the information with then-Secretary of Defence James Mattis “very senior officials” blocked him. Elizondo resigned in response.

He described UFOs as a national security risk and claims the Pentagon has been covering up the existence of them due to religious objections and fears of inciting public panic.

The former Pentagon official made the statements ahead of the release of a much-anticipated report by the Department of Defence in which it will brief Congress on all the information it has about UFOs.