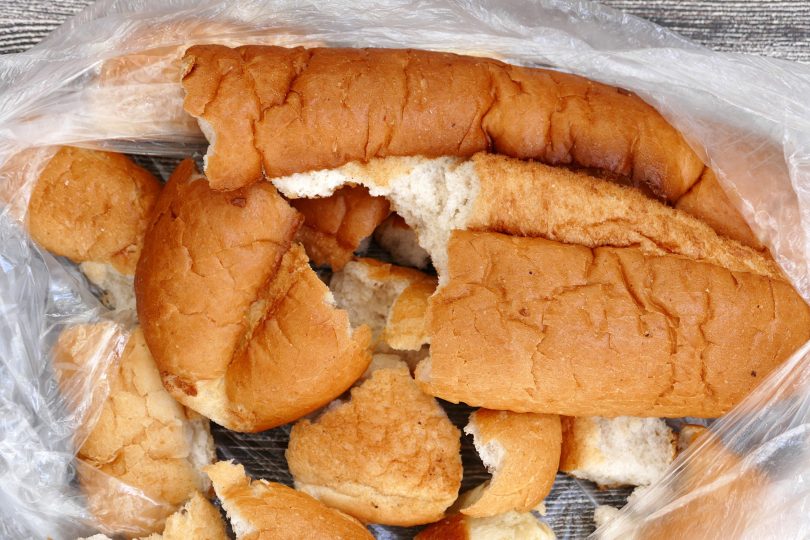 In every house, there always seems to be leftover bread going stale in a corner of the kitchen. The good news is, there are ways to avoid throwing it into the garbage. Here are some tips for you

You plan meticulously and buy only as much bread as you think you need, but then there are some leftovers. A day later and it still tastes good, but people usually just grab a new loaf and thus goes the cycle of leftover bread. Especially in Turkey, I see whole loaves tossed out – granted cattle owners come and collect them, but that is not necessarily always the case. So here are some ways to use those leftovers!

How to store them

Let’s say after breakfast half of the loaf remains. One’s first instinct is to put the bread in the fridge, but this cool place will dry the bread out faster. So avoid the fridge as long as it is not too hot (like the summers in Turkey). Closing them off with a plastic bag is of course a given in that case. But let’s say it has been more than a day and the bread is getting really tough. What then?

Panko flour, “galeta unu” or whatever you like to call them. Simply cut your bread into tiny pieces and leave them to hang out in a cloth tote bag. With time they will dry out almost completely. The next time you bake something and have removed your baked good and turned off the oven, toss the bread pieces in there to get the very last bit of the moisture out of them. Once they are hard as stone, use the kitchen appliance of your liking to make the stone-like bread really fine, and voilà, you’ve got yourself some breadcrumbs for crunchy delicacies without spending a dime. I was baffled when I saw that you could actually buy breadcrumbs in stores (I was a little kid after all). I was so used to making them at home!

The big brother of bread crumbs and perfect for serving in a wide variety of soups and salads. Just cut the bread into cubes and toss them into the oven. Once dried out you can store them in the freezer. The cool thing is that when they are fresh out of the freezer they seem to stay crunchy a tad bit longer when tossed into a soup. But don’t stop there. I like to toss my croutons in a bit of oil and water that I have saturated with a wide variety of seasonings! From thyme to garlic powder, whatever you like. Just bake it in the oven again and store them for the long run in the freezer. But if you are going to consume them in the near future, an airtight container will do the trick as well. By the way, the shape does not matter, you can make sticks or even as slices. The cubes are just easier and faster to dry out. I love these as a snack as well.

Now, this is truly nostalgic to me. Sometimes we’d even buy bread a couple of days beforehand just to make this. Just cut your bread to equally thick slices and prepare a tomato sauce of your liking, and spread a bit of that onto each slice. Then go ham on whatever topping you like! The smaller surface can make it tricky to put a lot on them, but my favorites are tuna, corn and mushrooms. But like with each pizza, the choice is absolutely up to you! Add a slice of cheese on top, or grated for that matter, and bake this in the oven until the cheese has just melted enough. Take out and enjoy!

Again, one of those recipes that don’t even need much of an explanation. Cut the bread into thin-ish slices and whisk some eggs with a dash of milk. Season that with a bit of salt and black pepper and softly press those slices into the eggy mixture before frying them in a pan with a bit of oil. My mother loves to make these, but I’m more into “minimal eggs and maximum oil” close to the end of the egg mixture getting all used up. Of course, you can make these a bit differently by directly putting the bread into the eggs and frying them all together, but the bread will soak up quite a bit. So keep that in mind if you want a soft bread texture. I’m a sucker for the crunchiness!

Now this one I didn’t learn until recently but it has joined the ranks of my go-to recipes for sure! The combination of a simple pudding with bread makes for an interesting mix that you need to try as soon as possible.

Cut the loaf of bread into small pieces, I usually just do cubes to make it easier to fit into a baking tin but thin slices can even work here. Oil your baking tin of choice lightly and in a separate bowl toss in all the ingredients, but don’t forget to melt your butter. If you don’t want to bother with that you can use vegetable oil as well. Whisk that all together. Toss the bread into this mixture, give it a quick stir and everything can go into the oven. Bake this at 175 degrees Celsius (350 degrees Fahrenheit) until it is golden brown. This can take about 15-20 minutes, but depending on how deep your dish is this might take a bit longer. Once out of the oven top it off with powdered sugar and serve.

Don’t be scared to experiment with this! Adding a teaspoon of cinnamon and some apple cubes make this a very interesting mixture. Though you have to keep in mind that baked apples get soft and release moisture so you might want to reduce the amount of milk. And of course, you can make a chocolate version of this! Add a tablespoon or two of cacao to this and maybe even a handful of chocolate chips and bake them together. Your imagination is your limit!

This is the extreme version of the pizza bread and definitely not light in any way. But when you want to have a centerpiece for a buffet to go along with lighter stuff, this is the go-to-recipe.

Cut the loaf of bread into slices without cutting all the way through, leaving space to stuff the in-betweens. Place this loaf onto a big piece of aluminum foil and melt your butter. Add the spices to the butter including the finely chopped garlic and add the olive oil as well. If you don’t like the idea of garlic chunks in the bread you can opt for garlic powder as well but as the garlic will be baked the taste won’t be as strong. Brush the butter-spice mix onto each slice and if any is left over, spread some over the loaf as well. Now you stuff the slices with any and all kinds of cheese you like. I personally do a mix of cheddar, kasseri (kaşar in Turkish) and a crumbly very salty cheese called “Kuymak Peyniri.” An alternative to that could be parmesan. Once full, wrap the foil around the bread and bake it in the oven for about 20 minutes. If you like you can open the foil after that and bake it for another 5-10 minutes to make it more crunchy but that is entirely up to you.

Yes, you can make tiramisu with bread. After all, what are ladyfingers but sweet hard-baked bread? The first time I tried this out I couldn’t believe that it was virtually the same taste!

Brew the coffee and let it cool down. Mix a bit of the milk we’ll need with all the ingredients but the bread to avoid clumps when making the cream. Get the rest of the milk to a boil and add this mixture into it and stir constantly to avoid it sticking and burning at the bottom. When it starts boiling it will thicken a bit, so let it bubble for a minute and then turn the heat off. Add the cream cheese and stir until it is completely incorporated.

Get a tray or tin of your choice, dunk cut bread/toast pieces very quickly in coffee and place them on the tray. Don’t forget that bread is already soft so we don’t need as much coffee as with ladyfingers. Cover the whole surface of the tin and add a layer of the cream to cover the bread. Add another layer of dipped bread/toast and cover with the creme again. Let it cool off and put it in the fridge. Let rest for at least 8 hours, but resting it overnight would be better.

Serve with cacao dusted on top.

Don’t dust your tiramisu with cacao if you don’t intend to serve it directly. The surface of the tiramisu is wet and nobody wants a wet cacao coat. Or maybe you do. But usually, it won’t look great.