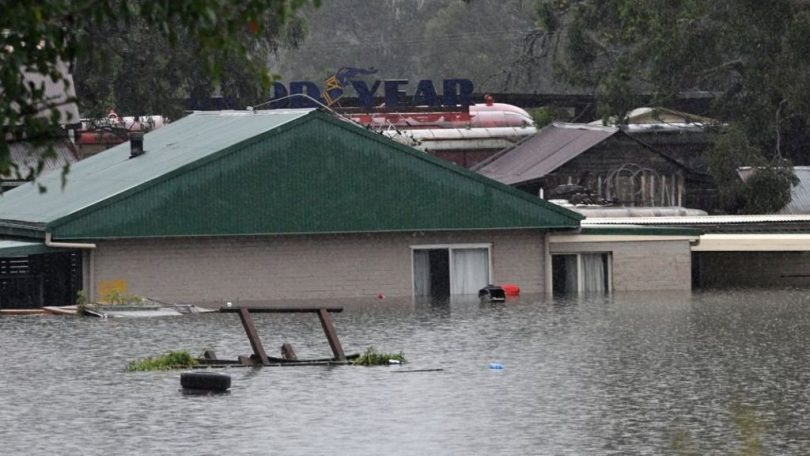 Mr Morrison warned of more rain and days of danger to come as the emergency became not “just a coastal event”.

He said Sydney’s largest dam would overflow for at least another week, threatening highly populated areas.

Warragamba Dam discharged 500 gigalitres on Sydney – equivalent to the volume of Sydney Harbour.

“We advise that the rain and flood situation does remain dynamic and extremely complex,” Mr Morrison said on Tuesday.

No deaths had been reported but thousands of people have been evacuated and troops deployed after days of torrential downpours across the country.

The prime minister said the rain was expected to ease on Wednesday but the flood threat would remain.

Some 18,000 people have been evacuated so far in NSW, including a 37-year-old woman in labour who was airlifted after being trapped by the flooding west of Sydney.

Another 15,000 were on evacuation notice on Tuesday.

What is the latest forecast?

Australia’s Bureau of Meteorology (Bom) has warned the situation is “far from over” as two major weather systems collide.

A BoM tweet said an area as large as Alaska – stretching from NSW to the Northern Territory – was now being affected by weather warnings.

Mr Morrison said “full impact assessments” were still to be made in Sydney.

In all, 10 million people are under warnings in every state and territory except Western Australia.

The bureau has forecast “increased rainfall, strong winds, damaging surf and abnormally high tides” in the state on Tuesday.

The BoM’s flood manager, Justin Field, said it was “probably the worst flooding that I’ve experienced” in 20 years of forecasting.

The military is being deployed to help with search and rescue.

But the bureau did predict some respite, tweeting: “Most areas of New South Wales will see a clearing trend early Wednesday as a drier airmass moves into the region.”

What has been the damage so far?

“Several hundred homes have been flooded, roads damaged, wildlife lost [and] telecommunications and power outages across the flooded areas have been reported,” Mr Morrison said.

Emergency crews had conducted at least 700 rescues and 9,000 insurance claims had been lodged already, he added. More than 2,500 people had applied for financial assistance.

People in many areas have been ordered to evacuate and others have been given evacuation warnings.

An order requires people to seek shelter with family or friends well away from flood impacted areas, or in a special centre. The warning tells people to prepare for an evacuation order.

Areas around the Colo and Hawkesbury rivers are of particular concern. They are seeing the worst flooding since 1961.

Among the incidents that have happened:

It’s been an anxious few days for the Wassens and hundreds of other families in the area, especially now as they wait in limbo.

“But we’re ready to evacuate. We’ve packed up ready to go. If we get the order then we will leave to save ourselves,” Ms Wassens says.

From fires to floods

The intense summer of rain and floods in eastern Australia is a stark contrast to a year ago, when many of the same areas were scorched by mammoth bushfires and ravaged by drought.

This side of the continent is currently experiencing a La Niña weather pattern, which typically brings more rainfall and tropical cyclones during summer.

Two of Australia’s three wettest years on record have been during La Niña events. Typically a La Niña sees a 20% increase in average rainfall from December to March in eastern Australia.