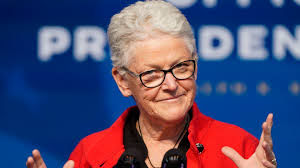 Why it matters: A White House summary claims they’re seeking common ground with the sector.

“She made clear that the Administration is not fighting the oil and gas sector, but fighting to create union jobs, deploy emission reduction technologies, strengthen American manufacturing, and fuel the American economy,” the White House said.

Per its piece and the Wall Street Journal, the execs also backed carbon pricing, though my usual reminder that the political pulse for taxes or trading is very faint.

The details: The meeting, per sources and published reports, included CEOs or other top officials from oil majors like Chevron, Exxon and BP, as well as trade groups and large independent producers like Occidental and Devon.

The intrigue: The meeting comes ahead of Interior’s virtual public meeting Thursday on the department’s approach to oil-and-gas leasing on public lands.

But some green activists and progressive Democrats want to see even more aggressive steps to curb fossil fuel extraction.

What they’re saying: The American Exploration & Production Council, which represents large independents, said after Monday’s meeting that they want to work with the administration to ensure U.S. production meets global demand.

They back U.S. production at the “highest standards” and want to ensure climate policies “do not shift production and emissions overseas.”