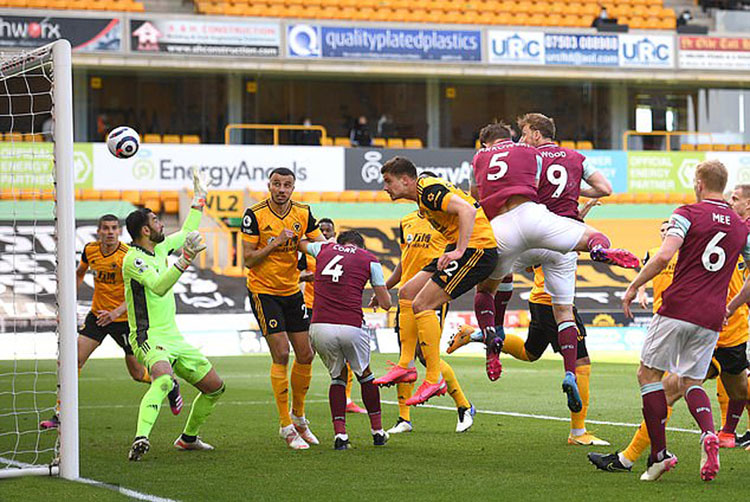 An awful display from the hosts was ruthlessly exposed by the Clarets, who produced an excellent performance to end a run of three straight defeats in style. Sean Dyche’s side are now nine points clear of Fulham and the relegation zone with 15 to play for and the long-serving manager can surely start planning for a sixth consecutive season in the top flight.

Wood was superb throughout but was also gifted his chances by a Wolves display that was worryingly half-hearted and reeked of the end of a season marooned in mid-table. Strike partner Matej Vydra saw his effort ruled out by the video assistant referee for offside but there was still time for a fourth as Ashley Westwood thumped in from the edge of the area.

Dyche was at pains in the build-up to this match to once again point out the lack of money he has had to reinforce his squad – and that staying in the Premier League for another season would be no mean feat.

He looks set to achieve that goal after his settled group delivered one of their most accomplished away performances in recent years. From the first minute, the Clarets were far more aggressive than Wolves, pushing the hosts back, and it was not long before Wood had them ahead.

Centre-back Willy Boly had already got away with one error when he inexcusably allowed a straight ball over his head, Wood twisted England defender Conor Coady inside out and arrowed a low shot across goal and in. Six minutes later Wolves winger Adama Traore played a sloppy pass on the edge of his own area, Dwight McNeil anticipated the error and ran through to square the ball and give Wood a tap-in in the middle.

Another excellent cross from the left was volleyed over by Vydra as Burnley piled on the pressure, and the third goal did come before the break when Wood was left free to powerfully head in McNeil’s inswinging corner.

The Clarets have dropped 13 points from winning positions in the Premier League this season but that never looked likely and Vydra – who rounded Rui Patricio expertly to score but was just offside – and Matt Lowton were close to extending the lead before Westwood rounded things off.

Wood was provider this time, teeing up the former Aston Villa midfielder to hammer in from 20 yards.

“I’ve been sleeping all right,”said Dyche. “I don’t tend to worry too much. It’s a season’s work. “It’s how you end up in the season and our focus has to be the next game. We go into the next one and work really hard to try and get more points on the board.”