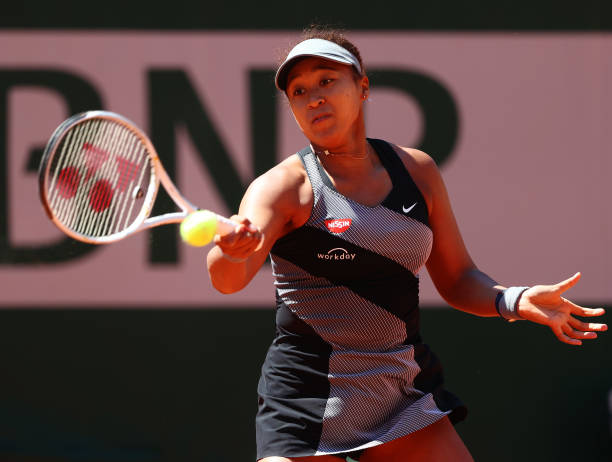 PARIS (Agencies): World number two Naomi Osaka let her racquet do the talking at the French Open on Sunday, maintaining her media boycott but briefly telling a TV interviewer that her clay court game is “a work in progress”.

Osaka opened the first day of action at Roland Garros with a 6-4, 7-6 (7/4) victory over Romanian world number 63 Patricia Maria Tig.

The 23-year-old Japanese star, a four-time Grand Slam title winner, has refused to carry out media obligations at the tournament, claiming news conferences are detrimental to her mental health.

She believes traditional post-match inquests are akin to “kicking people when they’re down”.

On Sunday, Osaka only agreed to take part in a cursory on-court television interview but still faces a fine of up to $20,000 for skipping mandatory news conferences.

“For me, playing on clay is a work in progress,” said the reigning US and Australian Open champion on a sun-kissed Court Philippe Chatrier.

“Hopefully the more I play, the better I will become. It’s a beautiful court. I’ve only played two matches here, one before the roof and one now so hopefully I’ll keep it going.”

And that was that.

Osaka, who has never got past the third round in Paris, fired 39 winners but committed 35 unforced errors against Tig to set up a second round duel against another Romanian player, Ana Bogdan.

The win was a 14th successive win for the world number 139 Kalinina across all tournaments.

The 22-year-old took Djokovic to five sets in the 2020 semi-finals.

He has already captured the Monte Carlo Masters and Lyon titles on clay this season.