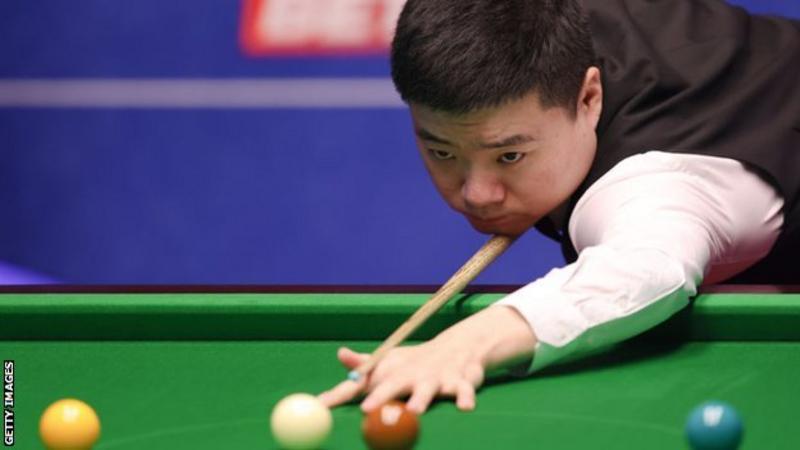 Sheffield (Agencies): A fluke on the final black of the session helped Ding Junhui edge 5-4 ahead against Stuart Bingham in a fascinating start to their first-round World Championship match in Sheffield.

A high-quality game saw Bingham score two centuries to build a 3-1 lead. Ding, the 2016 runner-up, hit breaks of 105, 86 and 88 to level at 4-4 and took the ninth when the black rattled from one corner pocket to the other side.

Sixth seed Kyren Wilson trailed Gary Wilson 5-1 but fought back to 5-4. Qualifier Gary Wilson made the most of some uncharacteristic errors by his opponent as four scores of more than 50 helped him win five consecutive frames after losing the opener.

But a break of 82 settled the 2020 runner-up and back-to-back centuries ensured he cut the gap to just one. Kettering’s Kyren Wilson, 29, was second best against the 2019 semi-finalist for much of the session, but rallied superbly and finished with a magnificent clearance of 139, the highest break at the Crucible so far this year.

Fans keep their distance at Crucible An entertaining session was seen by just 83 fans, the lowest attendance in the seven sessions of World Championship action so far this year. An easing of lockdown restrictions mean the 980-seat venue could be up to a third full for first-round matches.

Sunday saw 389 tickets sold over three sessions, while the opening day saw the best attendance figures so far, with Ronnie O’Sullivan’s presence no doubt helping sell 632 tickets in total. A spokesman for World Snooker Tour said: “It has been fantastic to be the first government pilot event and to welcome back limited crowds, and the numbers later in the event are much bigger, with some sessions over the coming weekend and final close to sell-out.

“We realise that the conditions are different to previous years for fans, particularly the fact that there are more restrictions on hotels and restaurants. “We can assure all fans that all measures are taken to keep safety as a priority. We encourage them to read the information on our website and consider taking the opportunity to be part of this event which is usually sold out a year in advance.”

Fans have been back watching live snooker for the first time since the delayed 2020 World Championship finished on 16 August. The capacity can increase to 50% for the second round and 75% for the quarter-finals and semi-finals, with the aim to have a full house for the final.

The battle of the Wilsons plays to a finish in the evening session, as does Anthony McGill’s delicately balanced match against Ricky Walden.

Walden, who made the last four in 2013, recorded back-to-back century breaks as he fought back to lead 3-2 but McGill regained his composure, compiling his first century of the match and an 88 to edge ahead.