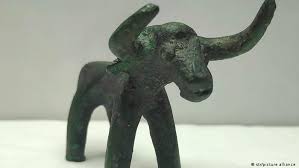 The idol was a rare find for archaeologists visiting a site that inspired the modern Olympic Games. It was likely an offering to Zeus, king of the ancient Greek gods.

A 3,000-year-old bronze bull idol was uncovered in Olympia, Greece, due to heavy rainfall. The Greek culture ministry said it was a “chance discovery.”

The small bronze idol was found in a sacred enclosure near the temple of Zeus and Atli, as “one of its horns was poking out of the ground following recent heavy rainfall,” the ministry said.

After rains had swept away parts of the ground in a sprawling ancient site that inspired the modern Olympic games, an archaeologist saw the figure sticking out of the mud.

The little idol was cleaned and stored after its discovery, the culture ministry said.

The bull has been dated to the geometric era between 1050-700 BCE, according to preliminary evaluation.

It was likely part of thousands of votive offerings to the leading ancient Greek deity, Zeus, burn marks on the statuette suggest. People in ancient Greece often brought small statues to the temple as offerings.

The bull was one of the principle symbols associated with the king on the Mount Olympus, along with a thunderbolt, an eagle, and an oak tree.