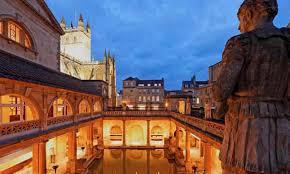 Between the 17th and 19th centuries, the grand tour was a rite of passage in which young gentlemen of sufficient means and rank travelled across western Europe – sometimes for years – to experience first-hand the art, architecture and monuments of the classical world and the Renaissance, then considered to be the pinnacles of culture.

Over the past 12 months, the lack of overseas travel has led many of us to re-engage with – and for some, perhaps, to truly appreciate for the first time – the wealth and variety of culture and historic sites on these shores. With this in mind, what might a grand tour of Britain look like in 2021?

Eschewing the class and gender prejudices of the past, I present an itinerary for a post-lockdown excursion, from 5,000-year-old neolithic monuments to street art in Aberdeen. As well as spanning history, I want the tour to reflect the diversity of British culture and cover the length of the island without missing out anything glaringly obvious like Shakespeare. Or the Eden Project. Or Bath. Or the V&A …

Opening times may vary according to local restrictions: check before visit.

For those who view contemporary art as unpalatable and unloved, Tate Modern defiantly proves otherwise. Attracting more than 6 million visitors in 2019, this is London’s second most popular attraction (after the British Museum) and the world’s most-visited modern art gallery. Tate Modern challenges the way we think about and experience art: its dazzling – and sometimes challenging – array of installations, immersive performances and digital art continue to erode the idea of a gallery as simply a place where we look at pictures on walls.

In 2016, the addition of Switch House added yet more space for the largest national collection of British art from 1900 to the present day, together with a sizable collection of international works from the likes of Picasso, Rothko and Joseph Beuys. Originally Bankside Power Station, the building was designed by Sir Gilbert Scott – best known for the Midland Grand Hotel at St Pancras station, the Albert Memorial and the red telephone box. As a gallery and as a building, Tate Modern stands as a powerful totem for Britain’s shifting status, from powerhouse of industry to one of art and culture since opening in May 2000.

The original Globe Theatre was one of the country’s first purpose-built playhouses and the one most closely associated with William Shakespeare. Opened in 1599, the three-storey amphitheatre had a short and tumultuous life. Lost to a fire in 1613, it was rebuilt, only to be pulled down 30 years later after the English civil war – having offended the ruling Puritans with its plays’ “lascivious mirth and levity” – and replaced with tenements.

Shakespeare’s Globe, opened in 1997 next door to Tate Modern on the South Bank of the Thames, is the theatre’s third incarnation, lovingly reconstructed in green oak and lime-plaster and boasting the only thatched roof in central London.

While it houses the country’s largest exhibition devoted to the Bard, no visit here would be complete without joining other “groundlings” in the theatre’s 600-capacity open “yard” – brolly at the ready – to see a play, an experience likened by actors and audiences to being at a festival. This is the closest you can get to seeing Shakespeare as the Elizabethans would have – without the period’s accompanying odours.
Exhibition and tour from £17, £10 under-16s, £46 family. Plays staged May-October, prices vary, shakespearesglobe.com

On an unremarkable street in the north-west of the capital stands a building so extraordinary it has been called “one of the seven wonders of London”. Europe’s largest Hindu temple opened in 1995 as a place of worship, an outreach charity and exhibition space for its million-plus annual visitors. Its stunning marble and limestone mandir, or temple – the main building used for worship – was constructed of 26,300 intricately carved blocks that interlock like jigsaw pieces. Inside lie a forest of sculpted columns, statues of deities and wood carvings.

The UK’s transition into the third millennium was marked by the opening of the biggest greenhouse on the planet. With its two colossal geodesic domes housing Mediterranean flora and the world’s largest undercover rainforest, the Eden Project is a mind-boggling feat of architecture and biological engineering. It is home to 2 million plants and may well become the last refuge of many. Eden represents a milestone in our shifting attitudes towards environmentalism, sustainability and the health of the planet.

“We want Eden to be the best classroom on Earth,” says co-founder Tim Smit. It may also be the template for how we cultivate food in inhospitable environments in the future.
Adult £28.50, child £15, family £75, edenproject.com

With the words “You’re on your own now”, Emperor Honorius’ farewell letter to Britain in AD410 marked the end of four centuries of Roman rule. But what a legacy remains. The Romans transformed our cuisine, laws, roads and town planning, and introduced us to Latin and Christianity.

Their spa complex at Bath offers an insight not only into their sophisticated architecture and engineering, but also into their social lives, reminding us how much we still have in common. Roman baths were, after all, the leisure centres, luxury spas and gyms of their day – places where people congregated to socialise, gossip, flirt and be pampered.
From £18.50 adult, £11 child, £34.50 family, romanbaths.co.uk

Stonehenge may be Britain’s most famous neolithic monument but Avebury, 23 miles away, offers a deeper, more rewarding connection to our pre-Roman ancestors. At 330 metres in diameter it is also the world’s largest stone circle, large enough to contain a village and a pub. Unlike Stonehenge, which has been roped off since the 1970s, Avebury can be visited without restriction and people can, if they so wish, perform rituals and acts of worship here.

Within two miles of Avebury lie West Kennet, one of Europe’s best-preserved burial chambers, and the lesser-known Windmill Hill, one of the biggest neolithic enclosures yet discovered. In the centre of it all stands Silbury Hill, Europe’s largest neolithic mound and once a shining, chalk-covered beacon.

Nothing in our history comes close to evoking such enchantment, wonder and myth as these millennia-old monuments. However we might define British culture now, it’s worth remembering that this island was founded by nature-worshipping proto-hippies.

If Britain’s entire canal network is one of the lasting engineering legacies of the Industrial Revolution, the Pontcysyllte aqueduct on the Llangollen canal is perhaps its most awe-inspiring achievement. Designed by Thomas Telford and completed in 1805, this cast-iron structure is 307 metres long and can hold 1.5 million litres of water.

Standing 38 metres above the River Dee, it is the longest aqueduct in Britain and the highest canal aqueduct in the world. To fully appreciate it, cross by foot or narrowboat. With just a metal railing on the one side, however, this section of our grand tour is not for the faint-hearted.

The first, the biggest, the glitziest and the most enduring of Victorian seaside retreats, this unashamedly tacky fantasia is at its most dazzling in the latter part of the year, when it’s illuminated by more than a million bulbs and hundreds of locally made scenic designs.

Established as a major centre of tourism when the railway arrived in the 1840s, this seafront was immortalised in George Formby’s innuendo-laced 1937 song, With My Little Stick of Blackpool Rock.

It is home to some impressive feats of engineering and/or bold design, including three piers; a circus ring which can be lowered into a 190,000-litre pool of water for a show’s fountain-dancing finale; the world’s largest disco ball; a giant Comedy Carpet of catchphrases; and the UK’s highest rollercoaster, the Big One.

At the heart of it all stands Blackpool Tower: inspired by the Eiffel Tower and a symbol of the north, it houses the world-famous ballroom, beloved of contestants in Strictly Come Dancing. Unlike most Victorian seaside towns, Blackpool continues to thrive on a 150-year tradition of bawdy seaside fun, intoxication and abandonment, while defying gentrification.

Wrapped around the top of Aberdeen’s curved market building, the message “Do not hide, because you are that light” accompanies a giant mural of a young girl, her long flowing curls ending in unicorns. Elsewhere, the city’s walls and doorways explode with colour, abstract images, political messages, pop art and surreal landscapes. Over the past 10 years Aberdeen has established itself as a cultural centre, not just for what we might think of as street art or graffiti but, simply, art on the street.

Annual festivals Look Again and Nuart have invited international artists to showcase their work through murals, ceramics and even spoof adverts, while the Painted Doors project has been commissioning local artists to adorn the city’s doorways since 2016. All of this has upped the ante for Aberdeen’s myriad street artists, resulting in a vibrant living gallery and the uncensored self-expression of its residents.

Dedicated to design – a subject close to the heart of any grand tourist – the first V&A outside London houses exhibits spanning 500 years and ranging from the work of Charles Rennie Mackintosh to DC Thomson’s comic creation, the Beano.

Looking like two great inverted pyramids conjoined on the city’s waterfront – or, from different angles, an ocean liner and the granite cliff faces of the Scottish coast – this building exemplifies Le Corbusier’s maxim: “Good design is intelligence made visible.” Inside it is sleek, spacious and light, with a vast foyer like a giant hearth – the design genius of Japanese architect Kengo Kuma. Now in the process of decolonising Scotland’s design history, and with recent exhibitions themed around Mary Quant, video games and the meeting points between human and machine design, this is a contemporary museum sailing into the future, with an eye on the past.

Modern art and tradition grew to become opposing forces in the 20th century, but nowhere is their brief truce more dazzling than in Coventry Cathedral. Designed by brutalist architect Basil Spence and opened in 1962, it was destined for controversy. Some of its detractors deemed it too traditional – the last gasp of gothic – while for others it was simply an eyesore. It proved instead to be a daring alliance of the nation’s faith with the secular avant garde; of the Arts and Crafts movement with modernism; and of new techniques in civil engineering – pre-stressed concrete – with the orthodox.

It houses work by some of Britain’s greatest mid-century artists, including Graham Sutherland’s giant tapestry above the altar, featuring a Buddha-like Jesus and four evangelists in animal form.

The building’s stunning centrepiece is John Piper’s mosaic stained-glass window, a brilliant, radiant sun exploding into greens, reds and blues. Near the end of the 20th century this “eyesore” was, in an English Heritage and Channel 4 poll, voted overwhelmingly to be the nation’s favourite building.

Our final location would have been very familiar to the original grand tourists. Oxford’s most grandiose college exemplifies the Renaissance architecture of romanesque, gothic and Palladian in its library, quads, dining hall and Sir Christopher Wren-designed Tom Tower. Uniquely, the college chapel is also the city’s cathedral. This and the symbolically inward-facing buildings of its quads are a reminder that, originally, the university’s educational focus was theological.

While it served as the seat of parliament in the 1640s during the English civil war, Christ Church has remained a place of learning for over 500 years. Nowadays, however, it can be read through the lens of our meta-modern age. Some may choose to view Christ Church as a pinnacle of education and tradition, others as part of an outdated establishment that thrives on privilege and elitism. Those of a romantic disposition might enjoy the college and its grounds as an enchanting backdrop to the proto-psychedelia of Lewis Carroll’s Alice’s Adventures in Wonderland. Recently, visitors appear most eager to see a certain dining hall and staircase in the far corner of Tom Quad. It seems fitting that our contemporary grand tour should end with a building now best known for its part in the Harry Potter films.