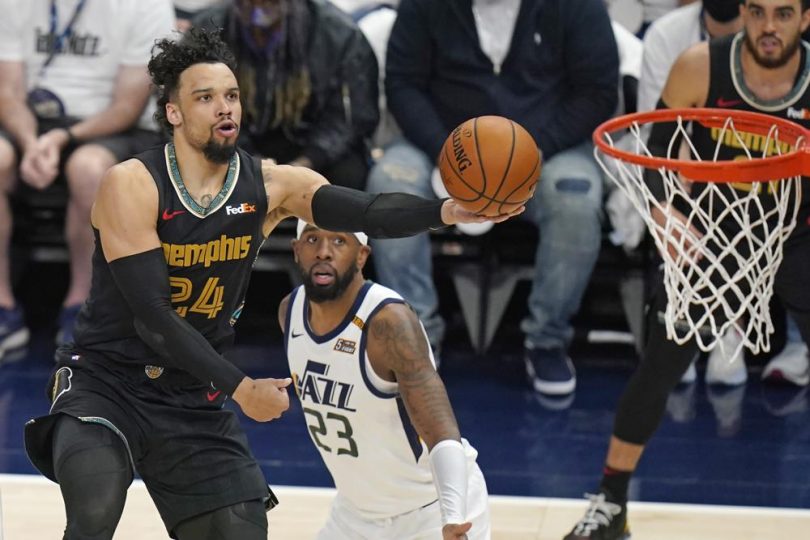 Dillon Brooks and Ja Morant combined for 57 points as the eighth-seeded Grizzlies shocked the top-seeded Jazz 112-109 in Salt Lake City. Devin Booker hit 34 points on his play-off debut as the Phoenix Suns beat the Lakers 99-90.

It was the first post-season game since 2010 for the second-seeded Suns. They achieved the win despite the experienced Chris Paul being hampered by a shoulder injury, with Deandre Ayton adding 21 points and 16 rebounds, while Mikal Bridges and Cameron Johnson added 10 points apiece.

A physical encounter saw the Suns’ Cameron Payne ejected in the fourth quarter after a shoving match which saw players and backroom staff stream on to the court as tempers flared. The Lakers, meanwhile, struggled to hit their stride throughout, with LeBron James finishing with 18 points and Anthony Davis with 13.

But the Grizzlies, who beat the Golden State Warriors in overtime in the play-in tournament to reach the play-offs for the first time in four seasons, maintained their momentum against the Jazz.

Brooks top-scored for his team on 31 points with Morant adding 26. “They had a couple of guys that couldn’t guard me,” said Brooks. Guard Mike Conley finished with 22 points and 11 assists, and forward Bojan Bogdanovic scored 29 points for the Jazz, who were missing all-star Donovan Mitchell for the 17th straight game.

In the Eastern Conference, the top-seeded Philadelphia 76ers defeated the Washington Wizards 125-118 in game one of their series, with Tobias Harris scoring 37 points. And Trae Young scored with 0.9 seconds left to give the visiting Atlanta Hawks a 107-105 success over the New York Knicks at Madison Square Garden.

“It’s fun. In the Mecca, New York City, Times Square,” said Young. “It is about letting the game come to me and reading the game as it goes.”