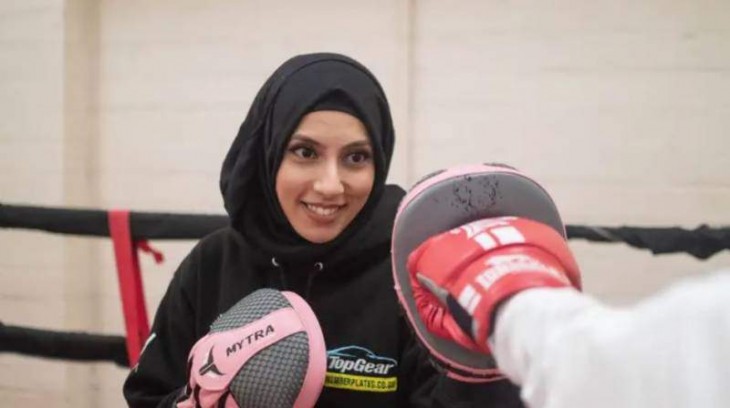 Haseeba has grabbed the title of “Hometown Hero” for the Commonwealth Games to be held next year in Birmingham. Now a days, she is serving as coach at at Windmill Boxing Gym in Smethwick. “I’ have a passion for boxing and started it at a very young age,” said Haseeba while talking to a tv. “I started it when I was a school and it was just an hour activity,” she said.

The coach said that she the things are changing now as earlier a lot of families used to deny sports for the girls. Haseeba who originally belongs to Gujrat is now living and settled in England.

“I have full support of my family unlike many others,” she said, thanking her parents for standing by her during her journey as a boxer to boxing coach. Talking about Hijat she is seen all time wearing even during her sports activities, Haseeba said that wearing Hijab was not allowed by the boxing associations but she wore it for being Muslim.

She also stated that she could not wear boxing kit either because of her religious background. She said: “Thank God, the rules about the boxing dress code were changed by International Boxing Association (AIBA), in 2019,” said Haseeba, adding that now they could wear full sleeves and cover legs and even wear the hijab, if necessary. That’s an amazing change for women,”. She said she decided to coach other women and keep on pushing the authorities for changes in uniform.

Birmingham Commonwealth Games recognized her contribution along with those of other community leaders. She played a huge role in making the sport more inclusive. She helped change official dress code rules to allow women to wear a headscarf and full-length clothing when training or competing so all the other girls can enjoy the sport more than she did.