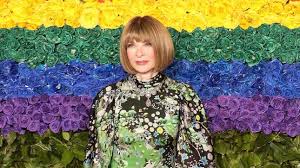 As a fashion-obsessed teenager, I dreamed of working for Vogue. What girl didn’t? This was in the 2000s, and smartphones weren’t everywhere yet, so we’d leaf through the latest copy hungrily at the back of the class. I loved the pictures, the clothes, even the adverts. But most of all I loved the masthead and the index. Who were these glamorous humans with lovely-sounding names and exotic job titles?

Mostly, of course, they were women. That’s the thing about a place like Vogue. It’s a huge global corporation with a lot of soft power, yet unlike most such companies, it has always had women at the top. But not right at the top.

Women have historically made up the majority of the front-facing workforce at Vogue. They are the editors we see sitting on the front row at Fashion Week, yet they seldom get a seat in the boardroom. The immortal Anna Wintour has risen to the C-Suite, appointed global editorial director and chief content officer in 2020, but this is a rare occurrence.

A lot of the stories about working at the magazine are not surprising, and will no doubt be received by women everywhere with a frustrated sigh. They may be surprised to hear, though, that Condé Nast (the man, not yet the company) was a huge supporter of women working, and in the 1910s and 1920s made his editor-in-chief, Edna Woolman Chase, a director of both American and British Vogues. It was in the 1960s, under its current owners, the Newhouse family, that the situation began to noticeably deteriorate.

In a reshuffling of power, the art director, Alexander Liberman, was apparently offered the editorship of American Vogue. To this he replied: “I am a man. I have no intention of becoming that involved with fashion.” So instead they created the title of editorial director, which he took with gusto. It meant a woman got to be editor-in-chief but he controlled her.

During the 1980s, editor-in-chief Grace Mirabella was going bananas under this unusual arrangement. For one, Liberman was a fan of Penthouse and Playboy, and kept trying to insert overly sexual content into Vogue, much to Mirabella’s disgust. She also had no agency to choose her own staff, since Liberman decided who was hired or fired. This meant she could lose an invaluable ally at the drop of a hat, or be forced to work with someone who didn’t fit on her team.

Mirabella had been in fashion for three decades at this point, and had increased circulation from 400,000 to 1.3m. She knew her audience, and probably deserved to have been consulted on matters pertaining to the magazine she edited. And Liberman was a hypocrite: for many years his wife had been the breadwinner.

There wasn’t much support from the late Si Newhouse, scion of the Newhouse family who own Vogue and many other publications. When Mirabella felt she had earned a place at their table, he told her: “Women don’t mean anything on boards.”

In the 1990s, Newhouse admitted they operated an “uncomplicated” company structure. There was the owner, Newhouse himself, in his 60s. The president of the company, Bernard Leser, also in his 60s. And Liberman, who by now was in his 80s. A trinity of old men were putting out thousands of magazines each year aimed at young women, and thought they knew best.

The callous behaviour towards female staff continued uninhibited. In Wintour’s early days they used the tactic of “managed competition”, which more or less just meant pitting people against each other. They thought it would make staffers work harder. Not exactly a relaxing environment. We know Wintour’s icy persona of today, but back then the atmosphere got even to her. Some reports claim that she would sit in her office bawling. It didn’t help that when she was appointed editor-in-chief the press immediately responded by supposing she was having an affair with Si Newhouse.

There are other problems with working for Vogue. You might expect a gossipy, somewhat snobby feel, but at times this reached a fever pitch of insanity. During Diana Vreeland’s tenure from 1963to 1971, editors would steal clothes from each other if they thought someone else found something good for a shoot. Screams came from the closet, tantrums, tears. They would threaten to throw themselves out of the window, and secretaries came in and out through revolving doors. Acts of ritual humiliation were performed at morning meetings if someone brought in an item of clothing that nobody liked.

The pay is notoriously low unless you’re high up (a popular joke played on how much independent wealth was needed to sustain a career at Vogue: one girl says to another, “I’ll have to get a real job, Daddy can’t afford to send me to Vogue any more”). The trips abroad and fancy clothing allowances create a kind of bondage. Think of Joan Juliet Buck, editor-in-chief of Vogue Paris from 1994 to 2001, who was told if she didn’t do a stint in rehab, she would forfeit her severance pay. She was completely sober, but attended the facility as she needed the money to take care of her elderly father.

There continue to be casualties; consider the controversy at Teen Vogue when Alexi McCammond was appointed editor-in-chief. The staff objected strongly due to what were described as “racist tweets” resurfacing. Despite a letter signed by 20 employees, Condé Nast planned to stick to their choice until McCammond herself resigned.

If I’d known all this, would the teenage me have still wanted to work at Vogue? On reflection, I’m glad I wrote the book (Glossy: the inside story of Vogue) instead.