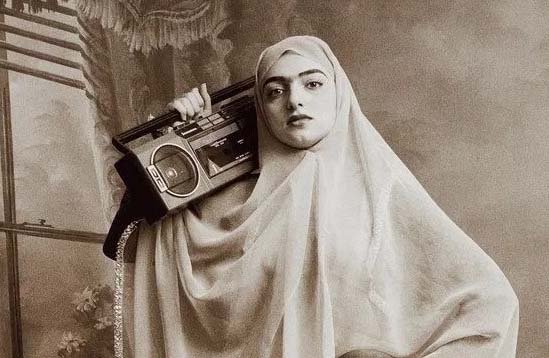 ‘Untitled from the Ghajar Series’

Inspired by studio portraiture from Iran’s Qajar dynasty in the late 19th and early 20th centuries, Ghadirian’s series of 33 portraits features models dressed in vintage clothes — short skirts worn over baggy trousers — but in each image is an incongruously modern element: A Pepsi can, a guitar, a pair of sunglasses, or — as here — a boombox (held by the artist’s sister, Nikki). The resulting portraits capture the dichotomy of womens’ lives in Iran, the contrast between the traditional and the modern, East and West, the public and private faces. “This conflict between old and new is how the younger generation are currently living in Iran,” Ghadirian told The Guardian in 2013. “We may embrace modernity, but we’re still in love with our country’s traditions.”

‘Icons of the Nile’

The late Egyptian artist received wide acclaim for his integration of famous figures from Egyptian history with traditional iconography from Pharaonic times and art styles from the 1950s and 1960s. This is a prime example of Avedissian’s work, with 25 panels featuring stars from Egypt’s ‘Golden Age’ of cinema and music — including Umm Kulthum and Dalida — against stencilled backgrounds. The auction house describes it as “a splendid mosaic of Egyptian cultural history that retraces his country’s past.”

Other editions of the Saudi army major and artist’s large sculpture have featured in Sotheby’s auctions before. The work is inspired by the realization that struck Gharem when his military promotion led to him spending much of his time behind a desk stamping papers: That “no matter how complex the logic that informed the thinking behind the decisions” the stamp reduced all of it to the binary choice of ‘stamp’ or ‘no stamp.’ The text on the stamp reads (in Arabic and English) “Have a bit of commitment” and “Inshallah.”

The Egyptian modernist pioneer remains one of the most collectible Arab modern artists in the world, and Sotheby’s hails this 1949 painting as “a rare masterpiece, depicting an extraordinarily industrial scene, which strongly represents the impressions of Said’s European influence, following his travels in the 1920s.” The brochure notes later add: “Said had an ability to capture the complexities of light in a way that gave all his paintings an otherworldly, soft dreamlike haze.”

The late Emirati artist’s 2015 large-scale abstract wall hanging is described by the auction house as “a prime example” of his assemblages “embodying both his philosophical underpinnings and preferred artistic practices” by combining “notions of Duchampian absurdity, notions of ‘meaninglessness’ and of found objects being re-envisioned into something other.” The natural imperfections of his handcrafted work stand in deliberate contrast to mass-produced, factory-made items.

This 1976 oil painting is typical of Sadr’s work from the mid-Fifties onwards, when she gave up painting on easels. “I cannot tell you the exact reason, but I felt an uncontrollable urge to put my canvases on the floor,” she once explained. “It allowed me to make much larger moves and offered me a greater control over my gestures. The relation between my body movements and the forms they produced fascinated me. I was interested in every aspect pertaining to the act of painting.” As the auction house puts it: “The lyricism of her work comes from the balance she strikes between the manipulation of the paint, the saturations of black and the shapes and angles she creates — to Sadr, there were infinite combinations of form and color.”

‘Untitled’ from the ‘Sand Painting’ series

The late Tehran-born artist shifted to abstraction in his work when he was studying in Rome in the 1950s and his mentor Toti Scialoja reportedly told him: “If you want to be a normal painter, then keep going like this. But if you are trying to become an artist, forget everything you have done and start all over again.” So he did. The series of sand paintings he created in the early Sixties became his most famous works. They were inspired by childhood memories sparked by a visit to Lake Albano with its black sand, he explained. “I was playing with black sand on the shore, suddenly the traces of my fingers in the sand caught my attention. I (left) my friends and went back to Rome with a bag of sand. Finding shapes in sand turned into a pastime and it took me months to transfer the patterns I found onto a canvas.”