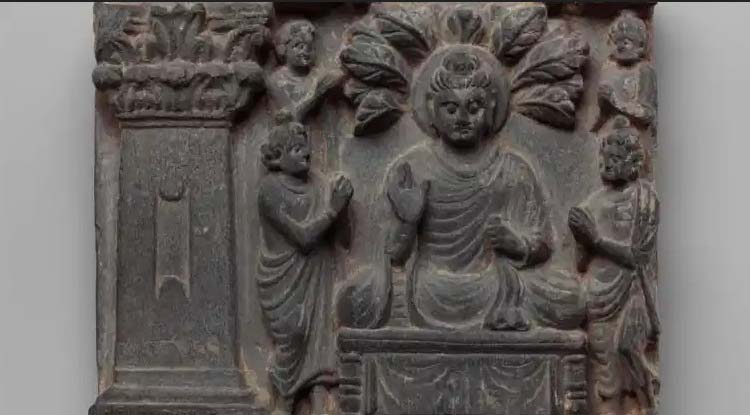 In 2001, when the Taliban blew up the monumental statues of the Buddha at Bamiyan in Afghanistan, it marked a tragic low in the history of religious iconoclasm. The destruction of the Bamiyan Buddhas, which had been constructed between 550-600 AD, broke a continuous 2,000-year-old historical and trading connection between what historians call “Greater Gandhara” and the Ganges Valley. While the core area of ancient Gandhara lies in north-west Pakistan, encompassing the foothills of the Salt Range, the area around Peshawar and the Swat Valley, Greater Gandhara includes eastern and northern areas of Afghanistan lying just across the Khyber Pass.

Journalist and author Sunita Dwivedi’s informative new book, Buddha In Gandhara, seeks to recreate the Buddhist culture and art of these regions. The first part of the book, set in Pakistan, is a conventional travelogue. The chapters on her travels are interspersed with historical and mythical tales of the region dating back to Alexander’s invasion in the fourth century BC. The second half of the book is a survey of Buddhist sites in Afghanistan, an area she had covered in an earlier travelogue, Buddha In Central Asia. The latest book marks the fourth in a loose series of books documenting a series of travels through Buddhist Asia.

The really impressive thing about Buddha In Gandhara is Dwivedi’s zeal in visiting every last stupa and monastic archaeological site that she can think of. The writing in the book hardly sparkles, and has a rushed quality to it, with a breathless unspooling of names of places and people that doesn’t always separate historical facts from legendary material. However, what the book lacks in polish, it makes up for in the tour of Gandhara that it offers. As a dedicated completist, Dwivedi does her readers a great favour. Through her travels we visit the giant stupa of Manikyala outside Islamabad, the monumental hill monastery of Takht-i-Bahi, the ancient monastic cities of Charsadda, the archaeological sites of Jamalgarhi, and the impressive Buddhist sites of Taxila, a UNESCO World Heritage Site. Most of the Buddhist monuments that Dwivedi visits have their origins in the high Kushan era, built around the second and third centuries AD.

She even tries to visit the ancient Buddhist stupa and monastery of Ali Masjid on the Khyber Pass, but there’s a limit to even what someone with Dwivedi’s formidable diplomatic contacts can manage. However, reading the book gives a sense of the state of the Gandharan antiquities in Pakistan, and we learn of the efforts being made by Pakistani historians and archaeologists to preserve and cherish this heritage. Given current political relations with Pakistan, it is highly unlikely that most Indians will get to see the grand stupas and Buddhist art and excavated sites like Taxila or Takht-i-Bahi. Which is a shame, because the story of Gandhara is that of a time when South Asia, driven by Buddhism and trade, was cosmopolitan and international in outlook, and not sniping from behind heavily militarised borders.

The story of Gandhara is also a story of the Kushan empire, which, between the first and third centuries AD, ruled over a vast tract from Afghanistan to present-day Uttar Pradesh. At its height, the empire provided political stability and mobility to the diverse people it ruled over, including South Asians, Scythians, Greeks, Bactrians and Central Asian tribal groups. The Kushan empire was a melting pot of new ideas. The empire’s most notable contribution in terms of art history, however, was that it gave a body to the Buddha.

In their book Confluences: Forgotten Histories From East And West, Ranjit Hoskote and Ilija Trojanow have theorised that the greater international contact during the Kushan era, coinciding with a Buddhist proselytising push to new territories along major overland trade routes, threw up the need for fresh religious innovations. At this time, new Mahayana sutras started pushing Buddhism towards becoming a religion of the masses with a distinct devotional aspect centered on the Bodhisattvas and the Sakyamuni himself. Such devotional fervour required objects of worship.

By the first century AD, the Gandhara region had already developed local artistic traditions based on Greek art influences on the one hand, and those of north and central India on the other. It was a region of competing religious cults as well, mixing Hellenistic gods with those from Iran and the Ganges valley. Deities like the Iranian solar god Mithras influenced the cult of the Bodhisattva Maitreya. Others, like Oesho with his trident, and Nanaia riding a lion, entered the South Asian religious mainstream as Shiva and Durga. The cult of stupa worship, the prosperity of new monasteries, and an obsession with the relics of the Buddha as a source of suprahuman power, all came together to give the world the first iconic depictions of Buddha.

Under the Kushan emperor Kanishka’s patronage, the monk Ashvaghosha composed the first biography of the Buddha, codifying the oral legends into the Buddhacharita, the first great work of Sanskrit in the subcontinent. Such charitas, in turn, gave artists discreet scenes from the Buddha’s life to work with. Within a few centuries, these were codified in the ateliers of Gandhara and Mathura. Monks from Gandhara travelled to China to begin the translation cycles of the Mahayana sutras, while for the latter, the Buddhist sites of Gandhara took on a level of importance comparable to that of Bodhgaya. If the first six centuries of the first millennium AD marked one of the watershed moments in the history of ideas, Gandhara was right in the middle of it.

Influenced by colonial-era English historians like Vincent Smith and T.W. Rhys Davids, South Asian historiography has had, for over a century, internalised the narrative of sudden beginnings and endings of historical-cultural eras. Thankfully, in recent decades, a clearer picture is emerging of the how civilisation-level cultures actually begin and end—with a slow fade at both ends, like a grand piece of music. The existence of Buddhism in India didn’t come to a grinding halt with the destruction of the Nalanda and Vikramashila monasteries in the 12th century AD. For example, we have the account of the south Indian Vajrayana monk Buddhaguptanatha, who travelled to Tibet in the late 16th century and became the guru of the famous Tibetan monk and historian Taranatha. Similarly, Gandharan Buddhism didn’t just disappear into thin air sometime around seventh-eighth centuries AD.

Take the case of north Afghanistan’s Naubahar (from the Sanskrit Nava Vihara) monastic complex near the city of Balkh. Founded either during or immediately after the rule of the Kushans, the Naubahar grew to become an immensely prosperous and respected monastery. It was considered one of the finest repositories of Mahayana and early Vajrayana thought outside the subcontinent. During his visit in the seventh century AD, Hsüan-tsang sung his praises of the Navasangrahama, as it was known, and called it a mini-Rajagriha. When the area came under the dominion of Islamic Arab rule later that century, the hereditary family of high priests of the Naubahar, the Barmaks (from the Sanskrit Pramukh or chief) converted to Islam.

Indeed, first under the Umayyad Caliphate and later as chief viziers of the Abbasid Caliphs in Baghdad, the Barmakids achieved great political power and retained their reputation as wealthy patrons of the arts who showed great tolerance for other religions. In fact, many orthodox Muslims of the time considered the family to be half-hearted in their faith at best, given that some of their family members continued to officiate at the Naubahar monastery. The monastic complex was noted as active and prosperous till as late as the 10th century AD by Arab travellers in the area.

Balkh remained renowned as a centre of art and culture in the Arab world and called the “mother of cities” right up to 1220 AD when it was destroyed by the Mongols. As Dwivedi narrates in the book, there’s even record of the western gate of the city of Smarkand in the 10th century being called the Naubahar Gate. Today, the Nawbahar province in Afghanistan hosts the monumental Buddhist stupa of Top-e-Rustam and the hill-carved monastic complex ruins of Takht-i-Rustam.

The core area of Gandhara too continued to function as an important site of Buddhist teachings and art till at least the early 11th century, when Gandhara was overrun by Mahmud of Ghazni. While we know of Ghazni’s spectacular trail of destruction, this was nothing new. In the fifth century, Kashmir and Gandhara had been similarly overrun by the Huns from Central Asia. The most famous king of the Huns, Mihirakula, was a staunch Saivite and sought to end Buddhism’s pre-emince in the area. In fact, Dwivedi narrates the fate of the Dharmarajika Vihara near Taxila. The monastery was the site of a massacre, as the find of skeletons with severed heads attests. The Dharmarajika was also burnt down and abandoned around that time. Buddhism endured, and even rebounded, but state patronage to Brahminical Hinduism and, in particular, to Saivism, continued to grow till the advent of Islam.

The influence of Gandharan Buddhism endured right up to the 12th century AD at least. The texts and art of tantric Buddhism (the Vajrayana) gives great importance to Uddayana (the Swat Valley), as a major spiritual centre. Famous siddhas (tantric adepts who gained enlightenment in one lifetime) like the princess Lakshminkara or key figure of Tibetan Buddhism, Padmasambhava, all hailed from Uddayana.

Dwivedi’s book gives a physical shape to these important sites and forces us to re-imagine Gandhar beyond the status that Indian historiography gives it: as merely a transmission zone, somehow foreign to “Indian” civilization. The same can be said of the Kushans, often portrayed in Indian historiography as a placeholder dynasty sandwiched between the glories of the Mauryan empire and the Gupta empire. As a small step towards rectifying this historical error, Dwivedi deserves our thanks.