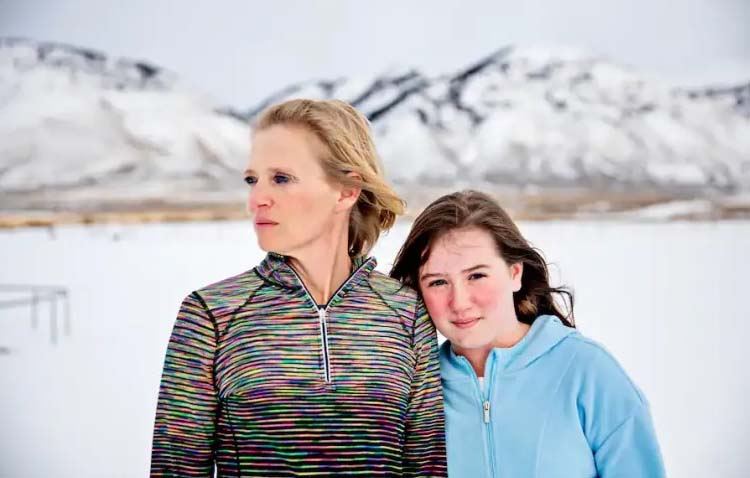 Before the coronavirus pandemic, 13-year-old Madilyn Dayton played volleyball and basketball and ran track. She attended in-person school — and still had plenty of energy left over to race around her small town of Cokeville, Wyo., with friends.

Today, more than six months after being infected with the virus, she’s struggling with lingering effects of her illness.

While doctors recently cleared her for limited physical activity, Madilyn estimates she can do only about half of what she used to do. Even Zoom school can be too much some days.

“She’ll zonk out in front of her computer,” her mother, Marilyn Dayton, said, “and I’ll have to wake her.”

Cases of children with persistent symptoms after covid-19 are rare but growing, doctors say, unnerving parents and physicians who are tracking the often strange and fluctuating constellation of symptoms. On Facebook support groups and other social media, families describe their struggles to be taken seriously and express frustration that basic scientific knowledge is lacking about what is going on.

Many of the children who suffer from enduring effects report they continue to feel lousy — even though they have cleared the virus, are not suffering from obvious organ damage, and their scans, bloodwork and other tests come back clean.

Public health officials and scientists often talk about how children have been largely spared from the devastation of covid-19. But their story is incomplete without understanding “long-haulers.”

Nearly 3.17 million U.S. children have tested positive for the virus. Few have been hospitalized and even fewer have died, but somechildren — whether they had mild or severe cases, or no symptoms at all — are developing problems that last for weeks or months after their initial infection. According to surveys and studies of small groups of children, the symptoms include fatigue, headache and heart palpitations.

In the early months of the pandemic, when many children sheltered at home, the phenomenon of long covid appeared to be limited to adults. But as schools, sports and other activities started up, it has become clear children are vulnerable, too.

The World Health Organization has recognized that covid-19 “can sometimes result in prolonged illness, even in young adults and children without underlying chronic medical conditions,” but efforts to characterize the illness so far have relied mostly on phone surveys, case studies and anecdotal evidence.

A growing number of medical centers — Boston Children’s Hospital, Kennedy Krieger Institute in Baltimore, National Jewish Health in Denver and Norton Children’s Hospital in Louisville — are setting up multidisciplinary clinics to try to better understand and treat these patients. And a research project funded by the National Institutes of Health that is getting underway will explore the range of impacts covid-19 has had on children.

“One of the most difficult things about caring for these patients is they have a lot of questions about short- and long-term effects, about what to expect,” said Dongngan Truong, a pediatric cardiologist at Intermountain Primary Children’s Hospital in Salt Lake City, where Madilyn is being treated. “And right now, we don’t know what to expect.”

Children infected with SARS-CoV-2 — the scientific name for the novel coronavirus — are believed to suffer from two distinct illnesses. The first is acute infection with the virus that may lead to respiratory distress, blood coagulation issues and multisystem organ involvement similar to what adults experience. There’s also a mysterious and rare, but serious, inflammatory illness known as MIS-C that is limited to pediatric patients and a handful of young adults and appears to occur weeks or months after infection.AD

Early anecdotal reports from pediatric researchers suggest that both illnesses appear to have similar longer-term manifestations, at least superficially.

Formal data on how many children are affected is spotty and incomplete, but Britain’s Office for National Statistics reported numbers last month that took doctors by surprise. Among children younger than 11 with confirmed positive tests, 13 percent had at least one symptom five weeks after infection. Fatigue was the most common complaint, but the affected children also described respiratory problems, insomnia and other issues.

Christina Pagel, who runs the clinical operational research group at University College London, tweeted that the numbers in children should not be ignored.https://platform.twitter.com/embed/Tweet.html?dnt=false&embedId=twitter-widget-0&frame=false&hideCard=false&hideThread=false&id=1363473889951637504&lang=en&origin=https%3A%2F%2Fwww.washingtonpost.com%2Fhealth%2F2021%2F03%2F18%2Fvirus-longhaul-coronavirus-children%2F&siteScreenName=WashingtonPost&theme=light&widgetsVersion=e1ffbdb%3A1614796141937&width=550px

A small study by Italian doctors posted earlier this year before peer review reported that among children who tested positive at Gemelli University Hospital, the largest in Rome, the percentages were even higher. More than half of the 129 children had persistent symptoms after four months, and 43 percent felt effects during daily activities.AD

Danilo Buonsenso, a pediatric specialist at the hospital, and colleagues noted that although long-term symptoms “were more common in symptomatic or hospitalized children, they were also described in those individuals who were asymptomatic.”

In Sweden, the national television broadcaster recently reported that more than 200 children had been diagnosed with long covid, with some “completely bedridden.” Researcher Jonas Ludvigsson of the Karolinska Institute in Stockholm published five case reports of long-haul covid-19 in children in Acta Paediatrica, a top international pediatric medical journal.

The children in the paper ranged in age from 9 to 15 years old. There were four girls, and one boy. All were in good health except for one with asthma and allergies. None was initially hospitalized (one child later developed heart inflammation and spent three days as an inpatient) but had symptoms such as fatigue, difficulty breathing, and heart palpitations or chest pains. Ludvigsson noted in the paper that “the fact that the children in the case report had still not returned fully to school at the time of writing, despite Swedish schools being open up to the age of 16 throughout the pandemic adds to the seriousness of the matter.”

In a major initiative announced this month, NIH is coordinating with pediatric researchers to look at the doses and timing of treatments and why some children appear at greater risk for severe illness. A major component of the initiative involves looking at long-term outcomes.AD

One working theory is that long covid may be similar or related to chronic fatigue syndrome, a condition characterized by extreme and persistent tiredness that cannot be explained by another medical condition. Researchers who study the illness speculate that people with the ailment may have once been infected by a virus they never cleared, a theory some experts believe may also apply to covid-19. But for now, no one really knows.

A few recent studies have shown some young adults may have a genetic susceptibility to a hyperinflammatory response, and researchers have been curious to look for those children, too.

Adrienne Randolph, a professor of pediatrics at Harvard Medical School, said she worries some lingering issues may originate from neurological complications that are more difficult to diagnose. She said it is critically important to understand the cause of complications and their impact on cognition and development as the number of children infected rises.AD

While children seem to be protected from some aspects of the virus, “it’s still better that they don’t get exposed to the virus at all,” Randolph said.

“It can cause rare but severe complications,” she said. “The message is kids aren’t completely safe from this virus.”

In a study published last week in JAMA Neurology, researchers detailed neurological issues in children with covid-19 or MIS-C. Most were transient, but some were life-threatening or fatal.

Truong from Intermountain Primary Children’s, and Jane Newburger, a pediatric cardiologist at Boston Children’s, are teaming up to lead a 32-center study that will follow MIS-C patients for five years. Newburger said that while many children return to earlier activity levels, others — mostly preteens and teens — suffer from challenges.

Some experience difficulty with thinking, remembering, processing new information or paying attention. Others report what is known as orthostatic intolerance, meaning they might develop worsening symptoms when they change positions, such as sitting down or standing up.AD

“Some kids even wake up feeling tired,” Newburger said.

While scientists have documented that viral syndromes can lead to persistent illness, the pandemic “is a remarkable kind of event in medical history.”

“There is a huge need to understand this better,” Newburger said. “The entire world is basically exposed at all ages to a brand-new virus. The number [of cases is] so large that we are seeing many types of complications that maybe you saw sporadically every now and then and sometimes only every few years in kids before.”

When 15-year-old Delaney DePue got sick from the coronavirus in June, she recalled that her illness felt pretty mundane. She had a dry cough, lost her appetite and had body aches, but her fever never went above 101.3, and she was up and about in about five days.

For months, she felt awful anytime she tried to do anything physical. She’d noticed she was short of breath and her heart felt like it was beating rapidly. Before covid-19, Delaney — who aspires to be a choreographer when she grows up — used to attend ballet, contemporary, jazz, hip-hop and tap dance classes at least four times a week.

“When she tried to go back virtually after covid, she was like, ‘Gosh, I can’t do it,’ and had to go lie down in bed,” her mother, Sara DePue, recalled.

“Everything was exhausting,” Delaney said. “I wasn’t able to do anything.”

The first doctors Delaney saw weren’t too worried. She was young and previously healthy, and they thought the symptoms would go away on their own. But as Delaney’s condition appeared to get worse, her mother contacted an infectious-disease doctor who got a pulmonologist and cardiologist involved.

They discovered Delaney had symptoms of COPD — chronic obstructive pulmonary disease — a condition usually seen in older adults, and put her on steroids and asthma medication. While her daughter’s heart condition is still being evaluated, Sara DePue said doctors suspect Delaney may have a condition that causes an abnormal increase in heart rate when she sits or stands and that can follow viral illness.

In February, after nine months of feeling sick, Delaney was able to return to dance classes. But fatigue comes and goes. Three weeks ago, she was able to do four classes in one week. The following week, none.

She said she remains optimistic that her health is on an upward trajectory: “I’m not my full self, but I am able to do a few things, which is really a blessing.”

Madilyn’s battle with SARS-CoV-2 began in October with a headache. A few days later, she couldn’t eat and developed a rash all over. Then one morning, she was unable to move at all. She was taken to Intermountain Primary Children’s, where she spent six days — four in intensive care — and was diagnosed with MIS-C.

Neither of her parents, nor her four siblings, had been sick during the pandemic, and there had been few cases in their area. So her mother was perplexed when doctors told them she had antibodies to the virus.

When Madilyn was discharged, doctors worried mostly about her heart and warned about permanent damage. But at a follow-up appointment in February, her heart appeared to have regained its squeezing function. Her recovery is consistent with data published this month that showed children who had the inflammatory syndrome and subsequent severe cardiac problems returned to normal within a month.

“They saw chronic fatigue,” Marilyn, her mother, said. “All the bloodwork — everything came back normal. But she sleeps a lot. She can’t make her body do what it used to do.”

Madilyn recalls returning to her basketball team — she usually plays guard — only to be on the sidelines: “I was frustrated and thought, ‘Why am I sitting here and not playing?’”

Every week, she and her parents talk about whether she’s well enough to return to school in person. Every week, they delay another week to give her more time to regain strength. Until then, she is enrolled in an online program.

Madilyn said she feels she’s improving a little every day and has made it her goal to run up a hill near her house every day.