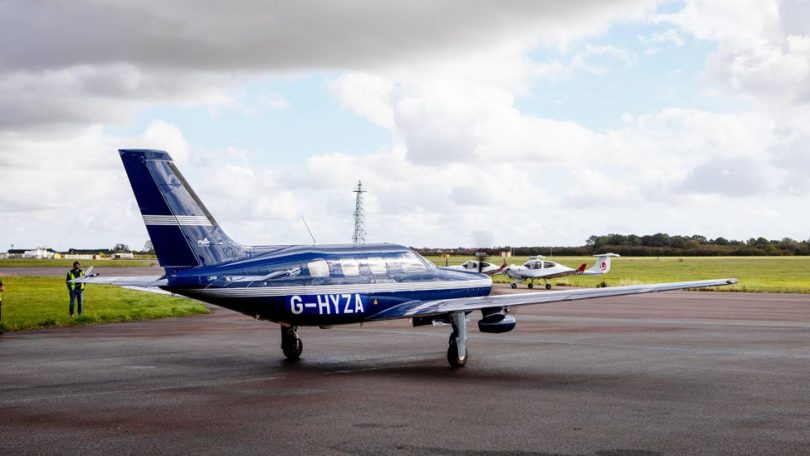 A record-breaking commercial-scale hydrogen plane has taken off in the UK, with more set to join it soon. How far can such planes go in cutting the aviation industry’s emissions?

As the plane rose from the runway for what was to prove a smooth and uneventful flight, the team breathed a sigh of relief. The six-seater Piper M-Class had been fitted out at a research and development hub at Cranfield airport in the UK to run on hydrogen, and on this maiden flight in the late summer of 2020 everything worked perfectly. With that flight, ZeroAvia, the California-based start-up that had developed the aircraft with partners in Britain and elsewhere, was ready to move to the next stage in the journey towards zero carbon aviation.

A catchphrase for the transition to a low or zero carbon economy is “electrify everything” – that is, create a world in which most human activities, from manufacturing and construction to transport and tourism, run on electricity generated from low or zero carbon sources such as wind, solar and perhaps nuclear power. But there is a problem: some sectors look to be hard if not impossible to electrify in the near and medium term, and aviation is, perhaps, foremost among them.

Before the pandemic grounded most flights, commercial aviation accounted for about 2.5% of global emissions of carbon dioxide. It sounds like a small proportion of the whole, but it is more than those of Germany (2.2%), and this is not the whole story. Carbon dioxide accounts for about half of aviation’s contribution to what is known as its effective radiative forcing – that is, its total contribution to the factors that actually drive a rise in global average temperature. Contrails – water vapour trails from aircraft – are aviation’s largest other factor.

Importantly in the context of flight, hydrogen packs a lot of energy per unit of mass

The good news is that commercial aviation has an excellent track record in improving efficiency. Carbon dioxide emissions per passenger flight have fallen more than 50% since 1990 thanks to improved engines and operations. The bad news is that these gains have been overwhelmed by rising volumes of air traffic. This has increased by at least a fifth over the past five years, and is predicted to reach 10 billion passengers a year by 2050.

HyFlyer I is a six-seater plane, but its successor is planned to seat up to 20 passengers (Credit: ZeroAvia)

At first glance, hydrogen looks to be a good solution to the challenge of flying without wrecking the climate. Whether hydrogen is used to power a fuel cell to generate electricity or directly combusted for motive power, the only waste product is clean water. Importantly in the context of flight, hydrogen packs a lot of energy per unit of mass – three times more than conventional jet fuel, and more than a hundred times that of lithium-ion batteries.

Governments and companies are investing in this potential. ZeroAvia’s 2020 hydrogen-powered flight, known as HyFlyer I, was supported by the UK Government, whose Jet Zero Council promises “a laser focus on UK production facilities for sustainable aviation fuels and the acceleration of the design, manufacture and commercial operation of zero-emission aircraft.”

The UK government, together with private investors and commercial partners are supporting ZeroAvia in the development of an aircraft with a hydrogen-electric (fuel cell) powertrain capable of carrying up to 20 passengers about 350 nautical miles (648km). ZeroAvia’s founder and chief executive Val Miftakhov, says the company expects to offer commercial flights using such a plane as early as 2023, and that by 2026 it will be able to realise flights over a range of 500 nautical miles (926km) in aircraft with up to 80 seats. For 2030, Miftakhov has even bigger plans: “We will have single-aisle jets, 100-seat category,” he says.

There is ambition in mainland Europe too. Hydrogen “is one of the most promising technology vectors to allow mobility to continue fulfilling the basic human need for mobility in better harmony with our environment”, says Grazia Vitaldini, chief technology officer at Airbus, the world’s largest aircraft manufacturer. In September 2020, Airbus announced that hydrogen-fuelled propulsion systems would be at the heart of a new generation of zero-emissions commercial aircraft. The project, named ZeroE, is a flagship of the European Union’s multibillion-euro stimulus package, aimed at greening the bloc’s economy.

Airbus has presented three concept planes which it says could be ready for deployment by 2035. The first is a turboprop (propeller) driven aircraft capable of carrying around 100 passengers about 1,000 nautical miles (1,850km). The second, a turbofan (jet), could carry 200 passengers twice as far. Both look similar to already existing planes, but ZeroE’s third concept is a futuristic-looking blended-wing design that is a striking departure from commercial models today. Airbus says this third design could be capable of carrying more passengers over longer distances than the other two, but has not released more detail at this stage. All three designs are envisaged as hydrogen hybrids, which means they would be powered by gas-turbine engines that burn liquid hydrogen as fuel, and also generate electricity via hydrogen fuel cells.

Airbus is aiming to have its three concept hydrogen aircraft in operation by 2035 (Credit: Airbus)

The work at ZeroAvia and Airbus has aroused a lot of interest, but not everyone in the aviation industry is convinced hydrogen will play a major role in a transition towards low or zero carbon flight.

The disadvantages start with the physics and chemistry. Hydrogen has higher energy by mass than jet fuel, but it has lower energy by volume. This lower energy density is because it is a gas at typical atmospheric pressure and temperature. The gas needs to be compressed or turned into a liquid by cooling it to extremely low temperatures (-253C) if it is to be stored in sufficient quantities. “Storage tanks for the compressed gas or liquid are complex and heavy,” says Finlay Asher, a former aircraft engine designer at Rolls-Royce and founder of Green Sky Thinking, a platform exploring sustainable aviation.

And there are other challenges. The energy density of liquid hydrogen is only about a quarter of that of jet fuel. This means that for the same amount of energy it needs a storage tank four times the size. As a consequence, aircraft may either have to carry fewer passengers to make space for the storage tanks, or become significantly larger. The first option, which applies to Airbus’s first two concept planes, would mean a reduction in ticket revenue, other things being equal. The second option, embodied in Airbus’s third concept, requires a bigger airframe, which is subject to more drag. Further, an entire new infrastructure would need to be put in place to transport and store hydrogen at airports.

In addition, there is the question of whether hydrogen can be produced at scale and at a competitive price without itself having a large carbon footprint. The great majority of hydrogen used in industry today is created using fossil fuel methane, releasing carbon dioxide as a waste product. Hydrogen can be produced from water through a process called electrolysis, driven by renewable power, but this process is currently expensive and requires large amounts of energy. Only about 1% of hydrogen is produced this way at present.

As things stand, liquid hydrogen is more than four times as expensive as conventional jet fuel. Over the coming decades the price is expected to drop as infrastructure is scaled up and becomes more efficient. But according to Britain’s Royal Society and the management consulting group McKinsey, it is likely to remain at least twice as expensive as fossil fuels for the next few decades.

These factors, and others, give pause for some major players in aviation. Sean Newsum, director of environmental strategy at Boeing Commercial, Airbus’s main rival, recently told the Financial Times: “Our belief is that it will take a while for all the technology and elements of hydrogen propulsion to be worked out before we can get to… commercial use.” And a key advisory body to the UK government also has doubts. “Switching to direct hydrogen adds decades into the transition,” says David Joffe, of the Climate Change Committee, an advisory body to the UK government.

So what are the alternatives? In September 2020, the Air Transport Action Group, a Geneva-based body that speaks on behalf the global aviation industry, published a set of scenarios which suggest that, even as the volume of air traffic increases, it will be possible for global aviation to reach zero emissions of carbon dioxide – but only a decade or so later than 2050. According to these scenarios, the direct use of hydrogen will play only a marginal role, but the game-changer will be what are termed “sustainable aviation fuels”, or SAFs.

This catch-all term covers a range of products, such as biofuels, that result in low net emissions of carbon dioxide and other pollutants associated with conventional jet fuel. The advocates of SAFs argue they have a number of clear advantages over pure hydrogen. Because they are chemically identical to existing jet fuel, they can in principle be “dropped in” to existing systems with little or no redesign, without delay, and without the substantial ancillary investments required for hydrogen-powered airframes and their supporting infrastructure. Paul Stein, chief technology officer at the engine makers Rolls Royce, argues they are the key to a more sustainable future. “If SAF production can be scaled up – and aviation needs 500 million tonnes a year by 2050 – we can make a huge contribution for our planet,” he says.

Biofuels are one alternative to fossil fuels for aviation, but they require large tracts of land to grow (Credit: Getty Images)

SAFs can be divided into two categories. The first are biofuels made through the chemical or thermal treatment of biomass such as agricultural residues and other wastes. A second category is electro fuels, or “E fuels”. Through these fuels, which are also known as “power to liquid”, hydrogen could end up playing a key role in aviation after all.

E fuels are made by reacting hydrogen with carbon dioxide to make “syngas”. This is then converted through what is known as Fischer-Tropsch process into “e-crude” – a crude oil substitute that can be refined to jet fuel and other fuels. If the large amount of energy required at each stage of manufacture is sourced from zero carbon sources, then the whole process can be carbon neutral, with no more carbon dioxide in the atmosphere after the flight than before the fuel was made.

Using direct air capture technology developed by the Swiss company Climeworks to source CO2, and hydrogen produced from water with renewable energy, the Oslo-based company Norsk e-Fuel aims to open what may be the world’s first E fuel industrial plant Herøya, Norway, in 2023, producing 10 million litres of fuel per year for the Norwegian and European markets. The next step in 2026 would be a plant capable of 100 million litres a year. A full-sized plant could provide half the fuel for the top five most frequently serviced flight routes within Norway, cutting their emissions by half, says Karl Hauptmeier, Norsk e-Fuel’s managing director.

For now, one thing remains almost certain: hydrogen and E fuels are likely to continue to be substantially more expensive than conventional jet fuel for years or decades to come, limiting their role in greening aviation – unless the other costs of aviation come to be weighed differently. Campaigners such as Leo Murray of the campaign group Possible argue that conventionally-fuelled aviation must be priced to reflect the cost of the damage it causes to the climate. This, he argues, might mean higher ticket prices, but it could also give us aviation that does not cost the Earth.