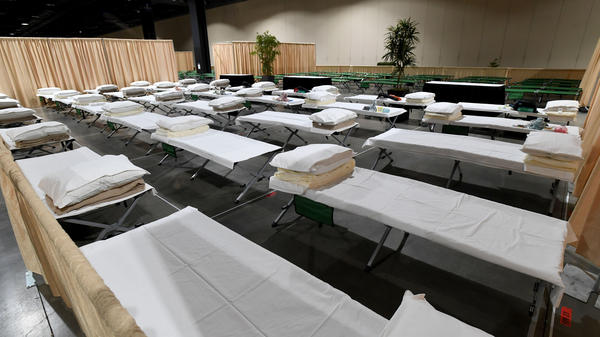 WASHINGTON (NPR): Immigration advocates credit the Biden administration with acting quickly to move tens of thousands of migrant children out of jail-like detention facilities on the U.S. southern border and into safer emergency shelters.

But the advocates are now growing increasingly concerned about the conditions in the mass shelters, such as a military base in El Paso, Texas.

“We saw a lot of very traumatized children,” said Leecia Welch, an attorney at the nonprofit National Center for Youth Law, referring to conditions in the tent shelters at Fort Bliss. “The girls told us that a lot of the girls in the tent were crying a lot and they needed to talk to someone because they were having thoughts of self-harm.”

The Biden administration is now caring for almost 20,000 migrant children who came to the United States without their parents. Most of them are staying in the emergency shelters, which are run by the Department of Health and Human Services.

The facilities include a convention center in Dallas, a coliseum in San Antonio and a former oil field in Midland, Texas.

The Biden administration defended the use of the shelters, emphasizing that it inherited an under-resourced program for unaccompanied migrant children.

A senior administration official noted that the average stay at the shelters has dropped from 45 days to about 30, and said they have high standards for child care.

But some kids end up staying much longer than the average.

One of the problems, advocates say, is there are not enough case workers working on finding families and vetting sponsors.

Lidia Cuyuch Brito, who’s 16 and from Guatemala, has been in U.S. government custody for 70 days, first in Texas and now Pennsylvania.

“The truth is I don’t know what is happening with her,” Juana Cuyuch Brito said.

She said her sister is lonely and confused about why other children have been able to leave, but she hasn’t.

Clara Long of Human Rights Watch said she had been eager to see kids get out of border facilities. But now, as the use of the emergency shelters has expanded, she has become alarmed.

“What’s happened now is that after this focus on infrastructure and getting kids into these large warehouse converted warehouse type facilities, we have a system of mass detention of kids. And that’s definitely not where we should be ending up,” Long said.

Peter Schey, co-founder of the nonprofit Center for Human Rights and Constitutional Law, is a lawyer who’s behind a decades-old agreement that determines the conditions for holding migrant kids.

He argues the emergency shelters are a violation of that pact, known as Flores, because they are not licensed. But he says his team has been warned against pursuing the case in court.

“If we put too much pressure on the administration for its violations of the Flores settlement and its unnecessary detention of these children, it could easily respond, and the suggestion has been made to us that it may respond by simply changing part of its policy,” Schey said.

For example, Schey said, the government could stop allowing children older than 14 being allowed in the country, and remove 15-, 16- and 17-year-olds.

“We do not want to be responsible for that,” he said. “As bad as the conditions may be for these children in stadiums and in convention centers, they are an improvement over being forced to live on the streets in some border town where children are subject to extortion, to rape, to crime, etcetera.”

Department of Health and Human Services officials told NPR they notify Flores lawyers about every new shelter and welcome them to visit. They added that they’re working to increase the number of licensed beds.

Leon Fresco, who worked on this issue for the Obama administration’s Justice Department, said Schey is technically right that the facilities should be licensed, but he said there’s some leeway under the law during emergency conditions.

“In times that there is a surge, the administration does not have to have the minor in a licensed facility that is not secure, but they have to show that they’re moving as quickly as possible to having that infrastructure,” he said. “But it’s not an infrastructure you can get in a matter of days or weeks; it takes months.”

Fresco said there are no easy choices, but that the shelters are the better alternative — until you can move children to their parents or family.

Welch, of the National Center for Youth Law, said it’s important to recognize the “valiant efforts” the administration made to move children out of border facilities run by U.S. Customs and Border Protection.

She has been impressed by the deployment of thousands of federal employees and local volunteers who help stand up the emergency intake sites.

But she said it’s also premature for the administration “to take a victory lap” when there is government data she has reviewed that shows more than 300 children have been at a Dallas convention center for more than 50 days.

“From my perspective, as a child advocate and as a mom,” Welch said of the Dallas site, “when you’ve got 2,300 kids sleeping in the same massive conference room and they’re only getting a few minutes of fresh air a day while they’re waiting to take a shower in the loading dock, and it’s going on for months, I mean, the government is just not living up to an acceptable standard of care.”