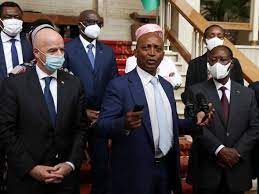 ZURICH (Agencies): African qualifying groups for next year’s World Cup have been postponed and will start in September instead of June, FIFA said Thursday. FIFA cited “current disruption caused by the COVID-19 pandemic” for the decision, which was taken along with the Confederation of African Football.

Ten groups of four teams each were scheduled to play two rounds of games from June 5-14, and two more in each of September and October. The groups will now run through November.

The 10 group winners will advance to a playoff round that has now been postponed from November to March. The five winners of two-leg playoffs will represent Africa at the 2022 World Cup in Qatar. The qualifying matches in June were already due to be disrupted by a CAF decision this week that suspended many stadiums from staging national team games.

A total of 20 of CAF’s 54 member federations are now said to lack a stadium meeting minimum requirements, including eight still involved in World Cup qualifying. Those federations were asked to propose replacement venues in neutral countries which would add to cross-border travel amid the coronavirus pandemic.

CAF president Patrice Motsepe was elected in March promising to improve Africa’s soccer infrastructure. The South African mining billionaire was unopposed in the vote when other candidates stood aside in a deal brokered by FIFA president Gianni Infantino.