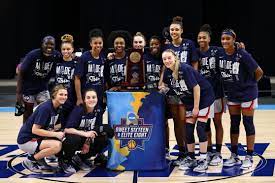 Controversial call: The refs swallowed their whistles on DiJonai Carrington’s final drive. Sure looks like she was fouled.

Controversial quote: Baylor coach Kim Mulkey said the NCAA should get rid of COVID testing for the Final Four.

“There’s four teams left … Wouldn’t it be a shame to keep COVID testing and then you got kids that end up positive tests and they don’t get to play in the Final Four. You need to just forget the COVID tests.”

Fun fact: The Cougars are 6-0 all-time in the Elite Eight, the most wins without a loss by any program since the round began in 1951.

Nightcap: Baylor held off Arkansas, 81-72, to advance to its first Final Four since 1950. Only Oregon has ever gone more seasons (77) between Final Four appearances.