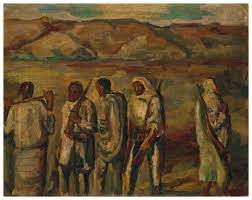 Eleven artworks by the brother and sister duo will be part of the auction’s offering, with two being presented during a live sale on April 14, and nine to be included in the 20th century art online sale being held from April 7-19.

Her brother’s work also set an auction record in 2015 for “The Temple of Karnak,” painted in the 1930s, selling for $62,500 during Christie’s Dubai Middle Eastern Art auction.

“The auction will bring these pioneering Egyptian modern artists to the attention of our international collectors around the globe… These works are also highlighting the artistic and theoretical links between the Naghis and their friend, French artist André Lhote, who in the 1950s extensively worked closely with Effat in Egypt,” added Didier.

Mohammed, an Egyptian diplomat, was a renowned painter. His travels and studies in Europe brought him to the core of the artistic and cultural revolutions of the early 20th century, which led him to found the “Atelier d’Alexandrie” in Alexandria in 1935.

Mohammed was also Egypt’s delegate to the UNESCO Fine Arts Commission in London and Paris in 1946, and later settled in Italy from 1947 to 1950 where he took on the position as director of the Egyptian Academy of Arts in Rome. His work was presented twice at the Venice Biennale, in 1948 and later in 1954.

She was then inspired by the local archaeological and folk artefacts, which often appear in her works, but also by astrology.

Although much younger than her brother, Effat was one of the leading female figures of Egypt’s modern art scene in the 1950s-1970s. Integrating a wide variety of materials, antique painted wood, and magic amulets, Effat produced densely textured and colorful pieces resonating the primitivist aesthetics rooted in Egypt during the 1920s.