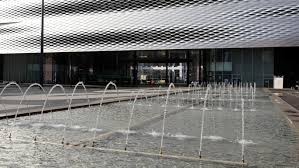 ZURICH (Reuters) – The hubbub that descends each summer on a sleek exhibition hall in Basel, where collectors snap up art and hunt for hot-ticket new talent, is likely to be replaced this year by lines of socially distanced Swiss waiting for COVID-19 vaccines.

The Herzog & de Meuron building usually hosts one of the world’s biggest art fairs in June, but last year’s event was cancelled due to the pandemic and this year’s has been moved to September. The adjoining congress centre, meanwhile, has been turned into a vaccination hub.

The art world is reeling from the impact of lockdowns, travel bans and social distancing, and fairs like Art Basel suffered more than most. The business of buying and selling art is having to adapt to limit the damage.

But the picture was uneven, as buying by the ultra-wealthy, notably from Asia, held up.

In contrast to the 2007-2009 financial crisis, when many of the world’s rich lost money, the super-rich have become richer during the pandemic as financial stimulus and volatile markets served to increase their fortunes.

Big auctions houses, led by Sotheby’s and Christie’s, were already used to telephone bidding and online sales, and so could pivot relatively easily to appeal to cash-rich clients.

Both reported an overall dip but saw record online activity and resilience among Asian buyers, while pre-pandemic trends of interest in Black, female and living artists were reinforced.

This year, they hope to build on that, capitalising on an influx of young collectors who have found the online world more accessible than old-style auction rooms, and as more traditional buyers yearn to return to the real world.

“There is enormous pent-up demand for experiences and even spending, once there’s a bit more stability and predictability,” Sotheby’s Chief Executive Charles Stewart told Reuters.

“We have the potential for just the biggest boom for a period of time, assuming that we get to a place where people are comfortable leaving their house.”

For Christie’s, 2021 has seen spectacular confirmation of the potential to create wealth from the virtual world as it hosted a record-breaking $70 million digital artwork sale this month.

In an online auction held over 14 days, bids on the work by U.S. artist Beeple started at $100 and accelerated dramatically, with 22 million visitors tuning in for the final minutes of bidding.

Christie’s plans to follow up on the success with further sales of non-fungible tokens (NFTs), or artworks that exist only in digital form.