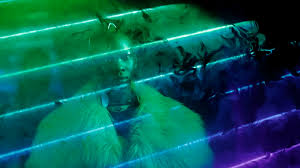 Psychedelic fashion speaks to our chaotic, confounding times, just as it did in the past. Ellie Violet Bramley explores the ‘magic-eye’ trend that echoes our lives.

The past year in fashion has seen a surge of chaotic, confounding prints that seem designed to confuse the eye. Resembling the psychedelic patterns of the 1960s and the Magic Eye Op-art phenomenon popular in the 90s – where abstract patterns revealed hidden shapes – this trend has ushered in a moment of what could be called “magic-eye dressing”. And just as in the 1960s, we are currently living through a time of upheaval and uncertainty. Could it be that this trend of mind-bending prints is echoing our own sense of confusion and chaos? Or maybe it is expressing a release from reality and a surge of hedonistic energy as we anticipate the joys of a still-hypothetical end to the pandemic.

Marine Serre is one of the most prescient designers of the moment. The face masks that made their way down her autumn/winter 2020 catwalk in Paris last February, just as the scale of the coronavirus threat was dawning on the world, felt like sartorial prophecy – although she had, in fact, been creating face masks for some time.

In the same collection, models wore numerous takes on houndstooth and other geometric prints, smashed and thrust together to create a patchwork of matching-mismatching prints that were chaotic and confusing. At Serre’s following collection, similarly mind-bending prints made their way on to bodycon dresses and bodysuits. As with much of the work of the French designer, the topsy-turvy aesthetic felt clairvoyant; a metaphor for our complicated and confusing times.

And Serre is not alone in meeting this moment with prints designed to confuse the eye. They have been enjoying a particular moment in the past year, rippling through the spring/summer 2021 collections of Christopher John Rogers, Ashish and Collina Strada, with many featuring mash-ups of wonky geometrics and dizzying swirls. For autumn/winter, big names such as Dolce & Gabbana and newcomers such as Fashion East’s Maximilian also went big on glitchy and confounding prints that resemble the op-art phenomenon popular in the 90s where abstract patterns revealed hidden shapes, ushering in the magic-eye moment.

These designs seem crafted to bewilder the viewer, whose eyes set about searching for reason and order amongst the disarray. When we look at prints, according to Amanda Briggs-Goode, head of department for fashion, textiles and knitwear design at Nottingham Trent University, “we look for pattern, we look for structure, we look to be able to make sense of something”. These prints deny us that – and that sense of confoundment feels apt for now.

In some cases, this lack of sense is symptomatic of a dawning hedonism and carefree spirit in terms of how we are getting dressed. As Dennis Nothdruft, head of exhibitions at the Fashion and Textile Museum in London, says: “There seems to be a movement to a much more free, less traditional approach”. He points, for instance, to the tie-dye boom that has seen many more of us this past year looking like Californian surfers who know our way around a point break. These psychedelic prints are a rebuke to the restrictions of lockdown, a time when baggy loungewear and elasticated waists have reigned supreme. For fashion psychologist Shakaila Forbes-Bell, they speak “to our collective desire for excitement and our need to venture beyond the confines of day-to-day life”.

Now, with an end to current lockdowns on the horizon in some parts of the world, even greater sartorial freedom is predicted, with talk of a “roaring 20s” in which every trip outside of the house is an excuse to dress to the nines. Tony Glenville, a fashion historian, sees optimism in these prints – as well as a defiance. “They’re linked to new beginnings, and also breaking down fashion rules… There’s a lot of chopping, slicing and rearranging going on, as though tradition must be rearranged.”

Tune in, turn on, drop out

By hankering back to the past with nostalgic references to the hippy fashions of the 60s and early 70s, they also speak volumes about the torrid times we find ourselves in. As Nothdruft, who is currently curating an exhibition called Beautiful People: The Boutique in 1960s Counterculture, which will explore many psychedelic designs, explains: “In the 1960s [psychedelic prints] could be read as an extension of the ‘tune in, turn on, drop out’ ethos of the times, a reaction to the status quo and I think a response to the optimism of the early 1960s”.

Collections such as Raf Simons’ spring/summer 2021 make these references explicit. The rippling patterns were part of a collection called Teenage Dreams – models’ T-shirts were emblazoned with “Children of the Revolution” and cloaks were decorated with whirlpools of lurid pinks and purples.

There seems to be a correlation between the use of alternative prints and patterns, and eras of change and unrest – Dennis Nothdruft

“Psychedelic fashion evokes nostalgic feelings of freedom, community, participation, memories of long summers, festivals and being close to the people we love,” explains Caroline Stevenson, head of cultural and historical studies at London College of Fashion. Given the seriousness of the past year, the isolation and boredom, she says it’s “no surprise that designers would look to revive these emotions, memories and desires. After being at home with nothing but our screens all year, we are craving live social and sensory experiences. We’ve missed the sense of participation in our environments, and feeling the tactile and visual presence of people around us… Dressing in clothing that was unrestricted and flowing, with bright colours and patterns was a way to visually eradicate social boundaries and enhance community participation”.

Then as now psychedelic drugs were in the spotlight. But while then they were very much an anti-establishment pastime, now they are increasingly being explored for their medicinal properties, with the UK’s first high-street clinic offering psychedelic-assisted therapy opening soon, and being incorporated into the wellness space – including Gwyneth Paltrow’s Goop.

Plus then, as now, the political and social climate was tumultuous. “There seems to be correlation between the use of alternative prints and patterns, and eras of change and unrest,” explains Nothdruft. Stevenson describes the context of the 1960s youth culture: “It was a moment marked by radical lifestyles, political protest and creative and cultural transformation.” This past year has seen upheaval, not only because of the pandemic, but also because of protests across the world, the eventful US election, and its shocking aftermath.

Darker prints communicate a post-apocalyptic energy, like Mad Max for the coronavirus generation

It is this charged moment that has also perhaps led to the other end of the magic-eye dressing spectrum, beyond signalling a desire for fun and the carefree. It might seem a reach to link textile design to the political and cultural moment but, according to Briggs-Goode, designers “pick up on culture, on politics, science” – she nods to Lucienne Day’s fabric design in the 1950s, inspired by the discovery of DNA – “you’re not going to look at her designs and think that looks like the scientific DNA image but they were visually connected to that and inspired by that. [Print designers are] looking and hiving from the culture around them”.

She points to the least structured of these hectic prints, the ones that abandon order, as speaking particularly to the chaos of the moment and the bleaker aspects of our times. “You have got that very fun end of it and that very flowing ‘I’m going to a festival’ – and we’ve just had lots of summer festivals announced – and then there’s the Barbarella type stuff… I think it’s on a spectrum.”

These darker kinds of prints, for instance in the work of the likes of Maximilian and Serre, are often head-to-toe on bodycon outfits that appear like second skins, and are regularly styled with masks, gloves or eye shields. For Briggs-Goode there is a clear reference to protection – almost a visual representation of our contagious times. They communicate a post-apocalyptic energy, like Mad Max for the coronavirus generation.

There’s a more practical rationale for these prints, too, particularly at a time when so much of our lives, fashion shows included, is taking place online. While the eye searches for patterns and repetition of print, by denying any such aesthetic catharsis designers are cleverly imploring you to keep looking. As Briggs-Goode explains: “people stop looking as soon as they recognise a pattern – there’s nothing else for your brain to process”. Forbes-Bell agrees: “I think designers might be turning to such overtly complex styles as a way to command attention for their pieces. Many studies have shown that people tend to consider a high degree of visual complexity… to be incredibly pleasant and stimulating”. These are prints that will cause viewers to pause while scrolling through Instagram or flicking through the wealth of digital collections.

But beyond merely making us look, they also make us feel, says Forbes-Bell: “The complexity bias can explain why consumers are so interested in visually dynamic prints… they are visually arousing and can stir a much-needed dose of excitement during this somewhat mundane period in our lives”. These magic-eye prints are offering a shot of caffeine – whether hedonistic and carefree or loaded with deeper political resonance and chaotic energy – in our uncertain times.