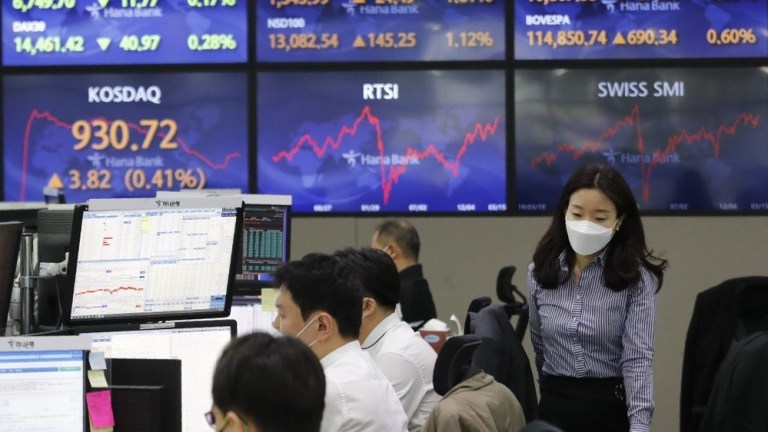 The slower rollouts of the coronavirus vaccine in Asia, compared to the U.S. and Europe, continues to put investors in the region in a cautionary mode, although South Korea, Taiwan, Japan and other nations have had fewer deaths.

Weighing on sentiment is news that the vaccine from AstraZeneca had had reports “blood clots after usage, whether or not a side-effect, (that) have resulted in a ‘precautionary’ suspension” in Europe,” said Venkateswaran Lavanya of Mizuho Bank in Singapore.

“This has setback Europe’s vaccination progress even more starkly compared to the U.S.,” Lavanya said in a report.

The news is also bad for Japan. Japan has started vaccinations of medical professionals with the product from Pfizer, but was set to use those from Moderna as well as AstraZeneca. The AstraZeneca vaccines were due to be produced in Japan, unlike the other two brands.

On Wall Street, the S&P 500 rose 0.7% to 3,368.94 after having been down 0.5% in early trading, extending its winning streak to a fifth day. Technology stocks, airlines, cruise operators and other companies that rely on consumer spending helped lift the market. Banks and energy stocks were the only laggards.

Wall Street continues to eye the bond market, where yields pulled back a bit from Friday’s sharp increase. Investors are also focused on the recovery of the U.S. and global economies from the coronavirus pandemic. The $1.9 trillion aid package for the U.S. economy has lifted investors’ confidence in a strong recovery from the pandemic in the second half of the year, but also raised concerns about a potential jump in inflation.

President Joe Biden’s pledge to expand vaccine eligibility to all Americans by May 1 should also translate into faster economic growth.

Some economists fear that inflation, which has been dormant over the past decade, could accelerate under the extra demand generated by a surge in government spending. Others disagree, pointing out that there are 9.5 million fewer jobs in the American economy than there were before the pandemic hit, and argue that unemployment will keep a lid on inflation.

United Airlines surged 8.3% for the biggest gain in the S&P 500, while American Airlines rose 7.7%. Delta Air Lines gained 2.3% and JetBlue Airways climbed 5.9%. The rally in airline stocks came as the Transportation Security Administration screened more than 1.3 million people both Friday and Sunday, the most since the coronavirus outbreak devastated travel a year ago.

In energy trading, benchmark U.S. crude lost 67 cents to $64.72 a barrel in electronic trading on the New York Mercantile Exchange. It lost 22 cents to $65.39 on Monday. Brent crude, the international standard, fell 72 cents to $68.16 a barrel.