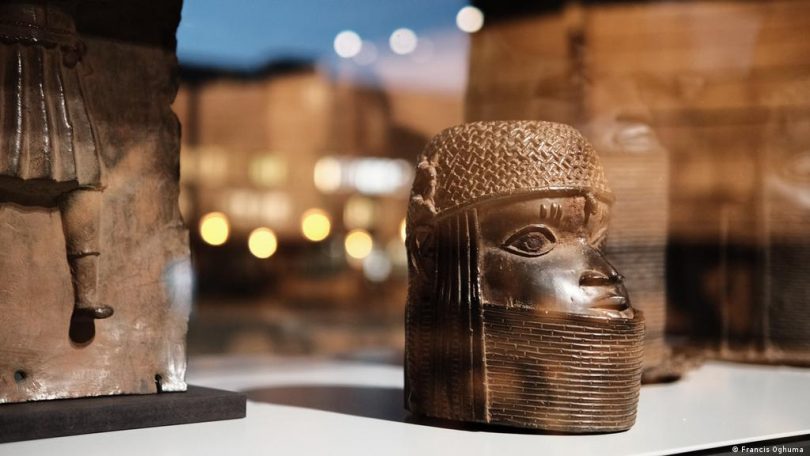 The debate about looted colonial art in German museums has gained new momentum. Foreign Minister Heiko Maas has taken a clear stand on the issue.

German Foreign Minister Heiko Maas has urged the restitution of African cultural items held by Germany in its public collections — especially the so-called Benin bronzes. Maas said this was a matter of honesty and justice. “An honest approach to colonial history also includes the question of the restitution of cultural assets,” he wrote on Twitter. “This is a question of justice,” he added.

To that end, the head of the Foreign Ministry’s cultural department, Andreas Görgen, visited Nigeria to determine whether German museums could cooperate with the planned Museum of West African Art in Benin City.

“We are part of a larger development in which we should help to create cultural infrastructure in countries from which we have objects in Germany,” he said.

The board of trustees for the museums and collections of the Prussian Cultural Heritage Foundation (SPK), which is responsible for Berlin’s new Humboldt Forum museum, also looked into the matter at a meeting this week.

German officials have been in touch with the cultural institutions in Nigeria and Benin City, as well as with the Benin Dialogue Group for some time, and insist that discussions are being held “on equal footing.”

Officially, the return of such objects is still only mentioned as an “option” on the foundation’s website, even though Monika Grütters, Germany’s minister of state for culture, expressly confirmed that the SPK is handling the issue with the required notion of sensitivity and “expertise in the interest of the greatest possible transparency.”

At a meeting with Germany’s state-level culture ministers in the near future, Grütters is likely to demand as a first step the complete digitization of disputed objects to make them accessible online to audiences worldwide.

A similar approach was taken concerning the Gurlitt collection, which brought Nazi looted art in German museums to global attention in 2013.

SPK president Hermann Parzinger has been commissioned to coordinate the efforts of museums and to develop a strategy in consultation with all ethnological museums and collections in Germany that feature Benin bronzes and other looted art objects in their collections.

Most of the famous bronzes, which include many busts of past rulers of the Kingdom of Benin, are in the collections of the Museum für Völkerkunde (ethnological museum) in Dresden, the Rautenstrauch-Joest Museum in Cologne, the Museum am Rothenbaum — Kulturen und Künste der Welt (MARKK, or museum on the Rothenbaum — cultures and arts of the world) in Hamburg, and the Ethnological Museum in Berlin, which belongs to the Prussian Cultural Heritage Foundation.

The SPK tweeted that returning the artworks was now “an option,” and Parzinger also made concessions to the art treasures’ countries of origin: “We are prepared to return objects,” he said in a recent TV interview with the German public broadcaster 3sat.

“We are in talks with Tanzania, and the foundation’s board has decided on objects from Namibia, where injustice has clearly been done,” he said.

When the Humboldt Forum finally opens its doors, the Benin bronzes are to be featured at the center of the museum’s ethnological collection, according to the SPK’s plans. In the fall of 2021, these art objects will move from their current location in the city’s Dahlem district to the new venue in Berlin-Mitte.

The bronzes originate from the Kingdom of Benin, a precolonial monarchy, whose capital was located in the southwest of the present-day state of Nigeria. The colonial power regarded the Benin Empire as too powerful and too independent, so the British forces looted its palaces and reduced everything else to rubble in a punitive expedition in 1897. The colonial rulers took all the art treasures and cultural assets they could carry with them — an estimated 4,000 objects that were then sold all over the world.

European museums then acquired the bronzes, mainly via auction houses and art dealers. To this day, leading museums in London, Paris and Berlin compete with the number of historical art treasures they can present to the public.

At least 80% of Africa’s cultural heritage is stored in European museums, according to experts, and for the most part, these objects languish in these institutions’ depots and storage rooms.

SPK president Parzinger says the rekindled debate offers new opportunities. In fact, he argued in the 3sat interview that in the light of current talks between art institutions in Africa and in Germany, the Benin bronzes must be shown in the Humboldt Forum when it opens in just a few months’ time:

“They have to be shown along with their complete history, the complete background,” he said.

The Humboldt Forum feels obligated to make its visitors aware of the historical colonial context, he said: “That is part of the concept. It’s very important that we don’t leave this topic out but that we seize on it in a self-critical manner. That’s the way forward.”