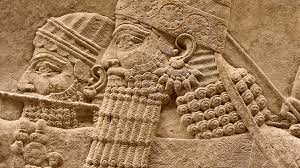 A single piece of jewellery reveals the true meaning of Assyrian reliefs from the 7th-Century BC. Kelly Grovier explores how images depicting a staged lion hunt were used to proclaim a king’s greatness.

f you want big answers, start small. Take, for example, the sprawling sculpted slabs of ancient alabaster known as the Lion Hunt of Ashurbanipal. At first glance, the 7th-Century BC gypsum panels, which once adorned the walls of a royal palace in Nineveh, Upper Mesopotamia, are a confusing chaos of arrows splitting muscle. But beyond the surface narrative of majestic might conveyed by the exquisite sculptures, which portray the Assyrian King Ashurbanipal (now on horseback, now in a chariot) proudly slaughtering pride after pride of snarling lions, it might be difficult for any casual observer of the bas reliefs to discern any larger aesthetic or spiritual message from this brutal ballet of poised spears and frozen roars.

What’s it all about? It’s certainly not what it at first purports to be, a celebration of the king’s success in defeating an onslaught of lions in the wild. (A pair of panels revealing the carefully choreographed release of the creatures from cages puts paid to that propaganda, hinting that the reliefs are an archaic form of fake news.) Though there is little doubting the ferocious finesse of the forgotten artist responsible for this miracle of chisel and sweat, what our eyes long for is a hook or aperture amid the leonine bloodbath through which to glimpse the work’s deeper meanings.

And then you see it, dangling conspicuously just below the ear of the king himself in one of the work’s most dramatic scenes: a garish trinket as transfixing in its suggestive potential as the overblown gem that hovers beside the porcelain cheek of Johannes Vermeer’s Girl with a Pearl Earring – that single decisive detail that unlocks the secret symbolism of this overpowering masterpiece. The ancient artist who designed the lion hunt reliefs has taken great care to articulate the shape and texture of the oversized earring that hangs from Ashurbanipal’s left lobe in what historians call The Arrow Scene (one of four principal sculpted episodes that include The Lance Scene, The Dagger Scene and The Preparation Scene). The piece of jewellery is so sharp and palpable in its sculptural description, one senses that the king might well, at any moment, drop his bow altogether, rip the earring loose, and fling it like a makeshift Ninja weapon at his feline foes.

In a scene of fierce and formidable action – of taut reins, raining arrows, and slanting spears – this seemingly innocuous decoration unexpectedly holds its own and manages to command our attention. Far from incidental, the arresting piece of jewellery, which bursts from the borders of itself with piercing radiance like a celestial orb, transforms the static action from a callous chronicle of recurring cruelty, however impeccably wrought, to something more sympathetically mythic: a meditation on the interconnectedness of all things. To understand how that object functions, we must first remind ourselves of the surface contours of the alabaster reliefs and the pioneering achievement of the anonymous craftsman who created them more than two millennia ago.

Were it not for a sustained stretch of soggy weather in Mesopotamia in the middle of the 7th Century BC, these captivating carvings might never have come about. Good for animal and vegetable alike, the irriguous conditions allowed lions to flourish in the lush hills that surround what was the city of Nineveh, the epicentre of Assyrian civilisation and culture. As the lions grew exponentially in number, their fearsome roar became an aspect of daily life. So too did their appetite. Livestock and the farmers who raised it were increasingly the target of the lions’ hunger and aggression. “Corpses of men, cattle, and sheep,” according to contemporary records, “lie in heaps as if the plague had killed them. Shepherds and herdsmen lament at what the lions had done. The villages are in mourning day and night.”

So great was the threat to tranquillity that the lions posed, one of the chief responsibilities of Assyrian kings was to deal with the menace. To judge from the design of the Assyrian royal seal, which depicts the king in hand-to-claw combat with an erect lion, royal authority rose and fell in direct proportion to the king’s ability to tackle the problem. Thus began the brutal pomp of the royal lion hunt and the emerging myth of the Assyrian king as vanquisher of the beasts.

An artist was commissioned to create reliefs that not merely chronicle the perennial campaigns to quell the lion scourge, but exalt the struggle

When a new residence was built for the latest occupant of the Assyrian throne, King Ashurbanipal, who reigned from 699 to 631BC, an artist was commissioned to decorate the walls of the North Palace with reliefs that not merely chronicle the perennial campaigns to quell the lion scourge, but exalt the struggle. Taking 10 years to complete, the result was a tour de force of aesthetic innovation that would be lost to cultural history almost as quickly as it was finished.

Less than two decades after the work was completed in 635BC, Nineveh was sacked in 612BC by a coalition of former vassals that included Babylonians and Chaldeans, Persians and Scythians, burying the artistic treasure under rubble for 2000 years. Rediscovery of the forgotten reliefs was the remarkable achievement of a 19th-Century Iraqi Assyriologist, Hormuzd Rassam, who, between 1852 and 1854, oversaw their excavation and helped arrange their relocation to the British Museum, where they have been on display ever since. (The recent decision by the University of Aberdeen to return a Benin Bronze to Nigeria has put pressure on other British institutions that house colonially displaced treasures to send these objects back to the regions of their birth.) Occupying a gallery of their own that can be sauntered through on Google Maps at one’s own pace (and at any hour), the fragmented panels are impossible to stroll (or scroll) past with indifference.

It’s the arrows that strike you first. Now suspended in timeless sculpted air; now piercing the acrobatic eye of its untamed targets; now stony still, feathers to bowstring, pinched between the focused fingers of the king, the arrows propel the frozen action of the visual narrative forward. Like needles stitching together time, the suspended shafts exist simultaneously in the past, the present, and the future. They provide a storytelling logic to the king’s continual reappearance in scene after scene.

It was precisely this sense of stop-motion splicing that caught the imagination of the 20th-Century American poet William Carlos Williams when he encountered the reliefs as a young man in the early 1920s. “See! Ashur-ban-i-pal”, Williams writes in an early poem, cleverly echoing the flurry of flying and falling arrows that punctuate the reliefs with an excess of hyphens, dashes, and exclamation points, “the archer-king on horse-back… with drawn bow – facing lions/standing on their hind legs,/fangs bared! his shafts/bristling in their necks!”

Williams captures the fantastical quality of the reliefs, how they portray an eternal instant when an arrow is at once yet-to-be-unleashed (“with drawn bow”) while at the same time forever striking its target (“bristling in their necks!”). Here, time collapses. So too, in a sense, does the enmity between the slayer and the slain. It’s almost as if the king and the lions he perpetually quells – antagonists who are depicted by the ancient sculptor with at least as much heroism and sympathy as the august protagonist of the hunt – occupy a realm outside of the here-and-now (or there-and-then) and are, in essence, less mortal adversaries than spiritual reflexes of each other, pulsations of the same mythic heart.

This is where the significance of Ashurbanipal’s radiant earring reveals itself and becomes a crucial puzzle piece not merely in comprehending the complex relationship between these two complementary forces, the hunter and hunted, but in rescuing Ashurbanipal himself from eternal futility. After all, if the king is truly as mighty as the alabaster reliefs suggest, why do the lions keep coming back, panel after panel, year after year, reign after reign? The sculptor who conceived the aesthetic strategy for the carvings, in other words, faced a monumental conundrum in explaining how it is that an all-powerful ruler is incapable of defeating his foe once and for all – a dilemma that the earring, and it alone in the iconography of the works, helps him overcome.

A symbol of lion and king

At first glance, the piece of jewellery appears to be little more than a deceptively simple solar symbol blossoming with barbed flares, an ornament accenting the king’s incontestable brilliance. Look closer, and the beaming petals that shoot pointedly from the earring’s centre echoes not just the sharpened arrowheads on which the king’s power is conditioned but also the claws and teeth that threaten to overwhelm him. The earring is a kind of compound emblem, one that absorbs into itself the eternity of the refulgent sun, the invincibility of the king, and the formidableness of the forces that he and he alone is powerful enough to keep at bay.

There is every reason to suspect that contemporary observers of the gypsum reliefs would have recognised immediately the earring’s double entendre – its reference both to the weaponry of the hunt and that of its ferocious target. In Mesopotamian mythologies of the era, the sun was synonymous with the archer god Ashur, from whom the king’s very name derives. Surviving stone medallions that predate the Lion Hunt panels portray a winged Ashur, bow in hand, encircled by and enthroned in the sun. Blurring into this connection between the sun and the archer and complicating it is an age-old association too between the sun and the lion, a link that dates back to the very inception of astrological signs millennia before Ashurbanipal’s reign. “The ancient connection of the sun god with the lion,” according to the folklorist Alexander Krappe, who was the first to translate the collected tales of the Brothers Grimm, “is reflected in the lore of the zodiac, unquestionably of Mesopotamian origin”. The sun is read in arrows and claws.

Seen through the lens of the multivalent earring, the alabaster Lion Hunt is more than merely a chronicle of a single campaign to cull a persistent pest. It is the stuff of timeless myth, turning a failure to entirely defeat the lions into a glorious victory. Suddenly, easily overlooked flourishes introduced by the ancient sculptor into his masterpiece begin to make sense: the elegant little lion head whittled into the tip of Ashurbanipal’s bow; the leonine armlets that clench the muscles of his attendants. The hunter and hunted define each other; they are coeternal cogs in the endless engine of existence. To exalt the king, the lion too must be apotheosised. However brutal the beastly battle between them, life itself relies on the struggle. The reliefs are making it clear that the king and the lion are one.