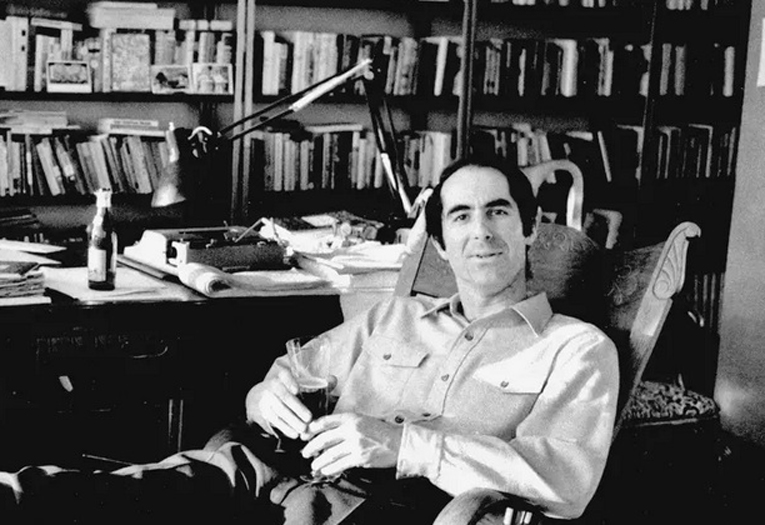 In response to that staple biographer’s question, “when were you happiest?”, Philip Roth tended to think of his first year as a graduate student at the University of Chicago, when he was free to pursue his persistent “Byronic dream” of “bibliography by day, women by night”. In the six decades that followed, as Blake Bailey’s compulsively readable life of the novelist reveals, this idealised schedule was generally compromised one way or another, to Roth’s frequent frustration and sometime derangement. In Chicago and subsequently during his two-year national service beginning at Fort Dix, he had regular visits from his first obsessive lover, Maxine Groffsky, and he reminisced fondly to Bailey how on meeting, they would always tear each other’s clothes off at the door. “I haven’t done that in a while,” Roth mused, aged 79. “I take them off nicely, I hang them up, I get into bed and I read. And I enjoy it as much as I enjoyed tearing the clothes off.” That late-life liberation from desire is 900 pages in the making.

The two great and lasting traumas of Roth’s life were his marriages. He came to believe he had been trapped into both of them. First by Margaret Martinson, a waitress five years his senior, whom he had initially seduced as a “test” to see if he could charm a “shiksa blonde” and who Bailey later describes, through Roth’s eyes, as “a bitter, impoverished, sexually undesirable divorcee”. Martinson tricked him into a terrible union with false claims that she was pregnant, backed up with a sample of urine bought for $3 from an expectant mother in a homeless shelter, and threats of suicide if Roth should ever leave her. The second perceived “entrapment” was with the actor Claire Bloom, with whom Roth spent nearly 20 years from 1975, years that she documented in her brutally critical memoir of his role in their drama, Leaving a Doll’s House.

The liberations from these tortured relationships propelled the two great breakthroughs of Roth’s writing career. Portnoy’s Complaint was completed immediately after Martinson, from whom he was long divorced but never free, died in a car crash. His scandalously funny book – the most literal of all “coming of age” fiction – became the biggest-selling novel in the history of his publisher, Random House. It made Roth a pariah within the conservative Jewish community, and a very wealthy man.

His fictional selves often showed Roth in the worst possible light. ‘Why not?’ he asked. ‘Literature is not a moral beauty contest’

His second great literary advance coincided with recovery from the breakdown he experienced before his split from Bloom (having contemplated suicide, he was admitted to a psychiatric hospital aged 60; when Bloom visited him, she was sedated and given a bed, too). The subsequent release expressed itself first in the extraordinary priapic howl of Sabbath’s Theater in 1995, and then in the peerless trilogy of novels beginning with American Pastoral which won Roth every award going – apart from the Nobel prize that he deserved and coveted (for years, a large part of the annual “fun in Stockholm”, Bailey suggests, seemed to consist of snubbing Roth).

In between times, through much of his midlife career, his principal fictional subject was himself, as he tried different alter egos on for size. In many ways, as Bailey’s book argues, there should be no surprise in this self-absorption, since Roth contained brilliantly conflicted multitudes. There was a capacity for great kindness to friends and family, but also spectacular selfishness in pursuit of his art; he could be the best company and the worst (“I know that I am a holy terror to live with if I haven’t been writing steadily”). He was rooted in the small-town values in the Newark of his youth, and had no compunction in wickedly dismantling them (to his father’s dismay he renounced Judasim the day after his bar mitzvah, subsequently declaring his faith to be “polyamorous humorist”). Bailey notes that his fictional selves, Nathan Zuckerman and the rest, often showed Roth in the worst possible light. “Why not?” Roth asked. “Literature is not a moral beauty contest.”

If he was in thrall to his libido, he was also chained to the thrumming necessities of fulfilling his gifts as a writer. Roth described the perpetual “overcommitment” of writing fiction as an intensity that “kills you and makes you all at once”. Near death, Bailey observes, the author would lie in bed at night and try to remember every person he had known and “out of ancient habit” begin to rise to write about them before recalling with relief that he wasn’t “slavishly hearkening, day or night, to the demands of his talent any more”.

Bailey was recommended to Roth as a biographer by his sharp and empathic book about that other self-destructive truth-teller, John Cheever. “I don’t want you to rehabilitate me,” Roth told him. “Just make me interesting.” Bailey duly gives illuminating depth and context to what Roth liked to present as “the facts” of his “life as a man” while reserving moral judgment. He is guilty at times, perhaps, of taking the grand male passions described by Roth a little too much in earnest. While Roth is allowed his adolescent infatuations and changes of heart, his jilted lovers and their capsized lives are sometimes implicitly dismissed as dull or hysterical. One alcoholic and suicidal young lover, “Sylvia”, intrigues Roth as a “cultural primitive”; innumerable other liaisons allowed him to indulge My Fair Lady fantasies of education with benefits. His 18-year affair with Inga Larsen (not her real name) – the model for the object of Mickey Sabbath’s lust in Sabbath’s Theater – ended when she divorced her husband and moved in with him. “She’s a great adultress, but not a great mate,” Roth noted in a letter. “The same was arguably true of Roth,” Bailey suggests (that “arguably” is one of the few redundant words in his beautifully written book).

It was one of the curiosities (and perhaps sadnesses) of Roth’s life – not least because of the amount of urgent sex that he crammed in between his 31 books – that he did not have children of his own. Toward the end of his life, he formed a deep sentimental attachment to the young twins of one former lover, Julia Golier, who became his co-executor. His last recorded words here are to Golier at his hospital bedside, “I loved your kiddos,” Roth said, “they were the joy of my life.” He left them a significant legacy in his will. A lot of the rest went to the local public library in Newark, where he first began to conjure a question that never left him: “What made me the writer?” It is hard to imagine a book that will come up with a more definitive series of answers than this one.