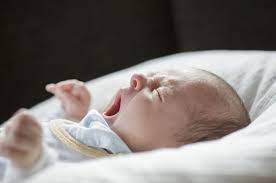 ISTANBUL (Dailysabah): Spring has sprung! All over the world, the season of spring is very much correlated with the harvest of pastures, the arrival of storks and the birth of new babies. All over the world, spring is the time when most babies are born and conceived during the months upon us. Thus, this is an opportune time to revisit some of Turkey’s most prominent superstitions when it comes to pregnancy, childbirth and baby-rearing as they are quite fascinating as many an expat mother in Turkey will know.

Forty is a significant number in Turkey and while its importance can also be correlated with Muslim beliefs, the history of the meaningful figure spans back to even before the birth of Islam for the Turks. While there are a number of customs associated with the number 40, perhaps the most significant involves the birth of a child. A steadfast tradition in Turkey is for a baby and its mother to lay low for the first 40 days of a child’s life. In fact, it used to be that a mother and her baby would quite literally shut themselves off in a room or area of the house and would only socialize with a handful of people for the 40 days following birth. While these days the custom is a little bit more relaxed, you would be hard-pressed to find a mother and her newborn out and about before the passing of 40 days.

Whether the belief is that the child may be victim to the ill wishes of “cin,” also commonly know as jinns (or Turkey’s good and evil fairies from a western point of view), or could be subject to the malevolent “evil eye,” either way, it isn’t until 40 days have passed that a special prayer is read for the child and some sort of offering made to close ones, relatives and neighbors in the form of a “hayır,” a charitable expression of gratitude to the greater powers.

A newborn will also always be adorned with an “evil eye,” the blue glass beads with eyes painted on them, and it is usually attached to the baby’s clothes with a small safety pin. This is done to ward off any ill wishes or envious looks from others. If you come across a newborn, it is well-advised to say “maşallah,” which can best be described as “Praise be! (to the higher spirit),” and repeatedly at that and trust me, it will be well appreciated. Also, don’t be surprised if you hear someone calling a baby “ugly” in Turkey as that is believed to ward off any jealousy and thus the “evil eye.”

To swaddle or not to swaddle

Many an expat mother in Turkey will attest to the trials and tribulations surrounding the Turkish belief that swaddling a baby is the only way to rear one correctly. Foreign mothers in the country who may not adhere to the practice can even literally be stopped on the street and scorned by their Turkish counterparts whose beliefs are steadfast that swaddling a baby is the best and quite frankly the only way to go. While this is an older custom that is admittedly losing traction in younger generations, the belief behind the practice is that if you wrap a child’s legs and arms out straight it will help them to grow in the same fashion, i.e. slim and tall. The Turks also believe that swaddling leads to better muscle and nerve development and that the practice ensures babies sleep longer and deeper and thus wake less in the night. The tradition is a bit controversial however as recent findings can challenge the belief that swaddling is the best practice for babies and even go so far as to state that wrapping a baby up tightly can lead to hip dysplasia, overheating and even a vitamin D deficiency, among other things.

Baby steps… or the steps to take for babies

There is also a steadfast belief in Turkey that if you jump over a child, that child will remain short for the remainder of their lives. If one does happen to mistakenly jump over a child in Turkey, they will then painstakingly attempt to back step the event by walking back over the child in order to reverse any misactions they may have caused by overstepping the child in the first place. Yet another bizarre belief in relation to a child’s height is that should you measure a child’s length you will have then caused that child to be short forever. Yet another bizarre belief is that if you cut a baby’s nails within their first 40 days of life, then they may be destined to become a thief!

In an even scarier twist of fate, there has been a historical superstition in Turkey that is now strongly advised against and that is washing a baby in saltwater. The belief behind the practice is that it will prevent the child’s perspiration from ever smelling, however, recent findings have shown that the practice can be extremely dangerous and lead to dehydration, skin rashes or ailments that are much worse, making this a superstition best left on the wayside.

Yet another intriguing superstition is one involving placing a turtle shell under the pillow of a child for them to become strong and beneficial people to society. The turtle is considered quite a virtuous animal for Turks and its shells can serve as good luck charms.

Unsurprisingly, there are also a number of superstitions surrounding the period of pregnancy ranging from predicting a baby’s sex to ensuring a child has dimples. That’s right, if a pregnant women’s belly is pointed and/or if they crave sweets, then it is believed the baby born will be a boy. Similarly, if the carrying mother has a rounded belly and craves sour flavors, then it is said the baby born will be a girl. There is also an interesting superstition surrounding the umbilical cord, such as if the cord is kept in a chest or cupboard in the home, then that means the child will end staying at or close to home. Similarly, if the umbilical cord is buried in a school garden, then superstition states that child will grow up to be educated, while if the umbilical cord is buried in a mosque’s garden, then that child is believed to become pious and thus, especially devoted to religion.

A personal favorite is the practice of a pregnant woman placing an egg in a belt or sash as it is believed that if done right, the baby will have dimples.