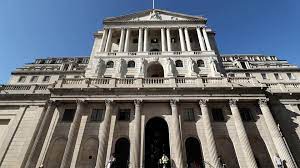 LONDON (AFP/APP): The Bank of England is set to hike its economic growth forecasts Thursday as the UK gradually exits lockdown restrictions thanks to the country’s rollout of Covid-19 vaccines.

It comes as the BoE is widely expected to leave its key interest rate at a record-low 0.1 percent and maintain its stimulus programme pumping vast sums around the economy.

“It looks highly likely that the Bank of England will significantly revise up its GDP growth forecast for the UK economy in 2021… and improve its unemployment projections,” noted EY economist Howard Archer.

At the same time investors are concerned that the reopening of economies and huge government stimulus programmes worldwide will hike inflation, risking higher interest rates down the line.

But despite Britain’s annual inflation rate accelerating to 0.7 percent in March partly owing to rebounding oil prices, it remains far below the BoE’s 2.0-percent target.
“Although Consumer Prices Index and wage inflation have remained relatively soft, input costs are nonetheless rising as the increases in prices of raw materials are exacerbated by a strengthening pound,” said Fawad Razaqzada, analyst at ThinkMarkets.

While Thursday’s announcements by the central bank could impact sterling, key local elections in Britain the same day — and notably in Scotland — are likely to play their part.

The votes across Britain are the first since the coronavirus outbreak and after Brexit took full effect.

And they are the first electoral tests for Prime Minister Boris Johnson against Keir Starmer since the latter’s election as main opposition Labour party leader last year.
Johnson’s Conservative government has spent £352 billion in emergency measures since the outbreak of Covid-19, particularly for a furlough scheme that has paid the bulk of private sector wages for millions of workers across the UK.

The state’s emergency pandemic support measures have sent UK annual borrowing rocketing to the highest level since WWII. As the pandemic erupted in March 2020, the BoE slashed its key interest rate to a record-low 0.1%, where it has remained.