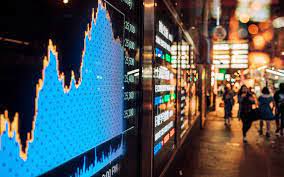 HONG KONG (AFP/ APP): Most markets in Asia and Europe rose Thursday as investors welcomed a strong jobs report from the United States that reinforced optimism that the world’s top economy is well on the recovery track, though inflation concerns continue to dog trading floors.

The White House’s support for a global waiver on patent protections for Covid-19 vaccines also provided some cheer as it lifted hope for a speedier recovery in poorer nations that have struggled to access the jabs.

US private firms added 742,000 jobs in April, payrolls firm ADP said Wednesday, marking a fourth straight monthly gain, with much of them in the crucial services sector, which was hardest hit by virus lockdowns and other restrictions last year.
The reading, while slightly short of forecasts, confirmed that the battle against unemployment is being won, and analysts said the improvement was expected to continue as the reopening continues.

It also bodes well for Friday’s closely watched government data, which provides a snapshot of the state of the economy.

But there is a growing fear that the expected burst of economic activity this year caused by pent-up consumers returning to stores and restaurants — with government cash in their pockets — will send inflation rocketing and force the Federal Reserve to tighten its ultra-loose monetary policy.

And traders are struggling to take heart from reassurances from top Fed officials, who have repeatedly said the bank will stick to its guns until it has unemployment tamed and inflation is running consistently hot.

Tokyo rose 1.8 percent as traders returned to work for the first time since Friday, while there were also gains in Hong Kong, Singapore, Seoul, Mumbai and Bangkok.
Shanghai dropped as dealers there also came back after a three-day holiday, while Sydney, Wellington, Manila and Jakarta also fell.

London, Frankfurt and Paris were all well up in early business.
The gains followed a strong lead from Europe, where London hit a more than 14-month high and strong eurozone growth figures also sent Paris and Frankfurt surging.

The Dow and S&P 500 edged up but the Nasdaq fell again owing to further weakness in the tech sector.

Investors welcomed comments from US Trade Representative Katherine Tai, who said the Biden administration “supports the waiver of those protections for Covid-19 vaccines” in order to end the pandemic, which has killed more than three million and battered the global economy.

Better access for more countries to the shots would help them to reopen their economies sooner and help the global recovery effort.

Oil prices inched up, supported by demand optimism as vaccines are rolled out and economies reopen, though fears about the record spike in infections and deaths in major consumer India has kept a lid on further gains.
Brent is sitting close to levels not seen since January last year before the pandemic took a grip on the planet.