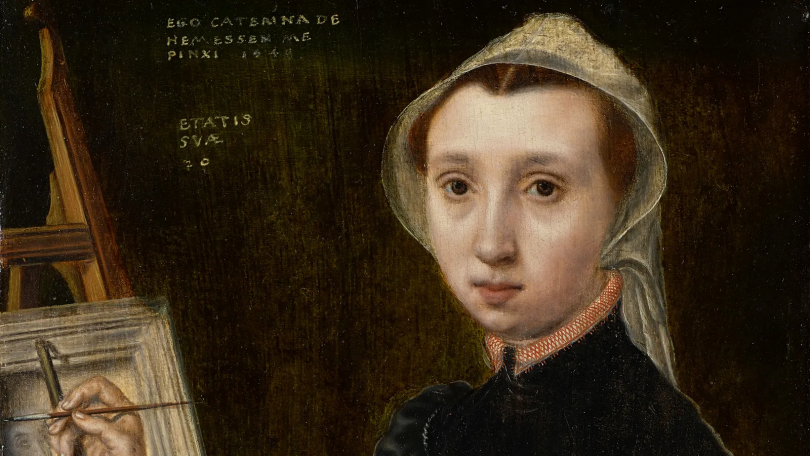 Think “creative genius” and a parade of self-portraits from the history of art, each brooding intensely before an unfinished canvas, flashes across your mind. You know the ones: from the rumpled nobility of Rembrandt’s Self-Portrait with Two Circles (1665) to the smouldering introspection of Vincent van Gogh’s iconic Self-Portrait as a Painter (1886), from the bashful gaze of Francisco Goya’s Self-Portrait in a Studio (1790) to the circumspect squint of Paul Gauguin’s Self-Portrait with a Palette (1894). So masculine is the stereotype of the aloof artist, lifting his paintbrush like an existential barbell freighted with psychological weight, it is almost unimaginable that the tradition should have begun with a corseted 20-year-old young woman, whose contribution to cultural history and to shaping our modern idea of the artistic temperament – trapped in a prism of preoccupied thought – has gone largely unappreciated for nearly half a millennium.

There is every reason to conclude, as art historians have, that an absorbing self-portrait by a gifted young Flemish Renaissance painter by the name of Caterina van Hemessen, painted in 1548, is likely the first self-portrayal of an artist, male or female, at work at the easel. Such attributions are a risky business, of course. Just ask the endless succession of nominees for inventor of abstract painting (now Kandinsky, now Hilma af Klint, now JMW Turner…). There’s always a chance that an earlier example, unfairly forgotten by time, will come to light.

But in the case of Hemessen’s transfixing masterpiece, it isn’t simply the posture – the young woman depicting herself in meta-mid-brushstroke as she sets out to create the very same painting that we see before us – that distinguishes the work as one of the most pioneering in the history of image-making. The depth and complexity of the small, oil-on-oak panel’s reflection on the very nature of creativity and self-invention is incontestably ground-breaking and changed forever the way artists presented themselves to the world. 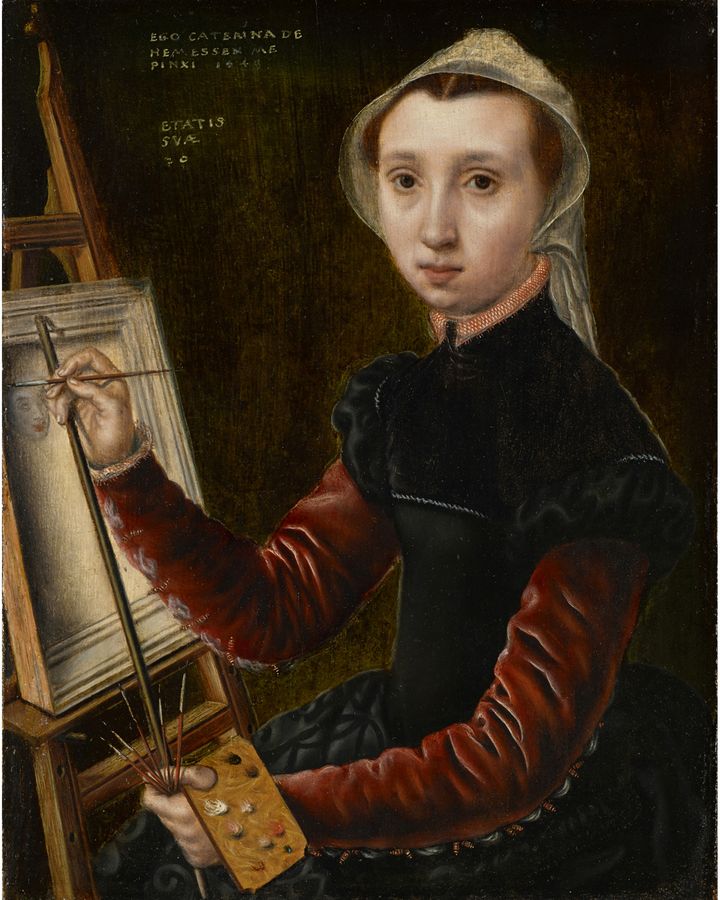 Hemessen’s painting is one of the most pioneering in the history of image-making (Credit: Getty Images)

At first glance, it’s the slightly unsettling, unrequited stare of the prim sitter, gazing past us to a mirror that sits somewhere outside the frame, that piques our attention. That her plush velvet sleeves are at odds with the grubby task at hand – smudging pigment and oil on a sloppy palette – adds to the curious sense of staging.

It isn’t long before our eyes are pulled deeper into the painting’s mystery by the teasing inscription that Hemessen has inserted. In the murky void between the larger likeness of herself that dominates the right half of the image and the smaller self-portrait that the painter-within-the-painting has begun to create on the primed oak panel that rests on the easel on the left, it reads: “Ego Caterina de Hemessen me pinxi 1548 Etatis suae 20” (or “I, Caterina of the Hemessens, painted me in 1548 at the age of 20”.) 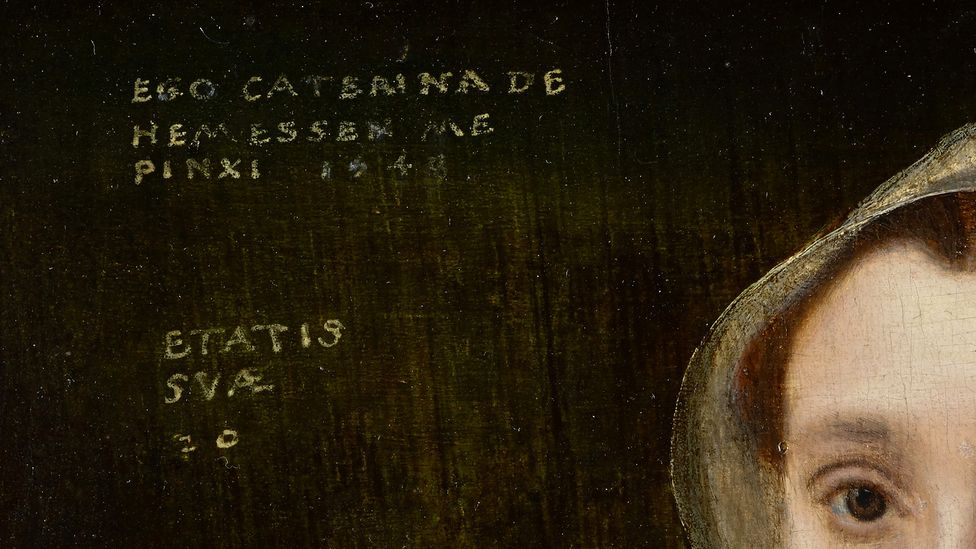 Though it was customary for portraitists to inscribe their works with captions identifying their sitters, in this instance, the language is anything but clarifying in its function and serves ingeniously to intensify the panel’s visual verve with a level of semantic, psychological, and philosophical intrigue. Who, after all, is speaking these wafting, weightless words? Are we to imagine that they are being breathed ghostily down the centuries from the departed lips of the artist herself – a gifted stylist who, in an era when few female artists made much headway, so distinguished herself that the queen consort of Hungary and Bohemia, Mary of Austria, retained her services? Or is this declaration, “I Caterina…”, the ventriloquised whisper from the motionless mouth of the artist’s alter ego in the painting – a silent semblance of self whose absent eyes stare out assertively but refuse to meet ours? Or does the “me” in “I … painted me” attach instead to that ever-emerging almost-self on the panel-within-the-panel who is, if we follow the logic of the painting’s depiction to its conclusion, the eventual, irreducible “me” that will ultimately be created? Hemessen’s portrait presumes the existence of three distinct selves, refracted like a ray of white light in a prism into the bright spectrum of the painter, the painted, and the yet-to-be-painted – a trio locked forever in a spinning phantasmagoria of identity.

A collision of identities

There can be little doubting that Hemessen deliberately hinged so much of the work’s intensity on the impenetrable poetry of her riddling inscription. Trained by her father, Jan Sanders van Hemessen, a leading figure of the Romanist School (16th-Century Low Country artists who’d travelled to Rome) in the Flemish Renaissance, she knew her art history well. The patterning of the language of her floating caption was an unambiguous allusion to what is still, to this day, one of the most arresting self-portraits ever made: Albrecht Dürer’s Self-Portrait at Twenty-Eight (1500). 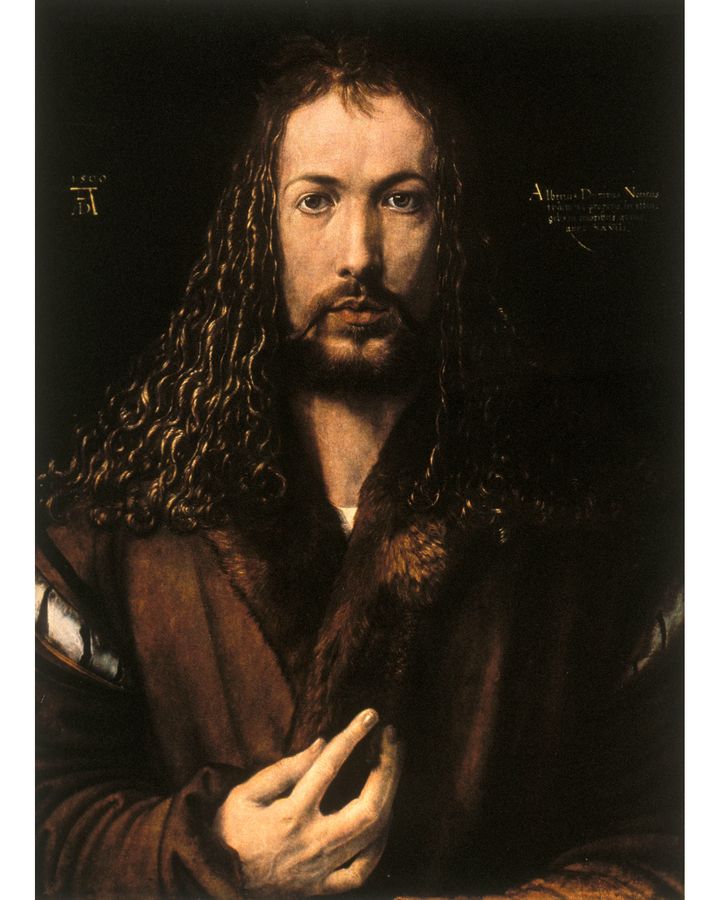 Created half a century before Hemessen’s, Dürer’s painting likewise positions its integral Latin inscription at eye-level: “Albertus Durerus Noricus ipſum me propriis ſic effingebam coloribus ætatis anno XXVIII” (or, “I, Albrecht Dürer of Nuremberg portrayed myself in everlasting colours aged twenty-eight years”). It has widely been acknowledged by scholars that Dürer’s own Self-Portrait is itself a daring collision of identities as the German Renaissance master boldly blurs his likeness into that of countless depictions of the risen Christ, eyes polished into an eternal gaze, raising his hand with otherworldly authority to divvy up souls on Judgement Day. 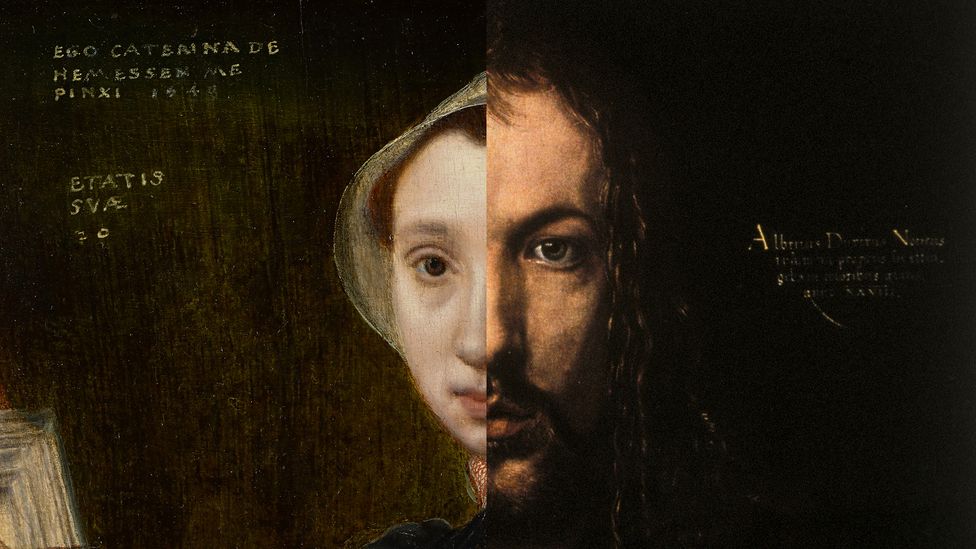 As with Dürer’s image, Hemessen collated her identity with that of Christ (Credit: Getty Images)

By alluding audaciously to Dürer’s celebrated self-portrait, Hemessen isn’t merely projecting confidence in her own skill or proclaiming inflated artistic ambition. She is doing something much more outrageous: inviting us subliminally to perceive her very existence as spiritually contiguous with that of Christ, the Saviour. If you have any doubt about that astonishing intention, look again at the barely begun painting-within-a-painting that sits on the easel before her, just below those inserted words. 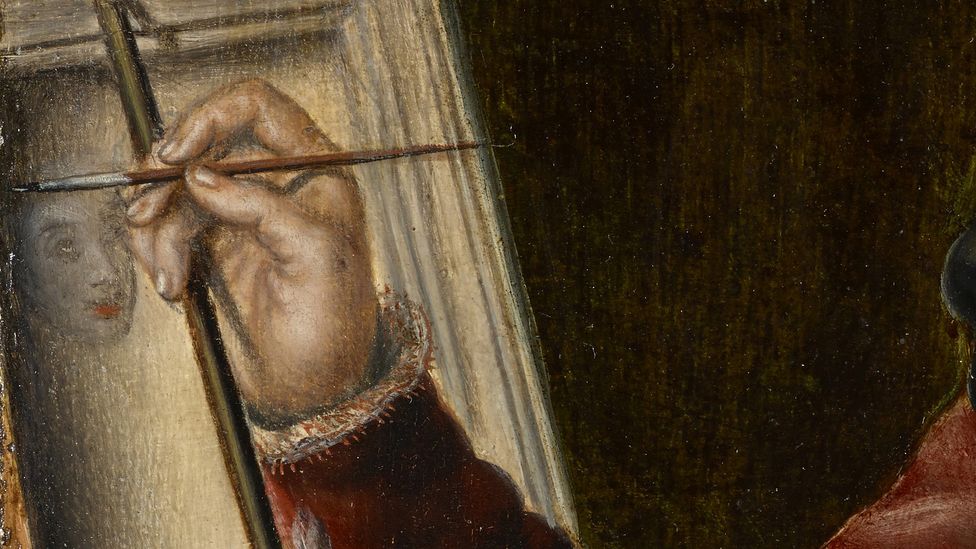 The position of the paintbrush has its own significance (Credit: Getty Images)

The paintbrush that Hemessen is holding horizontally with her right hand and the vertical maulstick (a painter’s prop used to steady an artist’s arm) that leans upright against the panel, nudged in place by her palette-gripped left hand, are carefully positioned to form an unmistakable cross. Against the fledgling self-portrait that she has started to describe on the white panel, this superimposed cross becomes an insinuated crucifix thrust upon the emerging image of the artist. Hemessen appears to be asserting that her vision and her craft at once redeem and torture her – a sentiment that would have far-reaching implications for how future generations of artists perceived their own condition.

The intriguing sense of artistic and spiritual mirroring activated by the self-portrait – of Hemessen merging her identity now with Dürer, now with Christ – is magnified by a mystery of actual optical mirroring that hangs over any perception of this perplexing painting. To appreciate any self-portrait is to presume the existence of a looking glass used by the artist and positioned somewhere outside the painting’s frame – a materially reflective surface that makes possible the image the painter is creating.

By playfully entangling herself (and us) in a mind-bending puzzle of mirrors, Hemessen has created more than a rollicking retinal riddle

But in Hemessen’s reflection, something doesn’t add up. In the painting we have before us, the artist’s head is in the top right of the panel, whereas in the panel on the easel, the painting within the painting, the fragment head is in the top left. It is as if Hemessen has cleverly corrected the optical inversion of the image of herself that the mirror she is looking into, outside the frame, has created. As a result, it is the barely begun and fragmentary self-portrait-within-the-self-portrait that is truer to life than the finished painting we see before us.

By playfully entangling herself (and us) in a mind-bending puzzle of mirrors, Hemessen has created more than a rollicking retinal riddle. She has produced a profound visual treatise on the very nature and substance of spiritual and physical imitation – a topic at the centre of contemporary religious thought. A century before Hemessen painted her self-portrait, the late Medieval Dutch-German theologian Thomas à Kempis published his influential Christian devotional book The Imitation of Christ, a guide to spiritual life that seizes upon the prop of the mirror to emphasise the importance of reflecting the holiness of the universe. “If your heart were right,” à Kempis writes in the book’s fourth chapter, “then every created thing would be a mirror of life for you and a book of holy teaching, for there is no creature so small and worthless that it does not show forth the goodness of God.” A mirror is never just a mirror. In Hemessen’s day, it was a crucible of virtue, a sounding board of salvation.

What keeps our eyes transfixed is the hope that perhaps some element of ourselves can survive the fleeting dabs and strokes of our moments in time, can survive as an energy that echoes across ages

Amplifying the significance of the mirror in the imagination of the time, and of even deeper resonance to Hemessen’s work, are the writings of the 14th-Century Italian mystic, St Catherine of Siena, whose teachings had been in popular circulation in Europe since the beginning of the 16th Century. As if presciently sanctioning the visual verve of Hemessen’s painting, in which the artist dares to see herself not merely performing a function typically assigned to men (painting), but assuming aspects of the male Christ, Catherine of Siena challenged the notion that women were not equally summoned to see themselves as mirrors of Christ. Marshalling the metaphor of the looking glass, she asserts that Christ is “a mirrour that needis I moste biholde, in the which myrrour is representid to me that I am thin ymage & creature”.

Caught in a crossfire of ricocheting reflections – religious and feminist, optical and artistic –  Hemessen’s inexhaustible panel deserves credit for tracing the cultural and psychological axes against which all subsequent self-portraiture will plot itself. Her underappreciated painting in many ways establishes the themes that far-better-known self-portraits from Rembrandt to Cindy Sherman, Artemisia Gentileschi to Picasso, would explore in the ensuing centuries, works that have come to define not merely the respective oeuvres of those exceptional artists, but the story of art itself in the last half millennium. What keeps our eyes transfixed on those masterpieces by Van Gogh and Frida Kahlo is the poignancy of their comprehension, their hope, that perhaps some element of ourselves can survive the fleeting dabs and strokes of our moments in time, can survive as an energy that echoes across ages – an instinct that Caterina van Hemessen gave deft voice to in the confounding physics of her mysterious masterpiece.