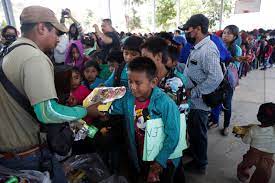 Holding balloons and homemade signs, children paraded the streets of a Mexican village, chanting slogans and calling for peace in a region where drug gangs wield deadly force.

Boys and girls in Alcozacan, a hamlet in a mountainous municipality of southern Guerrero state, enthusiastically took part in a march that included adults on Friday, when Mexico celebrated Children’s Day.

Wearing sandals and superhero T-shirts, they hoisted signs that read “We want peace” and “Stop the violence” while flashing smiles at onlookers.

“In the mountains of Guerrero, children have been condemned to survive in a garden of thorns,” Abel Barrera, head of the Tlachinollan Mountain human rights center, said at a news conference.

In an uncomfortable reminder of the violence, adult organizers of the march had originally planned to give kids tiny wooden replicas of guns that members of the community use as part of a civilian self-protection force, one local told Reuters.

Instead, they distributed toy cars and dolls after the march.

Local protection forces have popped up in parts of the country where exasperated locals have given up on the government to provide security from menacing bands of criminals.

“The guns we use are dignity, rebellion and resistance,” said one youth in a speech at a local cultural center.

Guerrero, one of Mexico’s poorest states, played host to the infamous Ayotzinapa abduction and presumed massacre of 43 students training to be teachers in 2014.

Before and since then, it has been at the crossroads of a wide range of criminal rackets, including kidnappings, extortion and illegal poppy production to make heroin.