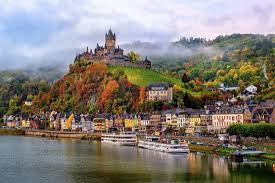 Travel is restricted because of the pandemic, but it’s still worth dreaming of holidays. Germany is a dream destination for many as the country offers beaches and mountains, historic castles and towns, forests and lakes.

Sun, sand and sea: Germany’s largest island, also called the Pearl of the Baltic Sea, belongs to the state of Mecklenburg-Western Pomerania. Bodden and bays divide the island into several peninsulas along a coast roughly 570 kilometers (340 miles) long. Rügen is also one of the sunniest regions in Germany, making picturesque Baltic resorts with their long, white beaches ― like Sellin ― popular.

Twice a day, the waters of the North Sea recede at low tide, exposing the seabed. Countless worms, snails and mussels cavort here. The landscape in the far north has even been designated a World Heritage Site by UNESCO. Schleswig-Holstein, Hamburg and Lower Saxony have all designated their parts of the Wadden Sea as national parks. Walks on the tidal flats are particularly popular.

The German capital is a magnet attracting ever more new visitors to the metropolis on the Spree River. The history of a divided Germany was written here, and many people want to feel the vibe of this place. A photo of the Brandenburg Gate is a must. Once a symbol of the division of Germany, the classicist structure made of sandstone is now once again in the center of the united and vibrant city.

One of the most beautiful small towns in Germany is located about 100 kilometers (60 miles) west of Nuremberg. It’s an inviting place to take a journey into the past. Nowhere else has so much of the Middle Ages been preserved as here. With more than 2 million visitors annually, before the pandemic Rothenburg ob der Tauber was one of the most visited sights in Bavaria.

No place represents German Rhine romanticism as much as the Loreley Rock. According to legend, a beautiful woman sits on the cliff, combing her blond hair and singing. The passing sailors are so distracted by the beautiful but unhappy mermaid that they crash. One thing, however, is certain: Ships have, in fact, repeatedly crashed at this spot on the Rhine.

The romantic castle above the old town of Heidelberg is a ruin, but since the 19th century it has been one of Germany’s most famous tourist sites. Once it was the residence of the Palatine Electors, but during the Palatine War of Succession, the castle was destroyed in 1693. The event is commemorated several times a year with the Castle Illumination, a large fireworks display over the complex.

An adventurous wild river valley: The Wutach Gorge, also known as the Grand Canyon of the Black Forest, is an impressive natural phenomenon. It is one of the last original wild river landscapes in central Europe. Over the course of time, the small river Wutach has created a valley here that is up to 200 meters deep and about 50 kilometers long. It’s an unforgettable experience for every hiker.

This beautiful natural landscape can be enjoyed in the east of Germany, near Dresden. The Saxon Switzerland National Park with its cliffs, valleys and gorges covers over 36,000 hectares (89,000 acres). Since 2006, the Malerweg, named after the Romantic painters who found their motifs here, has run through the sandstone cliffs. It’s a dream destination for nature lovers and climbers.

The largest lake in Bavaria is about 80 square kilometers (31 square miles) in size. It was formed about 10,000 years ago and has several islands. On the largest of them, the main attraction is the New Palace, which was intended to fulfill Bavarian King Ludwig II’s dream of a “Bavarian Versailles.” The magnificent building usually attracts many visitors from all over the world every year.

Germany’s largest lake is about 70 kilometers (43 miles) long, in some places 14 kilometers wide and up to 254 meters deep. It is located on the edge of the Alps in the border triangle of Germany, Austria and Switzerland. One of the highlights is the flower island of Mainau. Before the pandemic, more than a million people would visit it every year. The Spanish Steps are one of its attractions.

This remains the most popular castle of Bavarian King Ludwig II. The reclusive monarch built the castle so that he could withdraw from the public eye. But his refuge was opened to the public in 1886, soon after his death. The romantic castle in southern Bavaria is especially popular with foreign tourists.

The crystal-clear lake with the famous pilgrimage chapel of St. Bartholomew is surrounded by a magnificent Alpine mountain panorama. It’s the heart of the Berchtesgaden National Park and famous for its echo. Here you can experience impressive echo phenomena during a ride in one of the silent electric boats. It’s an ideal destination for water and mountain lovers, but also romantics and dreamers.