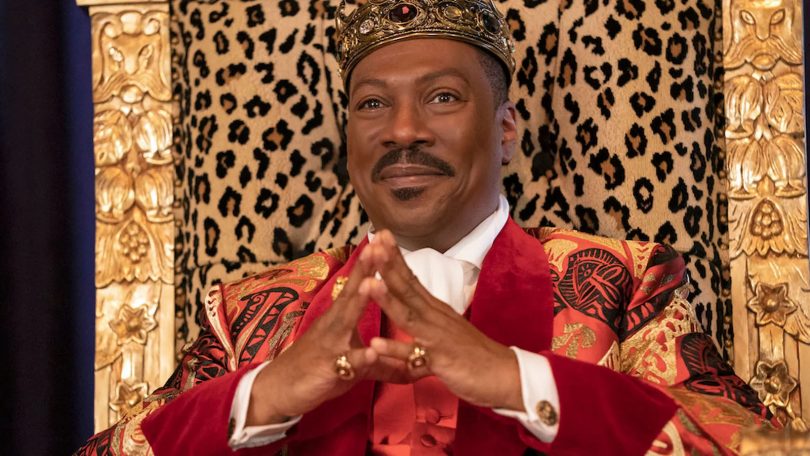 The Eddie Murphy film Coming to America busted some clichés about the continent. But, as a sequel comes out, David Jesudason asks if Western cinema will more fully change its attitude.

Released in 1988, Coming to America was a brash romantic comedy; a box-office juggernaut for Hollywood comic actor Eddie Murphy. But, despite its contrived plot and fairy-tale schmaltz, it was, in its own way, revolutionary.

Still one of Murphy’s biggest successes, it told the story of Akeem Joffer, the prince of the fictional African nation of Zamunda, as he headed to the US to find a wife and avoid an arranged marriage. In the late 1980s, it was remarkable among mainstream Western films for its depiction of Zamunda: a wealthy African country that was entirely self-reliant, worlds away from the kind of downtrodden stereotypes found elsewhere. Now, as a sequel to the film, Coming 2 America, is released, 33 years on, it is astonishing to consider how little has changed. In the intervening years, only one other widely-watched US film has depicted an empowered African society in such a manner: Marvel’s Black Panther (2018), which again featured a fictional kingdom, Wakanda.

Coming to America was only commissioned because of the star power Eddie Murphy commanded after a string of hits, including Beverly Hills Cop (1984) and 48 Hours (1982). He hired director John Landis through his own production company and fought with Paramount over the casting as the studio remained sceptical that a mainstream audience would accept a film with African characters. Only this week, Murphy revealed on the US chat show Jimmy Kimmel Live that he was told that “there has to be a white person in the movie”, resulting in the comedian Louie Anderson joining the black cast.

How Coming to America changed the game

After all, Western cinema has a long and continuing history of relegating Africans to the sidelines in films about Africa, using the continent as a backdrop for white characters’ journeys of self-discovery or moral reckoning, from The African Queen (1951) to Out of Africa (1985) to more modern thrillers like Blood Diamond (2006) and The Constant Gardener (2005). Or, if films have centred on African characters, they have done so predominantly in stories of distress and suffering, such as genocide dramas like Hotel Rwanda (2004) and Beasts of No Nation (2015).

But Murphy was determined to depict Africans as rich, equal to white people and proud of their roots. He assembled a stellar, though wholly African-American, cast around him that included fledging black talent such as Arsenio Hall and Eriq La Salle alongside trailblazers James Earl Jones and John Amos.

The film was so successful that, with a $288 million (£224 million) worldwide gross, it remains one of the most commercially successful movies ever to have a predominantly black cast (a record now held by Black Panther) and is still cherished today by many people of colour for its humour and its empowered characters. It certainly showed that global audiences wanted to see more stories about a different sort of Africa from that they were used to watching on screen.

“Coming To America set the tone [within mainstream Western cinema] for Black Panther with the African garments and the culture,” says Gabrielle Tesfaye, a US director of Ethiopian and Jamaican heritage whose 2019 film Yene Fikir, Ethiopia (My Love, Ethiopia) was nominated for a Film Africa award. “It [was] the highest grossing [black] film because black people are craving that representation. They want to see themselves more than just working on a plantation. And they also want to see themselves within an imagined state of being that is also connected to truth, like Black Panther was. It was exciting for us and we deserve to have that type of content.”

Now, Coming 2 America’s plot centres not around the search for a wife, but instead for a new heir to Zamunda – Murphy’s Akeem, having returned to Zamunda and married New York love interest Lisa (Shari Headley) at the end of the first film, is now king, but tradition states that the crown should be passed to a son and he only has daughters. However, he discovers that he does have a male successor, Lavelle (Jermaine Fowler), who was the result of a one-night stand that took place when Akeem and his best friend Semmi (Hall) visited New York in the first film. (Facial de-aging technology is used to depict this time in flashbacks). The contrived plot enables more back and forth between continents than in the first film, which was mostly set in the US, with Akeem visiting the Big Apple before returning with his newfound son back to the royal court in Zamunda.

The persistent problem of generalisation

Part of the fun of the New York section of the sequel, set as before in the borough of Queens, is to see the effect gentrification has on proceedings. But fans of the original can breathe a sigh of relief as the Queens’ My-T-Sharp barbershop has somehow withstood market forces and barber Clarence (one of the many characters played by Murphy) is still in situ arguing about boxing with Jewish customer Saul (also Murphy).  What also hasn’t changed in the intervening decades, however, is the Queens’ contingent of characters retrograde attitudes to “Africa”: they still refer to it as a homogeneous entity and again a lot of humour is derived from their assumptions about the continent. For example, when the Zamundan court servants are commanded to clean and bathe the US visitors, it is accepted as an “African” custom by them.

It’s open to debate how to interpret these jokes: on one hand, they may seem to exploit cheap stereotypes, but says Tesfaye, the perception of Africa as a monolith arguably accurately reflects part of the African-American psyche when it comes to the continent. “For the black diaspora,” Tesfaye says, “Africa becomes just one word for an entire continent. It’s important to understand that people who are a part of the history of the transatlantic slave trade don’t know where in Africa they are from. And that’s why the word Africa is a vague thing for them, because they don’t know.”

Africa is often depicted as monolithic. And I do not think there is any excuse for any filmmaker to treat the African continent in this way – Lindiwe Dovey

However, more broadly, Tesfaye believes that “Africa” is still constantly misunderstood and generalised about, in film and otherwise, because it remains such an unknown location to most Westerners. “Never seeing it for themselves,” she says, “they really don’t know how diverse it is. In the US it’s not as travelled [to] as Asia, South America or even Europe.” This ignorance is evidently what the two films in the Coming to America franchise are playing on, lampooning people’s prejudices about this “mysterious” continent.

And yet are they simply indulging in such “othering” themselves?  It is perhaps telling that, unlike Black Panther, Coming 2 America, like its prequel, was entirely shot in the US, with Zamunda’s palace actually being rapper Rick Ross’s mansion in Georgia. Lindiwe Dovey, professor of film at SOAS University of London, where she runs the African Screen Worlds project, believes that such inauthentic, generalised depictions are indefensible in 2021. “Africa is often depicted as monolithic,” she says. “And I do not think there is any excuse for any filmmaker to treat the African continent in this way.”

As well as spending more time in “Africa” than in the first film, Coming 2 America also boasts stronger female roles and actors native to the continent, such as Nomzamo Mbatha and Trevor Noah, who were both born in South Africa. Meanwhile the writing team (which this time includes an African-American writer, Black-ish creator Kenya Barris, alongside the original white screenwriters, Barry W Blaustein, and David Sheffield) have obviously tried to give Zamunda more depth by including more details of the African society and how it’s governed. Unfortunately, these details paint the kingdom as a regressive one, in which women can’t own businesses and male-only royalty is obligatory. “It sounds as though Zamunda could come to stand in for ‘Africa’ as a homogenous entity,” says Dovey, “And I worry that such ideas will simply translate into the re-confirmation of stereotypes about the African continent that aren’t true.”

By contrast, Black Panther did deal with these kinds of stereotypes head on, and subvert them, by depicting Wakanda as a progressive kingdom that had strong roles for women in its hierarchy. Wakanda could also not be construed as standing-in for the whole of Africa. Rather, it is a nation whose rulers have cut it off from the rest of the continent, while also pretending to the outside world that it is poor to prevent other countries stealing its stocks of the precious mineral vibranium – another comment on Western expectations. At the same time, unlike Zamunda’s Akeem, its ruler king T’Challa, aka the titular superhero, understands Western countries and views himself as a global player.

Another notable recent attempt to buck stereotypes about Africa was Beyoncé’s film Black is King (2020) a visual companion to her soundtrack for the 2019 reboot of The Lion King. The film slickly employs the best talent from many different countries in Africa – including Ghanaian director Blitz Bazawule – to weave together an epic musical celebrating black identity and female empowerment, specifically, and serves as a manifesto for black Americans to recover their heritage.

However, Black Panther and Black is King are both allegorical fantasies, leading to the question: where can you find inspiring representations of Africa in a real-life setting?

It’s worth mentioning Queen of Katwe (2016), about the real-life Ugandan chess prodigy Phiona Mutesi, that featured an all-black cast including Lupita Nyong’o and was directed by Indian-American film-maker Mira Nair. Sadly, unlike Black Panther and Black is King, this feelgood movie did not gain much global traction.

The real answer, of course, is to look to African cinema itself. As Tesfaye says, “there’s a lot of films set in Africa by actual African filmmakers who are portraying their people in their country in such an amazing imaginative, empowering light.”

And if the profile given to African cinema on an international platform is still paltry compared to what it deserves, then things might be changing with the advent of streaming services that allow for the wider distribution of great new films from the continent such as Ghanaian works The Burial of Kojo (directed by Bazawule) and Azali, Nigeria’s The Delivery Boy and Senegal’s Atlantique, all on Netflix.  Also positive is the broadening of Oscar voting membership to include more African members, including last year, Nigerian-born actor, film director and writer Akin Omotoso and Atlantique’s French-Senegalese director Mati Diop. With such steps taking place to amplify African filmmakers’ voices, the hope is that broad-brush misrepresentations of the continent can become a relic of the past.