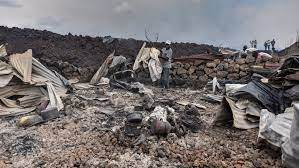 The lava that flowed from Mount Nyiragongo on Saturday evening cut a path of destruction through a northern district of Goma, eastern Democratic Republic of Congo.

Around 500 houses were flattened and the UN’s children’s agency, Unicef, says that over 100 children are missing after having been separated from their parents.

Charles Kambale has been sorting through the rubble in the spot in Buhene district where his house used to be.

“I have not seen my two youngest children yet,” he said.

He was at a wedding with this wife when the eruption began. The children, six and two, were at home with his neighbours. He said he planned to make an announcement on the radio to help find them.

Children were also picking through the rubble nearby, looking for scraps of metal or burned pots to sell.

Goma’s skyline lit up on Saturday as the lava erupted from a fissure in the side of the volcano.

Fearing that the lava would engulf parts of the city killing hundreds, as it did in 2002, thousands of people gathered their belongings and fled towards the nearby Rwandan border.

Over 3,500 people got across the border on the night of the eruption amid the gridlocked traffic.

Many of Goma’s residents are used to fleeing. Armed groups have terrorised the region for over 25 years and many people who live in the city moved there after violence hit their villages close by.

Unlike in 2002, few casualties have been reported so far.

Some children who fled the lava flow and have been separated from their parents are staying at a centre run by the Red Cross in Goma.

Red Cross workers and some government officials are trying to reunite families.

Four-year-old Benisse has been separated from his family since the eruption.

His mother was out selling fish at the marketplace when it happened and he ran from his neighbourhood with other children.

He spent most of the night walking to another town, Sake, 23km (14 miles) away from Goma, where he slept on the side of the road.

“I fled with my friends but I don’t even know where they are now, I am alone here,” Benisse told Gilbert Ramazani, who works for the government’s social affairs division.

Desperate mothers have been searching for their children going from centre to centre, to see if they have been found.

And some have found their children.

Sifa Ombene, 32, was out selling food when the eruption happened.

She rushed home but found that two of her children had fled.

“I went everywhere looking for them, I even went to the hospital morgue, they showed me bodies of dead children,” she said as she cuddled her four-year-old daughter Elea.

“I am so happy to find them here.”

All pictures by Olivia Acland.