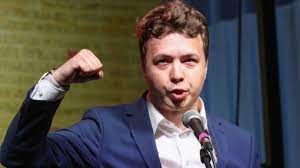 Belarusian journalist Roman Protasevich is in police detention in Minsk after the extraordinary diversion of his Ryanair flight from Greece, denounced by some as a “state hijacking”.

He and Mr Putilo – who calls himself Stepan Svetlov – were put on Belarus’s list of “individuals involved in terrorist activity” last year. The charge of causing mass unrest can be punished by up to 15 years in jail.

A passenger on the Ryanair plane, Monika Simkiene, said that as the flight was diverted to Minsk she saw Mr Protasevich panicking.

“He just turned to people and said he was facing the death penalty,” she told the AFP news agency.

His girlfriend Sofia Sapega, 23, was also arrested after the plane landed in Minsk. She is a Russian citizen and a law student at the European Humanities University in Lithuania.

The small Nexta team is based in Poland, but also works closely with Belarusian dissidents in neighbouring Lithuania. The main opposition leader, Svetlana Tikhanovskaya, lives in Lithuania. Both countries, unlike Belarus, are members of Nato and the EU.

Telegram is a secure messaging app for smartphones – it is one of very few ways Belarusian dissidents have been able to organise, as the authorities have cracked down hard on independent media, blocking opposition websites during last year’s giant protests.

The authoritarian leader has been in power for 27 years. He has maintained state control over most of the economy, with Soviet-style censorship and police who have beaten up many protesters.

Mr Protasevich has said the Nexta project receives no funding from abroad and relies on ad revenue. It was launched by Mr Putilo in 2015 as a YouTube music channel, but soon switched to focus on political content.

Mr Protasevich now works for a different Telegram channel, Belamova. He stepped in to write for it after blogger Igor Losik was arrested by the Belarusian authorities in June 2020.

Some critics question Nexta’s use of information which may not be verified. In one case, for example, a claim about the arrival of Russian special forces was later removed and described as a “mistake”, BBC Monitoring reported.

At the height of the protests last August Nexta was getting hundreds of messages an hour from citizen journalists, Mr Protasevich told the BBC.

When asked by BBC Russian if Nexta was a protest hub or a media outlet, Mr Protasevich said: “It is hard to say who we are. I guess we are primarily Belarusians who would like to come home and live in a free country without dictatorship.”

He left Belarus in 2019 and in January 2020 applied for Polish citizenship.

His parents moved to join him in Poland last August. His father Dmitry is an army reserve officer who lectured in ideology at a Belarusian military academy.

Roman’s anti-Lukashenko activities go back to 2011 – as a teenager he was expelled from school for taking part in a protest.

He was later admitted to the journalism department of Belarusian State University, but expelled from there too.

Mr Protasevich said he moved to Poland because a friend and fellow dissident, Vladimir Chudentsov, had been arrested en route to Poland.