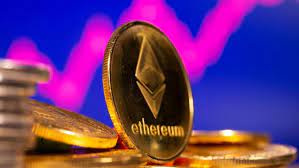 Cryptocurrency ether rose to a fresh record peak on Tuesday before dropping sharply as some investors pulled profits from a white-hot market bulging with questionable new entrants.

That still leaves it with a gain of some 340% this year. The rise is in part a spillover from flows into bitcoin, which has grown in stature as big-name investors from Elon Musk’s carmaker Tesla to Wall Street investor Stanley Druckenmiller buy in.

“What we’re seeing right now is the definition of speculative excess,” said IG Markets analyst Kyle Rodda, who likened it to the tech-bubble mania of two decades ago.

“There’s money being thrown at anything in the crypto space,” he added.

With a market capitalisation of $376 billion, traders are taking the gains in ether much more seriously and say it is catching up to bitcoin’s rise and that upgrades to the ethereum blockchain stand to make it more useful. read more

Against bitcoin the value of ether has more than doubled this year and it touched a more than two-and-a-half-year high early on Tuesday. Bitcoin , which is up 90% this year dipped to $55,625 while the U.S. dollar firmed slightly elsewhere.