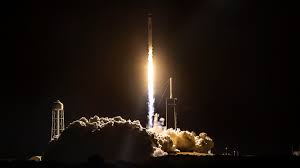 WASHINGTON DC: A ge-oscientist and a former Sp-ace Camp counselor will r-ound out the crew of the first all-civilian mission to space launching later this year.

Why it matters: The mission is one of the first true tests of the future space companies like SpaceX hope to build — one in wh-ich anyone has the chance to fly to space, even without government backing.

What’s happening: Scientist and community college professor Sian Proctor and Air Force veteran Chris Sembroski have both been chosen to fly aboard SpaceX’s Crew Dragon spacecraft as part of the Inspiration4 mission.

The full crew is now embarking on months of technical training and crew bonding experiences — li-ke alpine camping on Mou-nt Rainier — ahead of the launch.

Details: Proctor — who was a finalist to become a NASA astronaut in 2009 — won her seat after entering a contest set up by Isaacman and his company Shift4 Payments designed to reward an entrepreneur for their ambition and help support St. Jude Children’s Research Hospital.

“I feel so fortunate to ha-ve gotten the golden ticket and that I am going to space and representing the fact that it’s never too late. Hard work and perseverance has led me to this moment,” Proctor told Axios.

Sembroski’s seat was originally awarded via raffle to someone else who was unable to accept the ticket but recommended Sembroski, who also happened to enter the raffle, instead.

“I am still figuring out how in the world to thank him for this generous gift,” Sembroski told Axios.

The mission itself will be about three days, taking the crew to an orbit higher than the International Space Station, according to Isaacman.

“It’s likely we’ll be above [the] Hubble [Space Telescope] and we think that’s symbolic, too,” Isaacman told Axios.

“Not only have humans not gone that high in more than a decade, but it’s like a stepping stone towards the direction that we all know is coming next, which is the return to the Moon and to Mars and beyond going past where we’ve been comfortable for the last 20 years or so.”