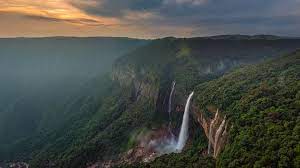 During my travels across mainland India, especially in small towns and villages in the north, I hardly saw any women-run shops or marketplaces. In a sit-down eatery in Uttar Pradesh, I watched men make flatbreads and mash vegetables for curries while male customers gobbled them up. Between Kolkata and Gorakhpur, I sat sandwiched between men in passenger trains passing through the rural countryside. On most occasions, women were absent from public spaces.

In many places in Meghalaya, women not only occupied space; they dominated them.

But in the north-eastern Indian state of Meghalaya, things were different.

While men own most businesses across India, in the Shillong market, women run the show (Credit: Zinara Rathnayake)

I returned to Meghalaya five more times before the pandemic halted my travels. During those visits, I saw that in many places in Meghalaya, women not only occupied space; they dominated them. That’s because today, Khasis – who account for state’s largest ethnic community ­– are one of the last existing matrilineal societies in the world. Here, children receive their mother’s last name, husbands move into their wife’s home, and the youngest daughters inherit the ancestral property.

But who are the Khasis?

There are many theories about their origin. According to local folklore, Khasis come from seven divine clans. In the 1967 book, The History And Culture Of The Khasi People by Hamlet Bareh, the Indian author and historian traces them to an ancient Austric race in South-East Asia who descended from a Mon-Khmer group of people in the remote Burmese jungles. While it’s uncertain when Khasis migrated west to the mountains and foothills of north-eastern India, linguistic evidence shows that their language – Khasi – has similarities to Mon-Khmer dialects.

Today, most Khasis live in Meghalaya, which became an independent state in 1972. During the Bangladesh Liberation War in 1971, some Khasi families became separated and now live across the border from Meghalaya in Bangladesh. Another significant portion of the population lives in the neighbouring Indian state of Assam.

Khasi historian Amena Nora Passah, who teaches at North-Eastern Hill University in Shillong, said that Khasis are people of oral tradition. But ironically, according to oral history, they have patriarchal roots.

As warriors who often battled with other groups for land, Khasi men often went down to the plains for clashes. During those battles, some men died. Others settled for a new life in the plains. Left without their partners, Khasi women would remarry or find other partners, and it often became difficult to determine a child’s paternity.

“Society might have labelled those children ‘illegitimate’,” said Passah. “At some point, our ancestors thought that they didn’t want this slur on their women or children. So, they decided that children should have one last name: the mother’s.”

Khasi matriliny shares similarities with the world’s other handful of matrilineal societies, such as wealth and property passing from mother to their daughters, and descent through the mother’s line.

In Khasi society, wealth, property and names are passed down from mother to daughter (Credit: craft images/Alamy)

Traditionally, Khasis live in close-knit extended families or clans. Since children take their mother’s last name, daughters ensure the continuity of the clan. Daughters have the liberty to live in their ancestral home or move out, except for the youngest daughter (called ka khadduh), who is the custodian of the property. Even after her marriage, she never leaves home. She looks after her parents and eventually becomes the head of the household after her mother’s death.

A Khasi woman never joins her husband’s household, rather he joins hers

Lauretta Sohkhlet is one of those youngest daughters from Tyrna, a scenic touristy village 65km from Shillong. Sohkhlet and her husband reside in her mother’s home. While she will inherit the property after her mother’s death, her brother, Edilbert, is the guardian of the family. As the kni (maternal uncle) of Sohkhlet’s children, Edilbert, who is a school principal in Tyrna, provides money to his sister’s family.

He lives away from his own family, which is common among some Khasi families. A Khasi woman never joins her husband’s household, rather he joins hers, but today, some men also live away from their wife and children, especially when their wife is away for work.

The youngest daughter is the custodian of the property and becomes the head of the household after her mother’s death (Credit: Nature Picture Library/Alamy)

“My wife and children live in Shillong. I go see them often, but I also have to care for my sister and mother,” said Edilbert, who’s torn between the two families. In recent years, he decided to turn part of his mother’s home into accommodation for travellers in order to earn an additional income for his sister’s family.

Passah explained the importance of the kni in Khasi culture. “As the guardian, he’s in control of the management and distribution of the ancestral property. No decision in the family was taken without the stamp of his approval,” Passah said.

She also explained that in the past, while fathers didn’t contribute financially to their children and wife, they would provide money for their sisters and parents. “[The father] would come to his wife’s home late at night. In the morning, he’s back at his mother’s home to work in the fields,” Passah said.

With colonisation and missionary education, however, some Khasis left their villages, looking for work in towns. When nuclear families emerged, the knis’ power began to decline, and while villages still follow the traditional matrilineal structure, in some urban Christian families today, fathers are the head of the household.

In some Christian Khasi families today, men are the head of the household (Credit: Leonid Plotkin/Getty Images)

“I always say that Meghalaya is a matrilineal society with patriarchal nuances,” Passah said, explaining that it is different than a matriarchy where women rule society and government.

Despite that, it’s easy to notice differences in Khasi culture compared to male-dominated regions of India. While it’s common for women to be catcalled or face other forms of street harassment in India, I encountered none of that in Meghalaya. Strangers didn’t force conversations with me, but if I had trouble finding my way, they always helped me.

In Shillong, I travelled with locals in crowded public taxis, and male passengers respected my privacy and made sure I was comfortable. Unlike in other remote locations in India, women here lead independent lives, like my host from Mawsynram, a quaint village that’s considered one of the rainiest places on Earth. My host, who was in her late 30s, lived alone and was unmarried – which might be considered taboo elsewhere in India. When she instructed male drivers to take me to caves and waterfalls, they always listened to her. And while people in India always ask me if my parents (mostly my father) are okay with me travelling alone, this question has never popped up in Meghalaya.

So when Khasi author Daribha Lyndem told me recently that says she feels safer in Meghalaya than in Mumbai where she now lives, I understood where she was coming from.

“In my experience, I feel men are respectful [to women] in a less patronising manner,” she said. Lyndem added that unlike most parts of India, Khasi women don’t have to contend with the pressures of arranged marriages. “Not to say that misogyny does not exist, but in Meghalaya, women’s voices may be ignored rather than stifled like in the rest of the country,” Lyndem added. “Girls being born is as much a celebration as boys being born.”

Patricia Mukhim, an activist and editor at The Shillong Times, an English-language newspaper, said that in the rest of India, patriarchy is embedded in all aspects of life, “from men making decisions to women not occupying a place in politics, academia, business and every other sphere”. While girls elsewhere in India often face barriers to study and work, Mukhim believes things are different with Khasis. “Khasi women enjoy social mobility and there are no bars for them to [achieve economic mobility],” she said.

I was reminded of one of the female elders I met who ran the wholesale vegetable market back at Lewduh. She’d told me that during her youth she had left her husband, raising her children on her own while trading vegetables.

As more Khasis move away from their close-knit clans, there’s a new burden on mothers (Credit Leonid Plotkin/Alamy)

“He wasn’t competent enough to provide for us. I didn’t need his support so I asked him to leave,” she said, noting that she’s had multiple partners since. As the youngest daughter, she became the custodian of her family property and she now manages a team of male and female traders.

But as more Khasis migrate to towns and move away from their large, close-knit clans, there’s a new burden on mothers. “[According to the matrilineal tradition], men aren’t obliged to care for their children when he leaves. This has led to a surge in women-headed households [in Meghalaya]. In the past, the extended family would support the abandoned mother, but now we have smaller families and the mother has to rely on herself,” Mukhim said.

In addition, some men in Meghalaya are campaigning for change. An organisation called Syngkong Rympei Thymmai, a sort of modern-day men’s-liberation group, is fighting to end the matrilineal system. One such man told BBC News, they “do not want to bring women down … we just want to bring the men up to where the women are.”

Accordking to Mukhim: “They feel that because children carry the mother’s name, they are neither here nor there. They hold the view that men don’t feel secure enough in their wife’s home nor their own family because they have left their parental home.”

Khasis’ ancient matrilineal practices are so embedded in their lives that many feel their unique society will survive into the future (Credit: Nature Picture Library/Alamy)

Passah said that only a minority of Khasis support this idea to abolish matriliny. “Look, it’s a society in transition. Some families are already giving an equal share of the property. The youngest daughter might get the major share because she’s responsible to look after the ageing parents,” Passah explained.

Although some Khasi fathers now head up certain households, Passah – like most people in Meghalaya – believes that age-old Khasi cultural practices through the mother’s line are so embedded in their lives that Khasi’s unique matriliny will survive for decades to come.

Meanwhile, things are also evolving for Khasi women. The traditional matrilineal society has always kept women out of the larger decision-making process in social institutions like the village council. But in recent times, Passah believes that it’s slowly beginning to improve, especially in urban localities. “I’m one of the two women at the village council in my colony,” she said. “We’ve never had women there, so this is a step forward.”