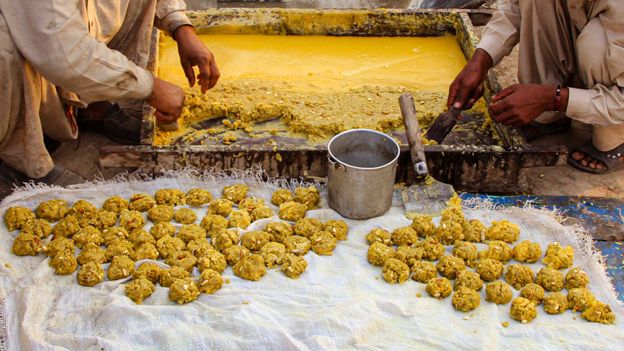 A staunch follower of the unwritten manifesto of South Asian mothers and grandmothers everywhere, my mother thinks there are few ailments she can’t treat at home with food. One ingredient in particular features regularly in her remedy arsenal. And unlike many of the peculiar poultices she applies and acrid concoctions she brews, this one is an easy pill – or lump – to swallow.

The first time I tasted jaggery, I dubiously watched the slowly liquifying lump of molten-gold cane sugar ooze into flaky crevices of a layered paratha. It had been “prescribed” to me by my mother in Pakistan’s Khyber Pakhtunkhwa province because I had a bone-chilling cold. Against the rugged landscape of imposing mountains fencing the Karakoram Highway, I wondered how something that looked so decadent could be considered healthy. But soon after I bit into the complex sweetness, I felt a rush of energy and warmth. As I would soon find out, this was more than an indigenous medicinal food or a delectable dessert. It was the concentrated essence of millennia-old tradition.

Jaggery (called gud in Pakistan) is an unrefined sugar that’s made by evaporating freshly pressed sugarcane juice (and, in some regions, Palmyrah palm, coconut-palm or date-palm sap extracted via tapping techniques) and cooling the thickened liquid in moulds. Its many monikers across South Asia and close parallels beyond, such as panela in Colombia and much of the Caribbean, kokuto in Japan and rapadura in Brazil – just to name a few – attest to its ubiquity.

India, which cultivates hundreds of varieties of sugarcane, produces more than 70% of the world’s jaggery (Credit: Tariq Sulemani/Getty Images)

The Food and Agriculture Organization of the United Nations recognises these dehydrated sugar cane juices (and their products) for their non-centrifugated nature, meaning glucose, fructose and mineral residue are maintained instead of being lost in extensive refinement or spinning. While the refining process for white sugar removes “impurities”, it also strips the sugar of micronutrients. Meanwhile, jaggery’s unrefined nature means trace minerals and molasses residue are retained even after the evaporation process, with molasses giving jaggery both its tinge (which ranges in hue from sandstone to chocolate brown) and some reputed health benefits, such as small amounts of calcium and magnesium.

But jaggery’s ubiquity in the subcontinent may have arisen out of necessity.

“Jaggery may have emerged as a way to preserve the sugarcane harvest,” said Professor Dr Hakim Abdul Hannan, director of research and development at Hamdard University in Karachi, Pakistan, “So ancient man could have a touch of sweetness all year round.”

You may also be interested in:
• A poor man’s burger McDonalds ‘stole’
• Is sugar really bad for you?
• Pakistan’s ingenious solutions to life

Believed to have been introduced to the Indian subcontinent around 6000BC via the Malayan Peninsula and Burma, sugarcane, “provides the cheapest form of energy-giving food with the lowest unit of land area per unit of energy produced,” notes A C Barnes in his book Agriculture of the sugar-cane. India, which cultivates hundreds of varieties of sugarcane, produces more than 70% of the world’s jaggery. And the intertwined pre-partition history of India, Pakistan and Bangladesh accounts for its widespread production and consumption throughout the region.

Its flavour is the hallmark of both sweet and savoury South Asian dishes, with food scientist Harold McGee explaining how cane sugar’s “distinct, winey aroma contributes to the flavour of Indian, Thai, Burmese and other South Asian and African cuisines,” in his book On Food And Cooking: The Science And Lore Of The Kitchen.

Jaggery is beloved across South Asia, where it is used both as a sweetener and a medicinal food (Credit: Saqib Rafique)

In Pakistan, jute bags overflowing with jaggery in both its granular and rock-like form are common in wholesale markets of metropolitan cities, such as Jodia Bazaar in Karachi. The sweet nuggets are perceived as morsels of wondrous goodness from nature that bring sweetness, connection and warmth. At home, jaggery is brought out when a craving for sweets strikes, sucked on almost as a lozenge or cough drop, offered to guests as an accompaniment to tea, or even used to reward children with – a subcontinental equivalent to the cookie jar.

Its depth of flavour – a multi-faceted richness difficult to replicate with the single note of sweetness in white sugar – makes it a quintessential staple in traditional recipes. Travellers will find it in the indulgent halwa and mithai (Indian sweets) that grace the shelves of many sweetmeat shops, including til laddoo (sesame seeds roasted and combined with a thickened jaggery liquid, often with coconut and peanuts and rolled in balls) or elaborate halwa varieties such as gud makhandi halwa and some variants of the famous Multani sohan halwa.

Rural memories of childhood, especially in the Pakistani province of Punjab, are incomplete without jaggery rice, a sumptuous sweet rice dish often garnished with coconut and almonds. And jaggery chai is ubiquitous at truck stops as soon as you enter Pakistan’s colder northern provinces, such as Khyber Pakhtunkhwa, where I first tried it – so much so that one is hard-pressed to find the white sugar alternative as jaggery lends a unique earthy and fortifying aromatic nuttiness to the tea.

In Pakistan, the repertoire of sweet treats prepared with jaggery is also inextricable from festive or auspicious occasions, often distributed at weddings or sold on pushcarts as beloved by children as the West’s ice-cream trucks. “Growing up, I used to wait for the theilay-wala (pushcart vendor) selling chikki (peanut or sesame infused jaggery brittle) and rush out as soon as I heard the familiar jingle,” said Zia Tabarak, who runs the YouTube channel StreetFoodPK.

Jaggery can be enjoyed as a standalone sweet or used to make mouth-watering desserts (Credit: Subodhsathe/Getty Images)

Decades later, Tabarak profiled jaggery’s vibrant production cottage industry in Charsadda, a town in Khyber Pakhtunkhwa. The artisans’ process is both rustic and revolutionary because they use bagasse (the fibrous pulp which remains after the sugarcanes stalks are pulverised for their juice) for fuel, making it a zero-waste initiative. For Tabarak, like many others, jaggery holds immense sentimental value. “Finally getting to see how ‘nature’s lollipop’ is made was like a fairy-tale,” he said.

Its popularity in Pakistan makes it a ritualistic part of life at all ages. Women in rural Pakistan use it to ease premenstrual cramps or expedite labour, and infants and children are often given jaggery by their parents to prevent anaemia. Many Pakistani elders end their meals with a lump of jaggery to aid digestion and turn to it for relief from joint pain and inflammation, advising their children to do the same.

The traditional sweetener’s widespread use for wellness across the subcontinent is rooted in its millennia-old history as a medicinal sugar. Gud, especially purana gud (aged jaggery; generally one to three years old is considered most potent) appears in historical medical scripture like the Sushrata Samhita, a Sanskrit treatise on medicine and surgery, with references citing its benefits in purifying blood, alleviating bile disorders and preventing rheumatic disease.

Furthermore, its use in balancing vata dosha, one of the three energies believed in Ayurveda to compose each human body in a unique ratio, leads to its prominence in holistic healing preparations. It’s often used as a base to make other decoctions more palatable and, interestingly, is also included in Ayurvedic panchakarma therapy, known as one of the most extreme cleanses on Earth due to the rigorous approach to detoxing every orifice and eating a largely limited diet of khichdi (a rice and lentil dish) and ghee (clarified butter) with the occasional incorporation of jaggery.

Jaggery is made by evaporating freshly pressed sugarcane juice and cooling the thickened liquid in moulds (Credit: Amir Mukhtar/Getty Images)

“It’s our indigenous treasure chest of nutrients like calcium, phosphorus, iron and magnesium,” said Dr Muhammad Naveed, a homeopathic doctor and eastern medicine practitioner in Karachi, who prescribes it to “build immunity, detoxify the liver, alleviate constipation, as an expectorant for phlegm and even a lactating aid for nursing mothers when ground with cumin”.

But according to Dr Sarah Nadeem in the Department of Medicine, Section of Endocrinology and Director CITRIC (Centre for Clinical Best Practices) at the Aga Khan University in Karachi, the health halo-effect and diabetics’ refusal to acknowledge jaggery as sugar – no matter how unrefined – is potentially dangerous.

“A diabetic’s body doesn’t care if it’s white sugar or jaggery,” she said, advising against viewing it as a liquid panacea. “Since jaggery’s a little more complex [than white sugar], the insulin spike may come a bit later, but it’s still a calorically dense carbohydrate. It [the spike] will inevitably come.”

To benefit from the micronutrients referenced in studies, she explained, one would need to consume a great deal of jaggery – much higher than the recommended intake. “The iron that’s referenced is likely leached from the pans jaggery is prepared and stored in,” she said. Nadeem regularly counsels patients who paint nostalgic pictures of their virile elders and attribute much of their longevity and health to functional foods such as ghee and jaggery.

However, the cultural importance and meaning of jaggery in Pakistan cannot be overlooked. Here, it’s more than an ingredient; it’s a mindset of taking from the land and using food to combat illness, ward off colds or provide a quick energy boost – a philosophy internalised by many to this day and passed down through the generations. My daughter’s first sweetener was jaggery, and I know that if she ever has a cold, I’ll resort to a gud-slathered paratha to perk her up – as my mother did for me and her mother did for her.

“It represents a way of life and living as close to nature as possible,” Hanaan said.