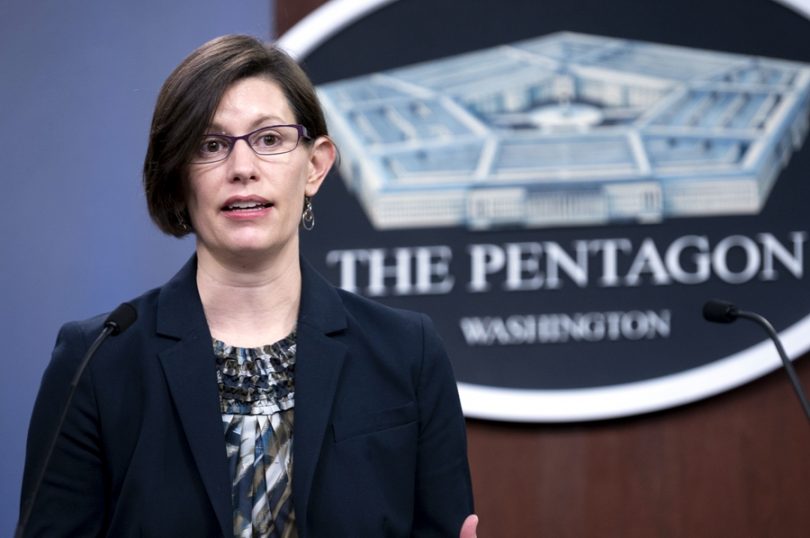 WASHINGTON DC: On Thursday, Press Secretary John F. Kirby gave statement on the International Transgender Day of Visibility, he said that U.S proudly recognize transgender and gender-non-conforming people and their continued struggle for a life of equality, security and dignity.

There is no place for violence and discrimination on the basis of sexual orientation, gender identity or expression, or sex characteristics, Kirby commented.

The department, along with our partners in the United States, will lead by example in the cause of advancing the human rights of LGBTIQ people around the world, he said.

Pentagon Press Secretary further divulged that, back in January, the president issued two executive orders impacting departmental policy with respect to transgender individuals. Executive Order 13988, which is entitled “Preventing and Combating Discrimination on the Basis of Gender Identity or Sexual Orientation”, and Executive Order 14004, entitled Enabling All Qualified Americans to Serve Their Country in Uniform”, he added.

In response to those executive orders, the department immediately issued interim guidance to hold in abeyance any adverse personnel actions initiated under previous departmental policy, and directed the identification and review of records of any member involuntarily separated, discharged, or denied reenlistment based on gender identity, Kirby commented.

DOD Instruction 613-0.03, Volume One is entitled “Medical Standards for Military Service: Appoint-ment, Enlistment or Induc-tion,” and DOD Instruction 1300.28, which is entitled “In-Service Transition for Transgender Service members”, he further added.

The department is announcing the publication of revised editions of these two instructions. The revised policies in these instructions restore the department’s original 2016 policies regarding transgender service, he said.

Kirby emphasized saying that specifically, they prohibit discrimination on the basis of gender identity or an individual’s identification as transgender.

They provide a means by which to access into the military in one’s self-identified gender, provided all appropriate standards are met, he said.

They provide a path for those in service for medical treatment, gender transition, and recognition in one’s self-identified gender and they seek to protect the privacy of all service members and to treat them with dignity and respect at all times, Kirby commented.

Commenting on the guidelines and policies, he remarked that these policies will be effective in 30 days, affording the military services the necessary time to update service-level policies and provide guidance to commanders, service members, medical professionals, and other communities of practice, as appropriate.

During this period, the department’s interim guidance, issued on January 29th of this year, remains in effect, he said.

The secretary of defense strongly believes that the all-volunteer force thrives when it is composed of diverse Americans who can meet the high standards for military service, and an in-clusive force that strengthen our national security posture, Press Secretary Kirby commented.

Digging into the details he added that as emphasized from his original statement on this matter, and I quote him here, “The United States Armed Forces are in the business of defending our fellow citizens from our enemies, foreign and domestic. I believe we accomplish that mission more effectively when we represent all our fellow citizens.”

Moreover, Stephanie Miller remarked on the new transgender policies saying that transgender applicants will certainly need to meet all other medical standards, to include those standards that may be associated specifically with cross-sex hormone therapy, a previous diagnosis of gender dysphoria, or any form of surgical intervention.

In the report, you’ll see that in the quarter, and again, these numbers may likely vary as time goes on there were 99 deaths by suicide in the active component, 57 in the reserve component. But at this time it’s too early to determine whether suicide rates are going to show an increase or a decrease for calendar year 2020. Anyway, it’s up on our site and you’re welcome to look at it, Stephanie remarked.

She provided more details saying that the health, safety, and well-being of our military community is paramount to the readiness of our force. Every death by suicide is a tragedy and every one results in a grieving family for which we share that grief, she added.

While briefing the media, Pentagon press secretary commented that secretary spoke with his Indonesian counterpart, the Indonesian Minister of Defense Prabowo Subianto on the phone to reaffirm importance of the bilateral defense relationship.

Kirby mentioned more details saying that the Minister congratulated Secretary Austin on his appointment as Secretary of Defense. And Secretary Austin expressed his condolences on the recent terrorist attacks in Makassar and Jakarta.

Secretary Austin and Minister Prabowo discussed the regional security environment including the challenging situation in the South China Sea as well as bilateral defense cooperation, he said.

Russia’s destabilizing actions undermine the de-escalation intentions that had been achieved through an OSCE-brokered agreement back in July of last year, he said. Additionally, we are aware of Ukrainian military reports concerning Russian troop movements on Ukraine’s borders, Pentagon press secretary commented.

Commenting on the matter, he also divulged that we’re discussing our concerns about this increase in tensions and cease fire violations and regional tensions with NATO allies.

Adding that the National Security Advisor Jake Sullivan spoke Monday with his Ukrainian counterpart, the Head of Presidential Office Andriy Yermak, he said.

Moreover, the press secretary added that Chairman Milley made calls to both Russian and Ukrainian counterparts and it’s safe to assume that this was certainly a topic of those discussions, he said.