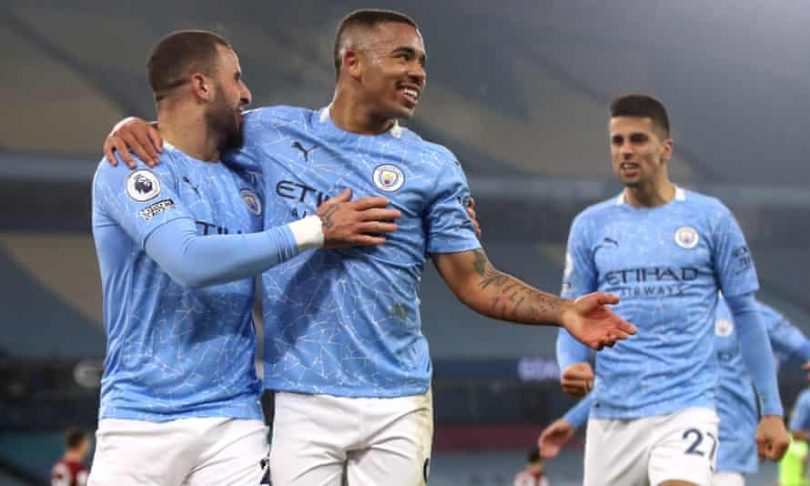 Manchester City’s record sequence of victories now stands at 21 thanks to two late goals from Gabriel Jesus and another by Riyad Mahrez. Their relentless thirst was evident, City bombarding Wolves’ goal until they moved from 1-1 on 80 minutes to run out clear winners.

First, Jesus turned home Kyle Walker’s cross from the right, then Mahrez was set up by Ilkay Gündogan and Raheem Sterling, before Jesus turned home a Rui Patrício parry in added time as City powered 15 points clear at the top.

It is impressive how Guardiola continues to draw such performances from his players in a hectic schedule.

“The record, we will talk about in the future,” he said. “In winter time – November, December, January in England – it is hell.

“There are 33 points to play for – to win the Premier League we need more points. Manchester United. That’s all we care [about now]. Tomorrow our opponents will play, we have one or two days off and then prepare.”

City, who also equalled a clubrecord 28 matches unbeaten, can dream of surpassing Bayern Munich’s record mark of 23 straight wins for Europe’s top five leagues, are leaving United way behind with 11 games left. Even if United win Sunday’s derby it will remain City’s title to lose.

They hogged the ball against Wolves but as against West Ham last time out were unable to convert this into a telling advantage until close to the end of the game.

Wolves began as many sides do against City – defending – and João Cancelo slipped in Sterling whose shot was parried by Rui Patrício.

A familiar pattern was emerging: City tapping percussive passes around and when possession was ceded their pressing was ruthless. Mahrez floated in a cross towards a leaping Sterling and Patrício punched away.

The keeper was helpless when City struck, though. After a fluid move in which Rodri fed Cancelo who fed Kevin De Bruyne who returned the ball to Rodri. The Spaniard hit Mahrez with a curving pass that dropped into the Algerian in the right channel. He took in his stride and zipped in a cross that led to Leander Dendoncker scoring an own goal as Sterling lurked.

It felt like the contest was already over after a quarter of an hour unless Wolves could stop the blue wave flooding them again. They looked strongest when trying to hem City in close to Ederson’s goal. Wolves had succeeded in moving the contest into the middle third, to their encouragement, but City upped tempo and a whirl of passes ended with Mahrez going in behind and Wolves just about survived.

Mahrez was in the mood but as throughout the half – his assist apart – the final ball was lacking.

Laporte had a goal ruled offside by VAR – it was marginal – and Bernardo Silva’s effort on the stroke of halftime was saved well, to his left, by Patrício. A glaring half-time statistic was that Wolves had yet to enter City’sarea.

The home side kept up the pressure and Patrício was forced into fingertip saves from De Bruyne and Mahrez.

Still, there was no City second and Guardiola’s concern was obvious in the technical area. West Ham had nicked an equaliser before the break and the manager did not want his side to again be pulled back given their control. But they were sucker-punched.https://www.theguardian.com/email/form/plaintone/4163The Fiver: sign up and get our daily football email.

A Rodri foul on João Moutinho won Wolves a free-kick. Moutinho swung the ball in from the right and as Rodri and Dias lost Conor Coady, the captain headed in expertly, to Ederson’s left.

“Players felt it was unfair after what had happened,” said Guardiola. “But it’s a good lesson for the knock-out games as good players can punish you.”

Any thoughts that Wolves could nick a point were washed away by a wave of pressure. City swamped the visitors and three goals in those last painful minutes did not flatter the leaders.

Nuno Espírito Santo said: “It is difficult to execute your gameplan against Man City.”