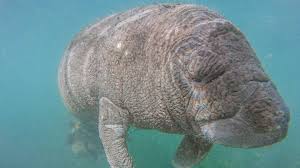 CALIFORNIA (Axios): Manatees are starving to death in record numbers from famine caused by fertilizer runoff and pollution.

Driving the news: Environmental reporter Craig Pittman points out the link between 435 manatee deaths so far this year and the 2017 decision by the U.S. Fish and Wildlife Service — based on problematic assumptions and ignoring public sentiment — to reclassify the sea cows from “endangered” to “threatened.”

At this pace, unless something is done, a third of the entire population could be dead by year’s end.