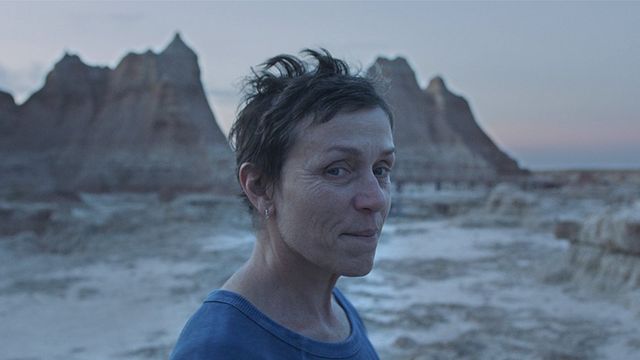 Two years after she died in 2012, a book was published containing much of her best work. The Most of Nora Ephron is a testament to her genius, from the script for When Harry Met Sally, to her 1973 essay on Dorothy Parker.

She wrote a piece in 2003 about getting old, a rich subject for a witty writer. It was called I Feel Bad About My Neck, and describes – in a masterclass of non-fiction prose – the undisguisable tell-tale signs of ageing as seen around the neck, which she identifies as starting at 43 years old.

I only mention this because it reminded me of a Frances McDormand quote in the New York Times a while back, when she was talking about playing the eponymous Olive Kitteridge in the 2014 television mini-series.

The role required the then 57-year-old McDormand and her screen husband, Richard Jenkins, to play characters who age from their early 40s to their mid-70s. Jenkins used tape under his chin to tighten up his skin above the collar line. McDormand chose not to. Until, that is, the director (Lisa Cholodenko) sat her down for a chat after a camera test and asked if the actress had read Nora Ephron’s essay about her neck.

Nora liked to compile lists, such as “What I Will Miss”, and “‘What I Won’t Miss”.

A 2006 list titled, “What I Wish I’d Known”, begins with: People have only one way of being. As ever, Ephron was being perceptive, smart, and correct with an observation that applies even when it comes to actors of the calibre of Ms McDormand.

On the one hand, she has great range – taking on characters that vary wildly.

But on the other, she always imbues them with an unmistakable Frances McDormandness.

Take, for example, the two movies for which she has won an Oscar (Fargo, and Three Billboards Outside Ebbing, Missouri), and the movie she is probably about to win another Oscar (Nomadland).

The three women she plays in these three films, which span a quarter of a century, could be sisters. Marge (Fargo), Mildred (Three Billboards) and Fern (Nomadland) share an inherent kindness and quirkiness. They are all at-once semi-detached and warmly empathetic.

Fern is the most circumspect of the trio.

We meet her shortly after her settled life in Empire, Nevada was devastated by the death of her husband, a blow to the 61-year-old Fern, that is quickly followed by the economic collapse of the entire town due to the closure of a factory around which it had grown. Empire been “discontinued”, its zip code erased along with Fern’s sense of place.

She is discombobulated but resolute.

Fern might not have a home but, she figures, that doesn’t mean she is homeless.

Not while she’s still got Vanguard, her trusty Ford Econoline van, which she has turned into a modest but adequate RV. She rolls out of town and doesn’t stop rolling. She doesn’t know exactly where she’s going, but there’s one thing for sure, she ain’t coming back.

And so, a new life starts for this mild-mannered, middle-aged woman.

It’s a life on the open road for Fern, travelling through America’s epic landscape, picking up seasonal jobs here and there, and meeting fellow nomads who, like her, have experienced a rude awaking from their American Dream.

They are largely from the Boomer generation, folk her age and a bit older, who were knocked sideways by the 2008 financial crash, when the future they had worked so hard for proved to be a mirage in the desert of capitalism.

You might expect to see a mixture of fury, resentment, sadness, and defeat. But no, instead there is a prevailing sense of peace, serenity and belonging.

As Fern travels from place-to-place and meets more and more people roaming the American West, she realises she has stumbled upon a previously unknown community to whom she can relate.

A group of people like her, people who have shed the concrete skin of modern life to be at one with nature.

People who have found a connection between each other established over a mug of coffee on a dusty verge, rather than through cyberspace on social media. A puncture repair kit is about as high-tech as their life gets.

We find out more about Fern as she picks through the few items she’s chosen to take with her. There’s an old photo with her husband when they were young, a plate or two with a nice pattern, and some craft materials. She’s a friendly soul but wants to be left alone to mull things over, to work something out; to find a new meaning to her life.

There is a thoughtfulness, a seriousness even, that runs through the film.

It is a contemplative movie, which, like Fern’s van, moves slowly. Several of the nomads she encounters along the way are the real deal, bone fide members of the contemporary nomadic community with whom McDormand and director-writer Chloé Zhao collaborated.

That the Oscar-winning film star is able to appear completely in tune with their lives and psyche is a reflection not only on her skills as an actor, but also, a reflection of her own nature.

Zhao and McDormand don’t give Fern a completely free ride. There is the complication of a potential love interest in the shape of gentle Dave (David Strathairn), who takes a shine to our lady in the van. Fern has a decision to make about him, and another about whether or not to pursue her peripatetic lifestyle.

Temptation is put in her way.

A warm bed and a hot bath have their attractions. But then, so does floating naked in a lake in high summer without a care in the world.

The movie has received criticism for the positive way it depicts Fern’s stint working in an Amazon distribution centre. I have to say, it did strike me as a little too good to be true, and jarred somewhat in a film that is implicitly critical about the impact big business has on people’s lives and the natural world.

Beyond that, Zhao’s directing is superb.

The shots of the “American Sublime” are gorgeous, while her close-quarters work among the nomads’ camps and RVs touches on cinema vérité, which, of course, much of it is.

Not only are the non-actors an integral part of the film’s documentary aesthetic, but so is its source material, a 2017 book called Nomadland: Surviving America in the Twenty-First Century. It was written by Jessica Bruder, who spent months embedded gonzo-style with the country’s nomadic communities.

The film deserves the plaudits and awards it’s receiving, although I’d give the equally philosophical Minari the Best Picture Oscar.

McDormand is terrific throughout.

It is unusual for stories like Nomadland to receive the sort of coverage the film has garnered. The actress has used her talents and celebrity to shine a light on an area of life, and the people who inhabit it, which few knew about or appreciated. What’s more, she’s done it without having to wear make-up or use tape to hide the creases in her neck.