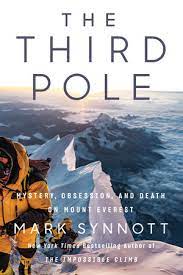 Mark Synnott’s The Third Pole transport readers to Mount Everest during the 2019 climbing season as he searches for the remains of Sandy Irvine that may help prove the British summited Everest in the 1920s.

This was an interesting look into Synnott’s quest to find the body of Irvine who was lost on Everest in 1924.

A mountaineer and rock climber himself, Synnott skillfully describes early 20th century exploration, then dives into a story about Everest that merges mystery, adventure and history into a single tragic bundle.

Synnott writes a compelling story that combines the 2019 season on Everest, historical attempts to climb Mt. Everest, and mountaineering culture as a whole.

He “describes horror stories about frostbite and strokes (blood clots are more likely at high altitudes) and oxygen tanks that hit empty at the worst possible moment,” Edward Dolnick said in a review for The New York Times.

Synnott “knows how to keep readers turning the pages, and they will speed their way to his mystery’s resolution. But any Everest story today has an unavoidable dark side.” said Dolnick.