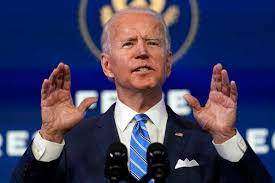 WASHINGTON (Axios): President Biden spent his first 100 days trying to engineer the end of the coronavirus and start of a job boom. The next 100 are more audacious and risky: Try to re-engineer the very fundamentals of America — inequality, voting rights and government’s role in directing economic growth.

Why it matters: Biden advisers feel they have a huge opening to raise taxes and pick winners in the energy markets, in part because Republicans and business no longer lock arms — and wallets — in opposition to the reordering of capitalism.

“He wants to take an even bigger bite at the apple,” said one confidant. “He has full confidence in himself.”

One top Biden adviser added: “[T]he American people are more interested in the results Biden delivers than how he got those results.”

So look for Biden to court Republicans, but not yield to them, as he pushes a $2.3 trillion infrastructure package, to be followed by $1.5 trillion for his American Families Plan — including child care, paid family leave, universal pre-K and free community college.

Between the lines: The Biden next-100-day agenda is more activist than most expected. But, three data-backed trends have encouraged his team to push the envelope:

His poll numbers are strong: Over the weekend, Fox News put his approval at 54%, NBC News at 53%, and ABC News/Washington Post at 52%.

The economy is growing — and many think it’s poised for an historic boom. In Biden’s address to Congress on Wednesday night, look for him to point to the recovery as a vindication of his strategy so far.

Corporations are cutting off, or cutting down, money to the GOP, which has been forced to find other sources of cash. And CEOs are taking public stands that sound a lot more Biden than Trump.

The No. 1 emotion we hear from Biden officials is urgency:

Biden knows his Senate majority is perilous — he’s one elderly senator’s health crisis away from it collapsing.

Many of the same officials in charge of Biden’s program have fresh memories of the summer of 2009. Doomed negotiations with Republicans over the Affordable Care Act extended into the August recess. That gave well-funded Republican groups the chance to gather forces and bludgeon Democrats in their home districts. This helped create the conditions for the bloodbath of the 2010 midterms.

To be clear: The conditions here are different. Biden’s proposals are far more popular — even his tax proposals. This package is proving far harder to demonize than Obamacare.

But Biden is racing against several self-imposed clocks. He doesn’t want his infrastructure dragging through the fall — and risk slipping into next year.